The Mercedes eats up luggage and big journeys with ease. A ‘demotion’ from 20 to 19-inch wheels has made a big difference to refinement, too. Our only slight disappointment has been with the diesel engine’s fuel consumption.

A major change to our Mercedes E 220 d has split the office into two camps. Why? It’s all down to the wheels.

Half of us loved the way the car looked on its optional 20-inch AMG alloys, and thought it was worth the resulting slightly harsher ride and elevated road noise. The other half, including me, felt the low-profile tyres were just not up to the job of smoothing out potholes, and ruined the car’s refinement.

To help settle this pitch battle, Mercedes offered to swap our car on to the standard 19-inch wheels so we could feel the difference. Once it arrived back, there was no doubt that the E 220 d doesn’t look quite as stylish, and it has lost a little in the way of steering precision.

However, in every other respect it’s vastly improved, and is a much better car as a result. It’s quieter on all road surfaces, especially concrete motorways, and the harsh ‘crashing’ which affected it over tarmac imperfections has almost disappeared. My advice for buyers is to save £595 and stick with the standard wheels. 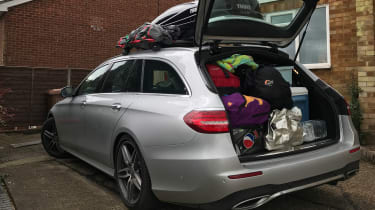 The more absorbent rubber has helped the E-Class become the flawless mile muncher it should always have been – and an effortless, economical car is always going to be perfect for holidays. Our Mercedes has already been to France and has completed three camping trips, including a mammoth seven-hour drive from Hertfordshire down to Cornwall. Such holidays with a family of four demand space, and even though the E 220 d has a whopping 640-litre boot capacity, more was needed.

So we bolted on some Thule Wingbars, which were £40 cheaper than Mercedes’ own versions and were the Best Buy in our product test. On to them went a trusty second-hand Thule 200 roofbox for even more camping carrying capacity.

Loading up the car caused a surprising issue, though: constant operation of the power boot release meant the battery charge level became ‘critical’. We knew because the car actually E-mailed us, suggesting we connect to a charger or go for a long drive. 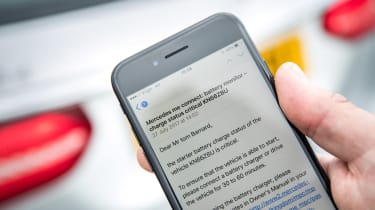 With the engine started, the roof box and boot crammed and four on board, the Mercedes wafted down the congested roads effortlessly – there are few better cars in which to tackle a fully-laden, seven-hour trip.

The on-board computer also demanded some AdBlue exhaust additive at 7,800 miles and suggested a litre of oil at 9,300 miles. Both were easy enough to sort out, and cost less than £15 each to fill up.

That’s led us to form more opposing camps in the office. Is diesel still the best powertrain for a big car like this? When we come to the end of our six monthswith the E-Class, we might have an answer. After all the nights under canvas, perhaps we’ll even be experts in our field. 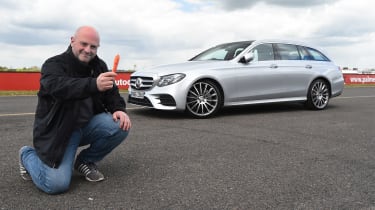 It’s the time of year when most of us are waking up in daylight and getting back home before the sun has set. It’s blissful. And yet, I’m a little sad, as I’m not getting to use my favourite gadget on our new Mercedes E-Class Estate.

The big wagon is packed with technology, but it’s the clever headlamps  which have really dazzled us. There’s no need to munch on carrots to be able to see in the dark when you’re driving the Mercedes, as they can almost turn the night into day.

The lamps use 84 LEDs, each controlled by a camera and sat-nav data to make sure the maximum amount of light is spread around and that it’s not dazzling to other road users. It’s – quite literally – brilliant. 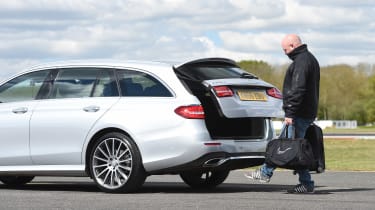 The headlamps are just one of the options on my car. The various packages and goodies have added nearly £10,000 to the £41,170 list price of the E 220 d AMG Line Estate. Some of them have been wise investments, others are more difficult to recommend. Perhaps the most surprising is the need to pay £1,595 to have real leather upholstery. The car comes as standard with artificial hide, but actually, Mercedes’ fake leather feels posher than the real cow you get in cheaper cars.

We spent the savings here on Drive Pilot, a gadget which means the E-Class will almost drive itself. Once you have mastered the bewildering steering column stalk layout, you can set the cruise control knowing that the car will steer in traffic up to your set speed without having to touch the pedals. It’s an encouraging step towards a fully autonomous car and – almost – works perfectly.

It tries to save your licence by reading speed limit signs too, and changing the set speed to match the posted maximum. It’s got an alarming glitch though, as the camera often misinterprets random numbers from other signs as a speed limit. More than once I’ve been overtaking a lorry with a “This Vehicle Is Limited To 52mph” sticker and the car has read that and suddenly cut the power. 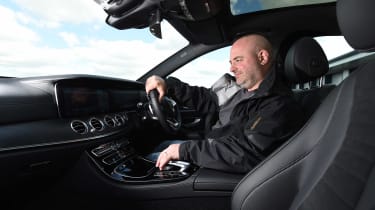 Another self-driving gadget that’s less useful but still a great party trick is Mercedes’ app that lets you extract the car from a parking space using your phone. My only gripe is that Mercedes makes you pay for a subscription. I took the £14 three-month option just to try it out, but it’s unlikely I’ll renew.

A less sophisticated option are the 20-inch alloys. Every time I see the car from the outside I think the £595 Night Package that they’re part of was money well spent. But inside I curse the harsher ride which results from having gossamer-thin 30-profile tyres. It’s bearable on slightly rippled roads, but even the smallest pothole sends a crash through the cabin.

With all the technology it’s easy to overlook old-fashioned things like the engine. The 2.0-litre diesel is a technical tour-de-force, with strong performance which almost matches the sporty AMG Line bodykit. The figures claim it should be returning 61.4mpg, but of course it’s not getting anywhere close. In mixed driving we are only just breaking 40mpg, despite using the ‘Eco’ setting for most journeys.

While we’re talking of filling up, an estate owner is always going to want to know about the boot. It’s big, of course, at 640 litres, and with the holiday season approaching, the E220 is set to be packed to the roof and pointed across the Channel for some European adventures.