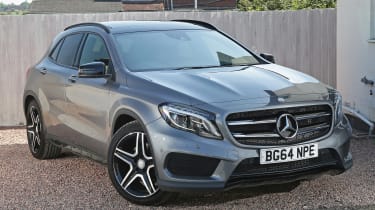 It’s easy to see why the GLA has been such a success for Mercedes, because it has loads of showroom appeal. Most models have plenty of performance, a lot of standard equipment, and can cover long distances with ease, but the GLA has shortcomings, so you need to make sure that this is the right car for your needs. It’s not as practical as it should be and it doesn’t have the elevated seating position of some rivals. Prices are steep and while it’s fine to drive, the handling is inert. Still, the GLA should impress your neighbours.

Mercedes is no stranger to the SUV sector; it introduced its legendary G-Wagen almost four decades ago, in 1979. While that car was distinctly utilitarian, Mercedes has since introduced more road-biased SUVs and one of the more recent is the GLA, which is, in effect, a jacked-up A-Class.

As a result the GLA shares most of that car’s characteristics such as the basic shape, interior packaging and cabin design. There’s plenty to like, but it all comes at the premium prices that Mercedes charges. That hasn’t stopped the GLA being a new-car hit though – so should you take the plunge? 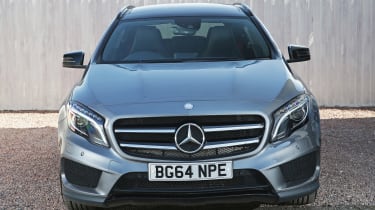 Diesel fans could choose between 136bhp GLA 200 CDI or 170bhp GLA 220 CDI editions, both featuring a 2.1-litre engine. The more powerful unit was also available with a 4Matic transmission.

While the GLA 200 and GLA 200 CDI had a six-speed manual gearbox as standard, a seven-speed dual-clutch transmission was fitted as standard to the GLA 250, GLA 220 CDI and any car with 4Matic.

All GLA engines have four cylinders; the diesel should be more refined than it is, but it still makes the most sense because it offers plenty of muscle with the potential for 55mpg economy in the real world. 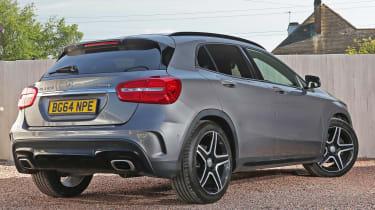 The manual gearbox is fine to use but the seven-speed automatic makes driving the GLA very relaxing, which is why it’s the transmission to go for; it’ll also make the car much easier to sell on. All GLAs are well equipped, but the options list is extensive, with lots of packs available, so establish the exact spec of any potential purchase. The key trim levels are SE, Sport and AMG Line; the GLA45 AMG gets its own equipment list.

Alternatives to the Mercedes GLA

While the original BMW X1 wasn’t a very convincing car, the second-generation model that arrived in 2015 is a cracking crossover with efficient engines, excellent build quality and an inviting driving experience. Like the GLA, it’s no bargain.

The Audi Q3 is also very accomplished and while its driving experience and cabin design are rather clinical, it’s an easy car to recommend with its strong, refined engines and decent reliability record. A Mazda CX-3 is a less obvious alternative that’s great to drive, has a very high-quality feel and excellent engines. While its practicality is compromised, it’s very good value.

The ageing Range Rover Evoque is worth a look, too, now that prices have dropped.

If you can hear an annoying rattle from what sounds like the boot, it’s probably the wiring connector under the folding rear seat.

On cars with keyless go, the battery in the key fob tends to get exhausted quickly. You can fit a new CR2025 battery on a DIY basis.

The boot latch can release the tailgate of its own accord. This is usually when the car has been left standing unused for a while.

There’s no provision for a spare wheel because  the Mercedes GLA has run-flat tyres. Replacements may not be readily available. 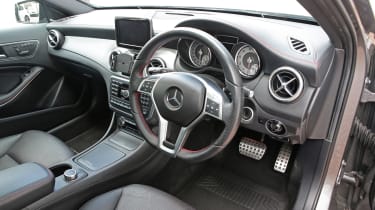 Fit and finish are good, but the busy dash takes familiarisation and the aftermarket-look of the multimedia system also polarises opinions. Seats are supportive and rear space is good, but a high window sill makes it feel cramped. Boot space is average at 481 litres, or 1,235 litres with the seats down.

All GLAs need to be serviced every 12 months or 15,500 miles. Rates vary, so it’s worth shopping around to save money; you can get quotes from any official dealer at www.mymercedesservice.co.uk. Services alternate between minor and major, priced at around £250 and £425 respectively for diesels, while petrol-engined cars are about £240 and £340.

The big service is the fourth one, priced at £700-£750. The brake fluid needs to be replaced every two years (at £80), while the coolant needs to be renewed once every 15 years. All GLA engines are chain-driven so there’s no need for any replacement cam belts.

There have been seven GLA recalls already, each also affecting other Mercedes models. The first was in January 2015, because some GLAs could suffer from oil leaks; the next was in August 2015 due to potential airbag failures. 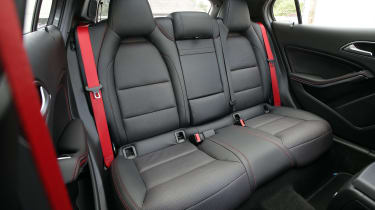 There were three campaigns in November 2015 for cars built between July and September that year because of possible engine failure. Fuel leaks were the reason for the sixth recall in January 2016. The last was in September 2016 due to possible dual-clutch transmission failure.

Although the GLA didn’t get into the 2017 Driver Power satisfaction survey, the third-generation A-Class did. It just finished 69th, beaten by the Audi Q3 (13th), Kia Sportage (12th) and Volvo XC60 (ninth). Owners rated the A-Class’s running costs and reliability, but not its engine, gearbox and safety kit.