The GLA comes with a choice of petrol, diesel and plug-in hybrid engines, while the Mercedes-AMG versions offer plenty of performance. 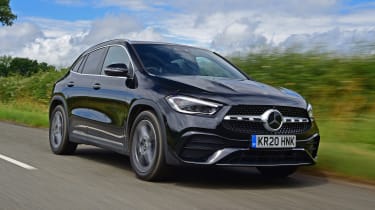 Mercedes has ensured that the GLA delivers premium levels of comfort and refinement. The SUV’s extra ride height and additional suspension travel,  compared to the A-class hatchback, means that it soaks up road imperfections easily and offers a comfortable drive.

The inevitable trade-off is that the GLA isn’t the most engaging steer, although if you fancy your compact SUV with a bit more shove, then there's always the Mercedes-AMG models to consider.

The GLA employs the second generation of Mercedes’ Modular Front-wheel-drive Architecture (MFA2 platform), which is also able to incorporate the manufacturer’s 4Matic four-wheel-drive system. This can send 50% of the engine’s power to the rear wheels for extra grip, if needed.

When we tested the GLA 220 d 4Matic we found it pulled strongly, with maximum torque achieved from just 1,600rpm. The eight-speed auto transmission works well and doesn’t hold onto revs too long before changing gear. There’s little engine drone and it all contributes to a quieter, more relaxed experience when pushing on than in the old GLA. 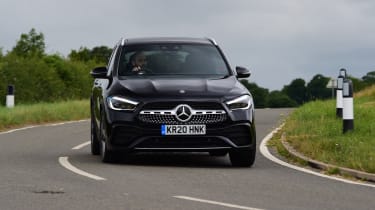 The GLA’s engine range is pretty straightforward with three petrol units, two diesels and a single petrol plug-in hybrid to choose from.

Both the entry-level GLA 180 and more expensive 200 versions use a 1.3-litre petrol engine, with 134bhp and 161bhp, respectively. The base car is able to deliver a 0-62mph dash of 9.6s and a maximum speed of 124mph, which is probably more than enough performance for most tastes.

However, moving up the range does add extra spice, with the GLA 200 trimming almost a full second off the 180’s sprint time, before motoring on to a 130mph top speed. The GLA 250 2.0-litre petrol variant is the quickest car in the range below the AMG variants. With a potent 221bhp, it’s capable of 0-62mph in 6.9s and tops-out at 149mph.

Diesel power comes in the form of the 2.0-litre GLA 200 d and 220 d models, which offer good pace as well as improvements in C02 emissions and fuel economy. The 148bhp 200 d is available with either front-wheel-drive, or 4Matic four-wheel-drive, with both completing 0-62mph in under nine seconds and offering a top speed approaching 130mph. The 187bhp GLA 220 d 4Matic is four-wheel-drive only, but is noticeably quicker, posting a sprint time of 7.3s.

If you’re after a mix of performance and superior economy, then Mercedes may have the answer in the shape of the GLA 250 e plug-in hybrid. It uses a 1.3-litre petrol unit, along with an electric motor to achieve 215bhp and a 7.1s 0-62mph time.