The chunky new Mercedes GLB is on sale now, starting from just over £34k and rising to almost £46k

Mercedes has announced that the new GLB SUV is now available to order in the UK, priced from £34,200 and rising to £45,950 for range-topping all-wheel-drive cars, with first deliveries expected this December.

Standard safety equipment for the new Mercedes GLB includes active braking assist, active lane keeping assist, speed limit assist, a driver attention sensor and keyless-go. Mercedes’s active bonnet system (which raises the panel on a series of springs, thus increasing the size of the crumple zone in the event of an accident) is also included. 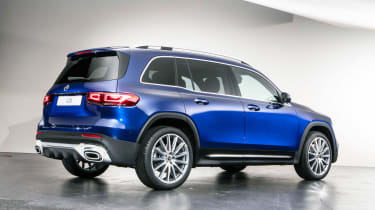 The range-topping Mercedes GLB AMG Line Premium Plus is priced from £41,700 and adds adaptive LED headlights, electrically adjustable memory seats, a panoramic sunroof and traffic sign assist. Mercedes’s Driving Assistance Package is also included, which can assume limited control of the car’s steering and speed on the motorway. 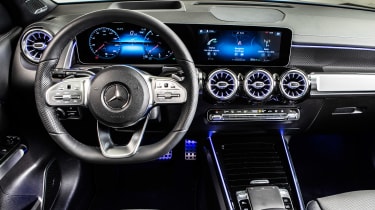 As standard, the GLB comes with seven seats, but Mercedes does provide a single, highly specced five-seat model for buyers who don’t require the third seating row. The five-seat GLB 220 d 4MATIC AMG Line Premium is priced from £42,200 and includes the same equipment as the seven-seat variant.

Mercedes offers the new GLB with a choice of three engines; one petrol and two diesels. The GLB 200 is powered by a 1.3-litre four-cylinder petrol engine, producing 161bhp and 250Nm of torque. It feeds its power to the front wheels via a seven-speed dual-clutch automatic gearbox, offering a 0–62mph time of 9.1 seconds and a top speed of 129mph. Mercedes claims 40.4mpg is possible.

The GLB 200 d is powered by a 2.0-litre four-cylinder diesel engine, which produces 148bhp and 320Nm of torque. It’s mated to an eight-speed dual-clutch automatic and is available with either front or all-wheel-drive. The former has a 0–62mph time of 9.0 seconds and a top speed of 127mph, while the latter offers respective figures of 125mph and 9.3 seconds. Fuel economy of up to 51.4mpg is claimed for this diesel variant.

Mercedes’s range-topping GLB 220 d 4MATIC is powered by a re-tuned version of the same 2.0-litre diesel engine, producing 187bhp and 400Nm of torque. It’s also mated to an eight-speed automatic and is exclusively available with four-wheel-drive, offering a 0–62mph time of 7.6 seconds and a top speed of 135mph, with fuel economy dipping to 49.6mpg.

Above these options, AMG tuned versions - a 302bhp GLB 35 and a 415bhp GLB 45 S - are expected to arrive in due course, but remain unconfirmed.

The GLB is positioned between Mercedes’s the GLA crossover and larger GLC SUV. It sits on the same MFA2 chassis architecture as the current A-Class, B-Class and CLA saloon, but the wheelbase is 10cm longer to give it extra practicality. The result is a car which, at 4.63 metres, is only 22mm shorter than a GLC.

Mercedes’s quest for practicality has delivered an unusually boxy profile. If anything, the GLB is closer in appearance to Mercedes’s flagship SUV, the GLS, than it is to the GLA. The firm has been clever with its use of bumper plastics to disguise the GLB’s sizeable flanks and show off its height; it is, in fact, slightly taller than a GLC. 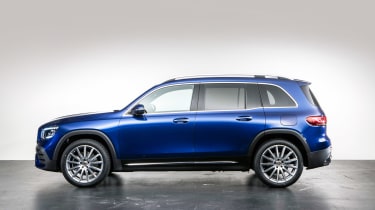 The GLB was designed from the outset to carry seven people. It can have up to four Isofix points for child seats – one on each of the outer chairs in the middle row, and two more in the pop-up sixth and seventh seats. Mercedes has also built smartphone-storage areas into the boot wall which incorporate USB-C charging points.

The five-seat GLB has a standard load bay capacity of 560 litres, but if the third row is being used on a seven-seat edition, the area beyond it offers only 130 litres. Even so, that five-seat figure is 65 litres up on a BMW X1’s volume. The maximum load space in a five-seat model is 1,755 litres.

GLB product manager Jürgen Leiter says the car could be the “missing link” in the firm’s line-up. “When we did the first range of MFA cars, starting with the A-Class, there was determination to make everything sporty, and the GLA was a reflection of that,” he tells us as we walk around the vehicle in a studio near Stuttgart.

“Now with the second generation of MFA, we know there are some people who wanted an SUV with practicality but not positioned as high as the GLC.”

What are your thoughts on the new Mercedes GLB? Let us know in the comments section below… 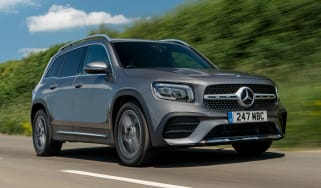 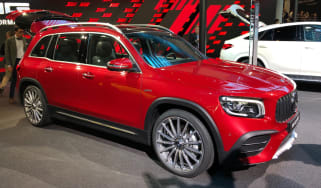