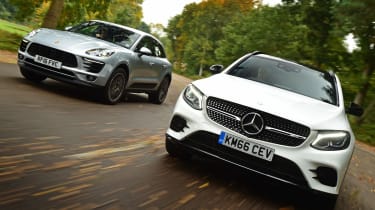 Mercedes has been slow to plug the compact SUV hole in its UK range, but now that the GLC has arrived, it’s not wasting any time with a performance version.

This AMG-enhanced GLC 43 is a perfect rival to the undisputed hot SUV king, the Porsche Macan, so if the newcomer wants to translate its impressive on-paper potential into road test victory, this is the car it will have to beat. Porsche put the Sport into Sports Utility Vehicle when it launched the Macan in 2014; never before had a near-2,000kg 4x4 been able to trouble a sports car for handling. But the GLC promises a mix of dynamic ability, practicality and design, so can it take class honours? 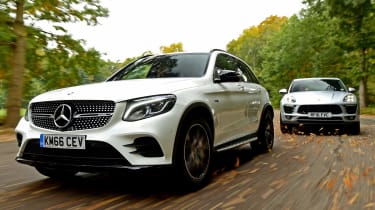 Next to the Macan’s more coupé-like styling, the Mercedes GLC is more like a conventional SUV thanks to its upright design. Of course, there’s a separate GLC Coupé on offer, too, but this £48,470 GLC 43 is more a match for the £46,650 Porsche.

The Mercedes-AMG body add-ons – including the deep front and rear bumpers, sports exhaust and 19-inch black wheels – enhance the look. The shape might be more practical than the Porsche’s, but these extras certainly pump things up, while dark windows and gloss-black window trim provide a hint of subtle menace.

And it’s justified, given the way the GLC drives. It’s eye-wideningly fast for a 4x4, and sprinted from 0-60mph in 5.1 seconds during our test at the track. Sport+ mode gives a lovely crackle from the exhaust on gearchanges, punctuating the engine’s musical wail. But in this most aggressive setting, the gearbox’s upshifts feel a little jerky. 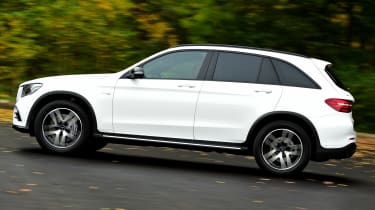 It’s also too firm for the road, but it’s easy to rectify both flaws by switching back to the Comfort setting. The ride is softer (although more severe bumps do still send a thumping shockwave through the chassis, despite the tall tyres) and the transmission is smoother. It changes up quickly to maximise efficiency, but because of the GLC’s portly 1,845kg kerbweight, even if you ask for a gentle burst of acceleration, it will kick down two or three gears. It makes for slightly disjointed progress where the Macan is keener to hold a gear.

Performance and driving dynamics aren’t the be-all and end-all of an SUV like this, though. Elsewhere, the Mercedes excels. The cabin is spacious and nicely crafted. As the GLC is the off-road version of the C-Class, the interior design is identical to Mercedes’ compact exec saloon, mimicking the S-Class flagship with its circular air vents and sloping centre console. 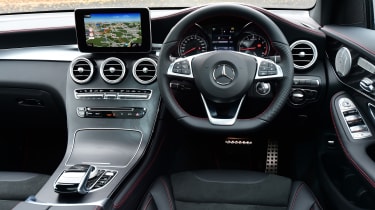 Material quality is good on the whole, too. AMG versions also only get man-made Artico leather as standard, while real leather is a £795 option. But this is the only real gripe with the equipment spec, because air suspension, heated seats, keyless go, climate control, sat-nav, DAB and Bluetooth all come fitted as standard.

We’ve got more concerns about the less material aspects of the GLC, though. Compared with high-performance versions of the C-Class and E-Class, this car doesn’t feel as special. There are some nice touches to differentiate it from lesser diesel models, but as it’s an SUV, not a ‘full-fat’ AMG, it doesn’t quite give off the same messages, nor does it feel as nicely crafted as the cheaper Porsche.

Porsche took much of the styling inspiration for the Macan from the rest of its sports car range. While the SUV is loosely based on the outgoing Audi Q5 underneath, it looks much sportier than its German rival. The low nose, chunky body and flowing coupé roofline conjure up a more sporting impression than the Mercedes straight away – and the same is true inside.

The raised dash and window line give a cocooned feeling, but you still sit high up from the road so the view ahead is as good as the GLC’s. As with all Porsches, the rev counter takes pride of place as the largest dial, and mounted in the centre of the instrument cluster, it highlights the focus on driver involvement, even though this is an SUV. 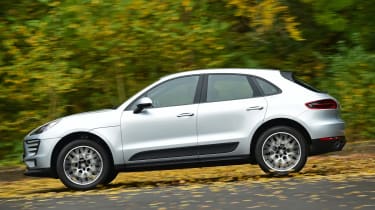 From the moment you climb inside the Macan, it feels that bit richer and more tactile than the GLC. More surfaces are covered in leather and the contrast in materials compared with the Mercedes – including the most prominent interior plastics – is noticeable. Full-leather seats aren’t standard, though; they’re a steep £2,162 upgrade. Sat-nav is a £1,052 option, too, which seems miserly on a car costing this much. However, Porsche’s seven-inch Communication Management system comes as standard, as does DAB, all-round parking sensors, Bluetooth and three-zone climate control.

By specifying the extras you’ll want, the price is brought roughly into line with the more expensive GLC. Yet the Macan is down on power because its 3.0-litre V6 produces 335bhp, plus it’s not as vocal. 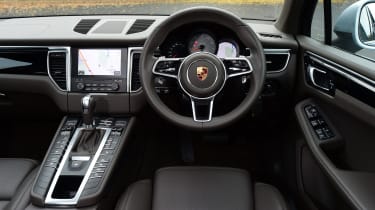 Still, with the standard seven-speed dual-clutch gearbox’s launch control, the less powerful, heavier 1,865kg Porsche was only four tenths of a second slower than the GLC from 0-60mph, taking 5.5 seconds. It was slower through the gears as well, as it has seven ratios to the Mercedes’ nine; it accelerated between 50 and 70mph in seventh in seven seconds flat, while the GLC took 6.4 seconds. However, given the Mercedes has two extra gears but identical revs at 70mph, the difference isn’t as big as you might expect, showing the Macan still offers impressive performance.

It’s more than fast enough, as the Porsche’s chassis is composed through corners, so you can better use what the engine has to offer. It steers sweetly and with impressive precision for an SUV.

On top of this, it feels every inch the luxury off-roader when cruising. It’s helped by the smoother, faster gearbox and greater refinement, which means the Macan covers its window of operation as well as the Mercedes. There’s even an off-road mode for light work away from the tarmac. 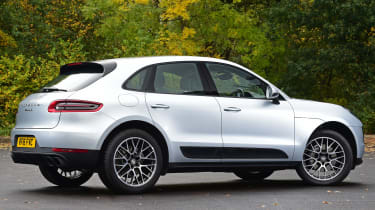 The Macan isn’t quite as practical as the GLC, but on the road, it’s just as fast and more fun to drive. Spec the adaptive dampers and the Porsche will offer plenty of comfort, while it’ll be cheaper to buy, too – a bonus, given the car has a higher-quality feel and offers a more exclusive, upmarket image. 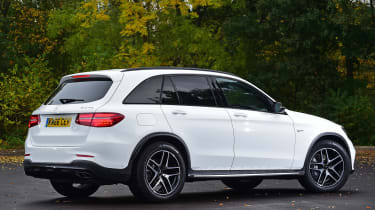 The GLC 43 is a great hot 4x4, offering the exclusivity of an AMG with plenty of practicality. But while it’s lightning quick in a straight line, the SUV underpinnings show in corners where the GLC can’t match the freakishly good Porsche. It’s a shame it doesn’t feel that little bit more special, too.