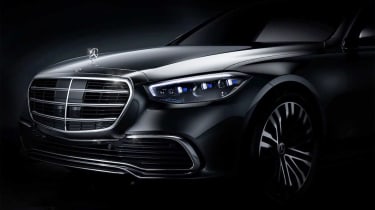 This teaser shot is our first official look at the all-new Mercedes S-Class. The German manufacturer has also confirmed that it will be revealed in the second half of 2020.

So far as teasers go, it’s a fairly revealing one, detailing the all-new nose, grille and headlights coming on the brand’s revitalised limousine.

This first official image comes in the wake of numerous spy shots and leaks. Most recently, the newcomer was leaked on social media, detailing many aspects of the refreshed exterior design but revealing the new-look cabin almost in its entirety.

Based on these new images, the car’s look from the outside will be more an evolutionary step using some design cues already established on some of the brand’s more recent models. The overall profile of the saloon, its size and shape won’t change too much, while the front end is altered with what looks like a more flat-faced nose and smaller headlights flanking a new look grille.

Leaked images revealed that the cabin will undergo a complete overhaul with an entirely new cockpit. The design changes with the introduction of a large, flat, two-tiered dashboard with two flat panes spanning the car’s width. Four square vents reminiscent of the climate vents on the GLS SUV sit at the top and in the centre, while the lower pane gets new vertical vents positioned in each corner.

A huge, Tesla-like portrait infotainment display sweeps up from the centre console, a new digital instrument panel sits behind the steering wheel - taken from the facelifted E-Class. There’s also a large well behind the instrument display, suggesting that the new S-Class will feature a highly detailed and advanced head-up display system as yet unseen anywhere else in the Mercedes line-up.

As ever, the S-Class will be the firm's technological flagship; an array of new driver convenience tech, as well as Mercedes’s latest range of electrified drivetrains and infotainment systems will appear. Recent spy shots have also confirmed new pop-out door handles.

It’s likely that the S-Class’ powertrain line-up will comprise entirely of electrified options, comprising a mix of updated six-cylinder diesel and petrol options - some with 48-volt or plug-in hybrid assistance. Higher-powered V8 and V12 engines are also possible.

An all-electric stablemate is in the offing and will be produced from the end of next year. The EQS, like other Mercedes EQ models, will be an all-electric interpretation of the combustion powered car with some similarities in design but purposefully marketed as a flagship model for the EQ electric car line-up, and capable of up to 310 miles on a single charge.

New Mercedes-Maybach S-Class luxury limo spotted at the Nurburgring ahead of launch in 2021
New BMW 4 Series: full details, specs and pictures of the 2020 car