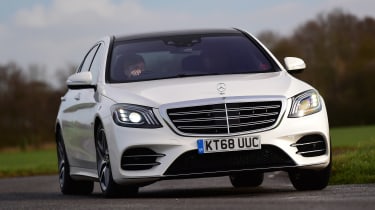 The Mercedes S-Class is still the most convincing luxury car you can buy, and the S 560 e L will be the best version for many prospective buyers. Elsewhere, the S-Class retains its class-leading edge as an elegant and perfectly crafted limousine. It doesn’t matter if you’re sitting behind the wheel, in the passenger seat, or in the rear, little else is quite as impressive for the money.

The Mercedes S-Class line-up is a surprisingly diverse one for a car designed with one particular task in mind: to be the best sub-Bentley luxury limo that money can buy.

Electrification has been a part of the line-up before, but this new entry into the S-Class range is an altogether more serious attempt at an electrified version of the brand’s flagship. Badged S 560 e L and falling under the new ‘EQ Power’ family of Mercedes plug-ins, it uses the 3.0-litre turbocharged six-cylinder engine from the S 450, combined with a powerful electric motor. Total system output stands at 469bhp, while a 13.5kWh battery enables the hybrid S-Class to run on electric power for a claimed 25 miles and at speeds of up to 80mph.

In practice this plug-in set-up feels immediately at home in the S-Class. A stab on the throttle reveals it’s not short on performance – yet more importantly it’s superbly serene. 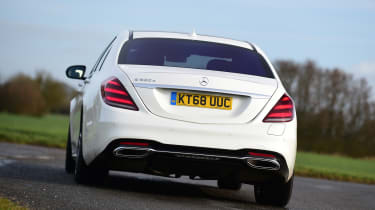 In town it feels somewhat strange to be behind the wheel of something so large and opulent, but ultimately, capable of smooth and silent pure electric running. When speeds begin to increase it transitions from electric to petrol power seamlessly, while heading up to a motorway cruise reveals the kind of at-speed refinement you’d expect of a long-wheelbase S-Class. Combined with the model’s trademark all-round ride quality there really isn’t a scenario where the S 560 e L feels like a fish out of water.

The only things that stick out are the slightly long brake pedal and that feeling of an extra bit of weight brought about by the bulky battery pack. For the driver, these really are two very minor shortfalls. For those lucky enough to spend more time in the back than behind the wheel it makes no negative difference at all. Be in no doubt that this is the S-Class to be chauffeured in, given the impressively silent running at lower speeds.

On the road, then, the S 560 e L ticks all the correct boxes. But that’s not all that surprising. The S-Class has held on to its place as our favourite luxury car for some years now, with the new Audi A8 the latest challenger to not quite topple the big Merc.

What could make-or-break the S 560 e L is what it’ll be like as an ownership proposition. By and large we see few issues, but there are two very minor things to point out. First of all, the 13.5kWh battery pack recharges at a maximum rate of 7.2kW. That means a 1.5-hour recharge of the battery is as quick as things get through a roadside or dedicated wallbox charger. Off a three-pin plug it’ll take five hours to top up the battery, though that shouldn’t be a problem if the car is connected overnight.

While the battery itself is smaller in size than the lower-density cell fitted to the older S 500 e, it still eats into bootspace. The S 560 e L serves up 395 litres of room, compared to the 510-litre norm you’ll find on many other S-Class models. To put that into perspective, this is a huge car but with a boot on par with that of the latest Kia Ceed hatchback.

Ultimately, if you’re going to rack up big motorway miles, the S 350 d is still the pick of the range. It’ll be cheaper to buy and on the highway the diesel will be more frugal than the petrol motor the S 560 e L has to fall back on. At this kind of speed there’s little to split the two in terms of refinement, either.

However, if you spend most of your time driving – or indeed being chauffeured – around town, then the S 560 e L is our choice. Here, the pure-electric aspect makes total sense and, in London, leaves this S-Class Congestion Charge exempt. For business buyers this is a tempting proposition too, given the enticing 16 per cent Benefit-in-Kind rate. It should offer up decent tax savings over the 36 per cent earmarked S 350 d.

At the moment rivals are few and far between, but coming. The new BMW 745Le, which also uses a six-cylinder plug-in hybrid setup, could be a tempting proposition given it starts £14,000 cheaper than the Merc. We’ve driven it briefly and have been left impressed. However, it doesn’t quite field as much electric range owing to its smaller battery. Audi will join the action shortly with a plug-in version of the A8 due later this year.