The new MG HS SUV hits the UK as a cheaper alternative to the Nissan Qashqai, Peugeot 3008 and Skoda Karoq 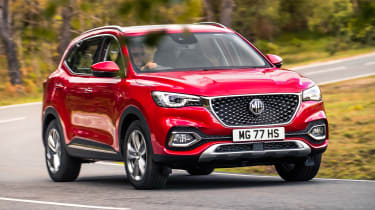 With each new MG model, the brand takes a little step closer to the established makers. The HS delivers passenger space, a seven-year warranty and a purchase price to set it apart from most rivals, while the interior design and quality are a big improvement over previous MGs, too. However, there’s still plenty of work to do from a driving point of view: in terms of ride, handling, and particularly engine refinement, it’s a long way off the class best.

This is the new MG HS: the latest SUV from the rejuvenated MG brand. Competitive prices and a huge seven-year warranty have seen the latest models gain popularity, with the electric ZS EV in particular showing huge promise: MG took roughly 2,000 orders in the first month.

But moving into larger vehicles can be more challenging. Buyers demand something that looks and feels posher – and with such a huge amount of choice in the mid-size SUV class, the HS has a lot to prove. So does this new MG have what it takes to become a credible rival for the Nissan Qashqai or the Skoda Karoq?

To start with, MG is keeping the HS range simple. There are three trim levels and one engine – a turbocharged 1.5-litre petrol – offered with a choice of six-speed manual and seven-speed dual clutch automatic gearboxes. 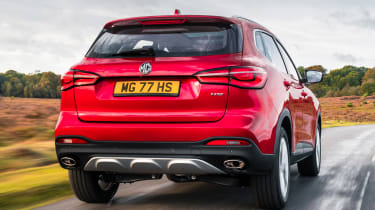 The styling is pretty simple, too. The front bears the family MG look, but applied to a broader, squarer shape. It’s not particularly distinctive, but Peugeot 3008 aside, not much in this segment is.

Against the tape measure, it falls between the Qashqai and Karoq for length, while it’s within a couple of milimetres of the Skoda for both width and height. MG reckons that cabin space is class-leading, and we’d have to agree. Legroom is generous, headroom is more than adequate and, while we didn’t sit three people across the back bench, the numbers suggest it’ll be one of the best in this area, too. At 450 litres, the boot is larger than the Qashqai, but smaller than the Skoda.

Up front, MG has listened to criticisms about cheap-feeling materials in its other models. The result is really quite pleasing: squidgy plastics and leather-effect trims cover most surfaces, and any hard plastics that remain tend to be either out of sight or out of reach. Overall, it’s smart and minimalist inside. 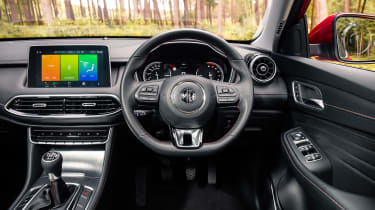 Perhaps too minimalist in some areas. The few physical switches you’ll find – like the toggle-like switches below the centre vents – look great, but there aren’t many of them. Pretty much all of the heating and ventilation functions must be adjusted through the touchscreen.

The 10.1-inch infotainment unit’s home page has three large shortcut tiles for audio, nav, and climate menus, each displayed with bright, colourful graphics. However, dive into the menus and some functions can be just a little fiddly compared to the best systems in rival offerings.

So far, so good, but out on the road things start to come unstuck. The MG HS’s chassis can’t match the mix of comfort and handling that you get from, say, a Karoq. Across broken tarmac and over small bumps, the suspension feels firm and fidgety, which you’d expect might give a degree of body control at higher speeds, but that isn’t the case. Longer, larger undulations cause the body to bounce and wallow. The steering is quite vague off centre, but has decent weighting.

The biggest letdown, however, is the engine. On paper, the 1.5 turbo’s 160bhp and 250Nm of torque look impressive. However, it doesn't feel that fast on the road, and Nissan’s 1.3-litre Qashqai and the Karoq’s 1.5 TSI are both roughly a second quicker to 62mph, despite claimed outputs of 138bhp and 148bhp respectively.

While the performance will still be adequate enough for most, unfortunately the refinement isn’t. The HS is noisy even under gentle acceleration, and around 4,000rpm it becomes genuinely unpleasant. You can still hear it at motorway speeds – this despite the fact that wind and suspension noise are fairly intrusive, too.

Based on an indicated fuel economy in the mid thirties, the HS is thirstier than rivals, despite giving away some performance. CO2 emissions of 148g/km for manual cars, means at least 24g/km more than the equivalent Qashqai or Karoq. 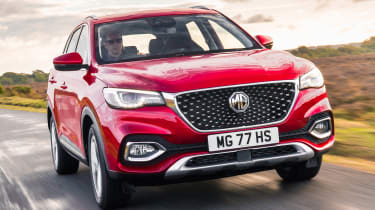 That manual gearbox is fairly slick. The auto, meanwhile, takes some of the edge off the engine’s harshness, but it’s very slow to kick down, and low-speed manoeuvering can be jerky. You do get a red button which hangs below the steering wheel spoke though (just like the starter on an Audi R8 - but in a family SUV) which engages a “Super Sport” mode; sharpening the throttle response and making the interior ambient lighting glow red.

Not the most necessary feature that the HS offers, but then there are loads to choose from. The lead-in Explore trim gets standard active emergency braking with pedestrian detection, cruise control with lane keep assist, 17-inch alloy wheels, leather-effect upholstery, air con and that 10.1-inch touchscreen (less the built-in navigation, but Apple CarPlay and Android Auto are included) for just £17,995. A similarly-equipped Qashqai costs a couple of grand more.

It’s cheap enough, in fact, that MG reckons most people will skip the middling Excite trim and head straight for the top spec Exclusive. It adds leather upholstery, LED headlights, a rear parking camera and a panoramic sunroof, yet still only costs £22,995 for the manual (or £24,495 for the auto).

The question is, whether there are enough SUV customers out there that think the HS is cheap enough to forgive some pretty obvious flaws.