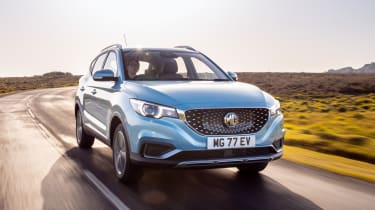 The MG ZS EV isn’t about to set new benchmarks on dynamics. But as an overall proposition, with that aggressive pricing, the practicality and low running costs factored in, it is by far the best effort yet from the ‘reborn’ MG brand. And one that deserves to find its place as a real alternative to the likes of the Renault Zoe and Nissan Leaf - particularly amongst electric car customers, second-car families and company car choosers, who tend to be more focused on ease of use and battery ranges than they are the badge on the nose.

The MG ZS has garnered a reputation for being one of the more practical small SUVs on the market - a vehicle that sits between the likes of the Nissan Juke and Qashqai on size, while competing hard on price. Now, though, the range is being bolstered by the ZS EV - a pure-electric version that has the potential to radically shift MG’s brand perception with British buyers.

In fact, if the stories about pent-up demand for small EVs are indeed true, the ZS EV surely has the potential to become MG’s best-selling vehicle in the UK. That’s because the British division has access to decent supply of the vehicle, which is made in China, where MG and sister firm Roewe shifted 140,000 EVs in 2018 alone, and a recently opened battery factory can supply up to 300,000 vehicles per year. When the likes of the Hyundai Kona Electric and even the Kia e-Niro are stifled by long waiting lists, there’s a clear opportunity for MG to steal more than a few customers.

The ZS EV can’t compete with those Korean models on range but then, it’s undercutting them both on price anyway (and then some - more of that later). The battery capacity is 44.5kWh - enough, under the tougher WLTP test regime, for an official range of 163 miles - some way short of the e-Niro’s 282 miles, but pretty much on a par with the likes of the current 40kWh Nissan Leaf (168 miles). The WLTP city range, incidentally, is 231 miles - a sign of how much more sympathetic urban driving is to battery life.

That battery powers a single electric motor, producing 141bhp and 353Nm of torque - enough to take the ZS from 0-62mph in a relatively sprightly 8.5 seconds. The top speed is just 87mph - but then, that should still be enough to keep pace with (legal) motorway traffic. 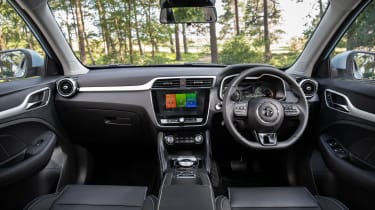 The ZS EV is compatible with 50kW rapid charging, allowing four fifths of the battery capacity to be replenished in 40 minutes. The charging port - a CCS/Type 2 affair - is located behind the MG badge on the front grille.

It’s a practical thing, the ZS; the EV powertrain doesn’t rob the car of any of its boot capacity, so there are 448 litres on offer with the rear seats in place, and 1,375 litres with them folded down. Those figures are roughly a match for the Kia e-Niro’s, and north of what you’ll find in a 40kWh Leaf. The boot is a decent shape, with a dual-height floor that allows you to prioritise either a flat load bay or overall capacity.

The cabin is perhaps where the ZS’s budget roots are exposed most clearly - not with any horrendous faults, but just minor niggles. The steering wheel adjust for rake only, not reach; the plastics lining the door are rock-hard and shiny. And that infotainment screen, while crisp enough, is mounted in a curious fashion, behind a secondary glass panel that breeds reflections. You sit a little high, too, so while the battery pack is neatly integrated into the MG’s floor, this does feel like an SUV that you sit on, rather than in.

None of these is a deal-breaker, though; it’s still easy to get comfortable, everything works logically enough, and any rear-seat passengers will be happy that you’re in a ZS instead of, say, a Zoe or even the forthcoming Corsa-e. In this respect, the ZS’s class-straddling size works in its favour.

On the road, the ZS EV does a very good job of being unremarkable - which is a compliment in itself. The rotary gear selector between the front seats is a doddle to use, and it’s equally easy to flick between the different driving modes to prioritise performance or efficiency. Acceleration is sufficient around town, with the electric motor’s instant torque helping the ZS EV to feel more than fast enough away from traffic lights. 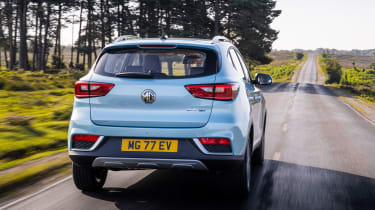 MG’s test route was based entirely in central London, though, so we’ll have to wait to see how the motor behaves when it’s on a motorway and much closer to that fairly modest top speed.

A toggle switch near the base of the centre console allows you to choose the level of brake energy recuperation when you lift off the throttle - from none at all (coasting, in effect) to three different stages of aggression. MG claims the system offers “near one-pedal driving” in its most extreme mode, but it still feels like it could be quicker to start harnessing energy when the throttle pedal is disengaged. You get used to it, though, and while it won’t bring you to a halt at traffic lights, we could certainly see how you’d learn to anticipate to the point where you only need a final nudge of the left-hand pedal to stop.

Dynamically, the ZS is pretty average - but again, that’s enough to put it on a footing with many more expensive EVs. The electric motor whine is well suppressed, and while the steering is light and devoid of feel, it’s no more difficult to place the front wheels than it is in a Leaf.

The suspension set-up is geared up for comfort, and it delivers that by isolating you from most bumps and potholes, although the trade-off is body control that felt a little patchy on scarred side streets, with more pitch and roll than we’d like. We’d be interested to see whether this shortage of composure was exacerbated on a faster, twisty B-road.

If the drive sounds relatively ordinary, the price proposition is anything but. The regular price of the ZS EV in Excite trim will be £28,495 - but you can trim the £3,500 Government plug-in car grant from this figure, for starters. Those headline figures look competitive when the likes of the Vauxhall Corsa-e and Peugeot e-208 offer less space (though more range) for around the same cash.

It’s worth remembering, too, that the ZS will come with MG’s transferrable seven-year warranty. And the recently announced company car tax switch could make the ZS EV a particularly appealing (and cost-effective) choice for anyone currently driving a diesel family SUV.