The university city’s car factory builds around 260,000 MINIs a year. We went to collect our new model – and see how the Clubman goes from raw bodyshell to road-ready. 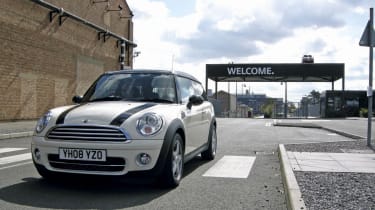 The smell, the gloss, the quality... there’s nothing quite like climbing into a brand new car. But while it might feel like a model that is only minutes old, it’s already undergone a huge production process. When we collected our MINI Clubman, we had a look behind the scenes to see just what went into getting a Clubman from concept to reality.

Few cars could be more British than the MINI, so it’s fitting BMW kept production on these shores. Every hatchback, Convertible and now Clubman has rolled off the line at the same Oxford factory. And it’s here that we came to collect our Pepper White Cooper D. BMW has invested £380million in its British plant, and with more than 260,000 models a year coming out of the factory doors, MINI is now the UK’s third largest car producer.

So, having taken a quick look at our new model, I slipped on a protective coat and headed into the plant to see how this British institution is put together.

We started in the ‘body in white’ section, so called as untreated steel is called white steel. Here, bare panels arrive from BMW’s pressing plant in Swindon, Wilts, and more than 500 computerised robots weld the bodyshells together. The Clubman’s roof is the biggest one-piece pressing anywhere in the BMW group!

We were surprised to see that for the majority of its production the estate model runs down the same line as hatchbacks, and only when the unique roof panels are constructed does it divert to a different area of the factory.

After 10 hours passing through the paint shop, the cars enter final assembly. With two million variations of MINI available, the computerised production system ensures the right bits arrive on the right car. It’s almost like running a supermarket!

Each car has a barcode and transponder that talks to the automated tools and robots. The smooth running of the process is essential, as MINI claims no two models built in any one year are the same, such is the complexity of personalisation available.

Seeing the production line in action is truly fascinating, but what was the highlight of the day? Without doubt, it was leaving the factory behind with 12 months of Clubman motoring ahead of us!