We drive one of the most intimidating competition cars, the Dakar-spec MINI ALL4 Racing. Watch the video!

One of the world’s most intimidating competition cars. Ever. It weighs two and half tonnes with all the paraphernalia on board required to complete a stage of the Dakar rally, and it has 800Nm of torque. And it is every bit as mental to drive as it is to look at – and that’s intended purely as a compliment.

It looks quite a lot like a tank. But it drives, well, just like a Dakar Rally racing car. Welcome to the MINI ALL4 Racing, yours for a cool three quarters of a million pounds and boasting everything from kevlar carbon bodywork to water cooled dampers and brakes, a sequential six-speed gearbox plus a 3.0-litre straight six twin turbo-diesel engine that develops enough torque to knock a Scandanavian forest down.

Developed by MINI’s rally division X RAID specifically to win the Dakar (which it did every year from 2012 to 2015) the ALL4 Racing is one of the most physically imposing rally cars you will ever set eyes upon. It stands around eight feet tall and makes a BMW X5 look like a VW Polo. 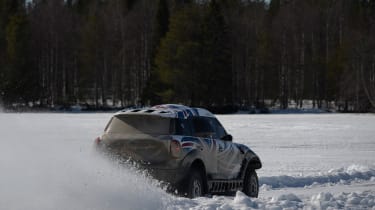 It’s also one of the heaviest competition cars in the world, with a kerb weight of 1,953kg before either of its two intrepid occupants have climbed into its cabin. Add the three spare tyres and tools and a full tank of diesel that’s required to complete any one of the gruelling Dakar’s Special Stages and the starting weight of the ALL4 rises to around 2.5 tonnes.

• Our first ride in the MINI ALL4 Racing

Inevitably the cabin of the ALL4 is festooned with buttons and switches and dials that seem entirely alien to anyone who doesn’t know the car intimately. Including yours truly.

Sitting up high behind the wheel, though, listening to the straight six turbo-diesel rumble away menacingly beneath the bonnet, side exit exhausts whistling with turbo chatter, the machinations of the sequential gearbox adding considerably to the cacophony, even at idle, the MINI Dakar feels powerful, robust, and majorly intimidating. Blip the throttle and the whole car rocks on its high rider suspension. 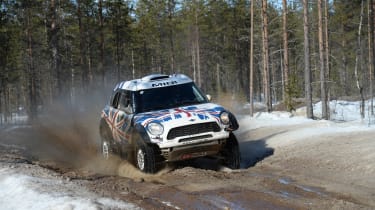 Contrary to your expectations, selecting first gear requires merely the gentlest of tugs on the big white gear lever, and the clutch is also surprisingly light and non-trigger happy, too. Getting the ALL4 to move is, by heavy duty competition car standards, relatively easy.

And as it starts to move I almost immediately select second gear, again with a calm but firm pull on the lever, no clutch being required up or down. At which point I realise that the power steering is also curiously light and easy to operate, albeit instantly direct in its response. 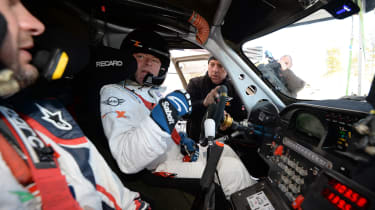 After a minute of rumbling along a deserted but still public road in deepest Finland, feeling how smooth the ride is and how simple the ALL4 is to drive generally, I can’t help but think; who are these so-called warriors of the Dakar? This thing is an absolute pussycat to operate. Anyone could do it. Or maybe not…

A little further up the road I squeeze the accelerator to the floor, at which point the full fury of the ALL4’s 800Nm torque output kicks in. And it hits its rev limiter in third pretty much instantly. Up into fourth, then fifth and, whoa, now it’s starting to slide around a bit. And there’s a corner up there that’s now right here, so I hit the brake pedal hard and…as if by magic, and despite being on ice, the ALL4 sheds speed much like a decent hot hatch brakes on a bone dry piece of tarmac. It is a quite incredible thing to experience first time – how fast this two and a bit tonne monster stops. On ice. From nearly 100mph. 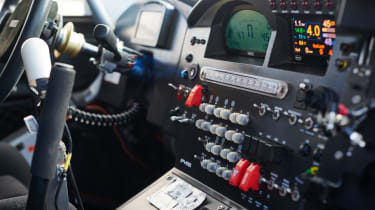 But not as incredible as what it feels like to drift and slide and generally throw about around a purpose made race track on an ice lake. Which is what I did next in the ALL4. Because this is a machine that has been built, remember, not to dance around beautifully on ice but, instead, to be driven for two weeks solidly across sand dues and dirt roads, and along dry river beds. At temperatures of over 50 degrees C. And at altitudes approaching 5,000m in parts of Chile and Bolivia.

But on the ice, the ALL4 feels just brilliant. A bit understeery if you lean on it too hard, too soon perhaps, yes, partly because of how much it weighs, and partly because it’s been designed to tackle very different terrain to this. It’s also been designed to go mostly in a straight line, in fact, often as fast as possible, come rocks or sand dunes or whatever else happens to get in its way in south America.

But as a PR exercise, allowing a small selection of idiots like me to drive a monster like this, at 80mph plus, completely sideways, across a frozen lake in Finland, well it takes some beating. 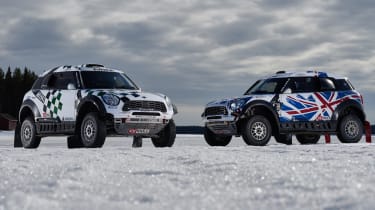 In terms of helping the X RAID MINI ALL4 team to win the next Dakar in 2017, this was all completely pointless, of course. But for proving a point about a simply astonishing piece of engineering, it was very hard to fault.

If only they’d let us have a bit more time in it… Then again, one of us would almost certainly have sent it into a tree at some stage. And then the ALL4 would no doubt have dusted itself down and started all over again.

Amazing car – but then you need nothing less if you want to win the world’s most amazing race.