This MINI has got the 'Works'. We try the fastest Cooper money can buy. 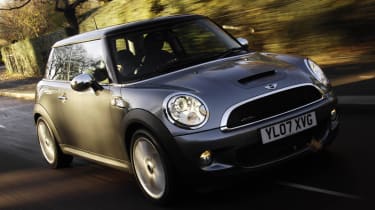 Every version of the MINI is good to drive – even the entry-level One. But this flagship Cooper S Works model is nothing short of brilliant. It’s very quick, sounds racy and doesn’t cost the earth. The tuning kit can be retro-fitted, so current Cooper S owners can benefit. It’s a hugely impressive all-rounder that manages to provide a blend of pace and comfort rivals struggle to match.

The 192bhp 1.6-litre engine has been modified using a series of parts which can be fitted at the factory or retrospectively added to the turbocharged Cooper S. In this Works guise, the latest uprated MINI adds £1,545 to the basic price of the Cooper S – that’s £1,095 for the kit, plus £450 to fit it. As a result, entry-level models weigh in at £17,550, and rival the likes of the Renaultsport Clio 197 R27 and Honda Civic Type R.

So, what do you get for your money? Well, the dealer-fit package comprises a special JCW-engraved sports exhaust, sports air filter and revised engine management system.

This raises power by 17bhp, and torque is increased from 240Nm to 250Nm, with 270Nm available on full-throttle overboost. The sprint time from 0-62mph is reduced by three-tenths-of-a-second, dropping it down to 6.8 seconds, and 4mph has been added to the maximum speed.

Clearly, this car is not about attracting attention, because the external changes are limited to subtle John Cooper Works badges on the grille and tailgate. However, if you’re keen to be seen, you can specify a Works bodykit with carbon fibre trim and 18-inch alloys, all at extra cost.

Otherwise, you could wait until next year, when the firm takes the wraps off its 210bhp John Cooper Works Edition. That will have uprated suspension and matching brakes, plus a head-turning bodykit that’s modelled on the Challenge race car.

Until then, this is as quick as the MINI gets – and it’s very rapid indeed. With maximum torque coming in at 1,750rpm and continuing all the way past 4,500rpm, the Works is always amazingly responsive. In damp condi­tions, that’s enough to get the front wheels troubling the traction control when pushing out of tight bends.

On dry surfaces, the car simply flies. There’s more urge for overtaking than in the base Cooper S, and it’s easy to keep the engine in the middle of the powerband, thanks to the well spaced ratios of the slick six-speed transmission. Factor in the extra rasp from the sports exhaust and some turbo whoosh, and you’ve got a lively, fast and exciting experience.

It’s frugal, too. Using the Efficient Dynamics system, the Works engine switches itself off when stationary in traffic, before restarting as soon as first gear is engaged. There’s also a clever alternator, which helps the car return the same fuel economy figures and emissions as the regular Cooper S, claims MINI. Thankfully, no change has been made to the suspension.

The wonderfully compliant and comfortable ride of the Cooper S is carried over, and its suppleness allows drivers to make the most of the extra perfor­mance, even on bumpy British roads.

The suspension manages to soak up the stiffness of the run-flat tyres. And with body roll kept in check – along with steering that’s direct and full of feedback – the Cooper S Works is fantastic on twisty routes, covering ground at an incredible rate.

Yet at the same time, its nature is grown-up and refined enough to be relaxing on a long motorway drive, or when you’re not going terribly fast. Build quality is brilliant, too. True, there’s not much room in the back and, with MINI’s extensive options list, it’s easy to inflate that tempting price. But the latest Cooper S Works is still a great small performance car that’s almost got it all!

Rival: Renault Clio 197 F1 With its high-revving 2.0-litre engine and bone-shaking ride, the special-edition Renaultsport offers an engaging hot hatch experience. The trouble is, while it’s fun, it’s also something of a one-trick pony. It can’t compete with the breadth of talent that the Works delivers.