Prepare for a shock! MINI has launched its first-ever electric car, and Auto Express has driven it. 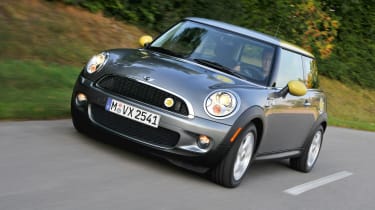 It’s fitting that MINI, which can trace its roots back to the invention of the small city car, is now at the forefront of the creation of a new class of vehicles that will be equally as significant in the future.What’s more, the MINI E is given even greater relevance by the quality of its engineering, and by its ease of operation. While the challenge of charging the vehicle quickly has yet to be overcome to make this model as versatile as its petrol engined rivals, there is no doubt that the promise is there. With this machine, MINI has proved beyond a doubt that for small cars at least, the future really is electric.

MINI is on a charge! The British-based firm has made history byproducing its first ever all-electric production model – and AutoExpress has driven it.

The unlikely star of the Los AngelesMotor Show, it points the way to the zero-emissions car of tomorrow.It’s being made available in the US to 450 customers, who will run theexperimental model for a year, at a monthly lease price of $850.

Mountedwhere the back seats would normally be are 5,088 AC Propulsionlithium-ion battery cells, similar to those in most mobile phones. Thatmeans this MINI weighs a hefty 1,465kg.

The system is similar,but not identical, to the set-up in the Lotus Elise-based Tesla sportscar. And the battery provides a maximum driving range of 150 miles, atop speed of 95mph and a 0-60mph time of eight seconds – making thenewcomer quicker than a standard MINI Cooper.

The 35kW/hbattery takes only two hours to power up using BMW’s 50-amp charger,which will be fitted to the house or workplace of all MINI E testdrivers at no extra charge. With an ordinary US 110V supply, thatcharging time stretches to a maximum of 28 hours – so you need to planfor longer trips.

The electric conversion effectively turns theMINI E into a two-seater, with an even smaller boot that can swallow acouple of briefcases. The dash gets a battery charge indicator and apower use meter in the speedo.

Starting takes about 10 seconds,as the electronics check the state of the battery and confirm thevehicle is working correctly. With 400 volts of direct current flyingaround, safety is paramount, and the bonnet is effectively sealed. Tryto open it and the battery is isolated; you’ll need a BMW engineer toreconnect it.

There’s the faintest hum as the fans cool thebattery pack behind you and the motor under the bonnet. When the dashlights confirm the car is ready, you simply put the gearlever in Driveand press the throttle.

The 201bhp motor responds immediately.The little MINI E takes off like a scalded cat, its tyres fighting the220Nm of torque, and the steering wheel twisting in your hands. There’sa high-pitched whining from the motor, but otherwise the car is eerilysilent and the main noise is that of the tyres on the road.

Liftoff the throttle and the effect is even more marked, but in reverse.BMW’s engineers have chosen to apply all the regenerative braking whenthe throttle is off, rather than when the left pedal is pressed. Thiscan be as much as 0.3g, which is harder than most in-town braking. Forthat reason, the tail-lights illuminate to warn following drivers thatyou are slowing quickly. It’s a weird sensation, and many owners willfind they hop down the road before they get used to the on-offaccelerator pedal.

The steering is heavy and, as it rides onmodified Cooper S suspension, the ride is harsh. But this is a big stepforward for BMW and MINI. In all, 500 cars have been built, and a trialwill take place in Germany next year.

The MINI E is unlikely tocome to Britain. But an insider says the firm is in talks with theGovernment with the aim of preparing the ground – as well as thecharging infrastructure – for this and other electric cars. So, watchthis space.

Rival: Fiat 500 Hybrid All-electric versionof the popular 500 isn’t far away. A 900cc two-cylinder petrol-electrichybrid is due next year, boasting 90mpg and CO2 emissions of less than100g/km.