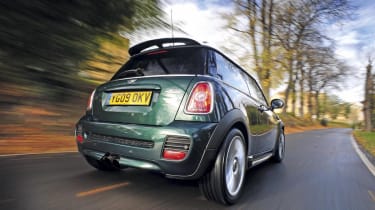 The leaves are turning a lovely shade of yellow, so it’s time to say hello to winter – and goodbye to our long-term MINI John Cooper Works. The British-built hot hatch joined the Auto Express fleet back in May, and our six months with it are nearly up.

Before it goes back to the manufacturer, I’m making sure I squeeze every last bit of enjoyment out of the car – although this is tinged with sadness when I climb behind the wheel. I can’t seem to stop thinking about how much I’ll miss it when it’s gone!

This is the second long-term hot hatch I’ve run over the past 18 months or so. And while the VW Golf GTI MkV I used to drive was enormously capable, the MINI is the more raucous car.

Lively handling and serious performance mean it’s incredibly entertaining to drive on all kinds of road.

The JCW really comes into its own on narrow and twisty routes, though – I can’t think of many models I’ve driven that are as quick from point to point as this.

Admittedly, traction is at a premium at times – not surprising given that the tuned 1.6-litre engine delivers all of its 211bhp through the front wheels. The JCW will tug from side-to-side under hard acceleration on heavily cambered roads as the stability control system works overtime, although this is a small price to pay for its engaging character.

I also love the racy details MINI has added to set the car apart from the regular Cooper S. The Sport button livens up the already sharp throttle response, and I’ve never tired of the burble you get from the exhaust on the overrun.

Plus, as I’ve said before, it’s a testament to the package that so much of the JCW is carried over to the incredible MINI Challenge race car I was lucky enough to drive in. On top of all this, I’m going to miss some of the key attributes that make any MINI so brilliant to own.

No competitor is as well engineered, while interior quality leaves everything else in the class trailing. The retro design inside still makes me smile when I climb aboard, too.

So YG09 OKV has become a close friend – and we’re going to spend some quality time together over the next week before we’re parted for good!

I can see why Owen loves the MINI so much, as it has a really fiesty personality. The JCW is incredibly fast on country roads, where its tiny dimensions, powerful engine and sharp handling come into their own. Around town, though, the firm suspension makes for uncomfortable progress, while long distances don’t appeal for the same reason. As with all MINIs, the tiny load area is a serious flaw, too. But as a fun machine, this flagship model really does take some beating.