The Cooper has unique charm, low running costs – and is a hoot to drive. 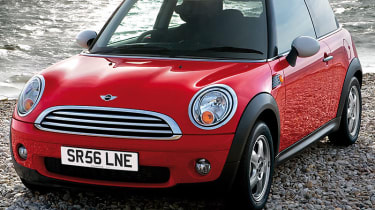 Driving When it comes to the driving experience, the latest MINI Cooper can teach even the old car a lesson or two. For starters, even though our test car was fitted with the optional sports suspension, the ride is pretty comfortable, and there’s a compliancy to the MINI set-up that its key rivals can’t match. Yet the Cooper displays just as much agility as composure. There’s a fraction of body movement, but the MINI changes direction beautifully, while the feel and accuracy of the steering is a real pleasure at any speed. What’s more, the brakes are strong, the clutch well weighted and the gearbox a joy to use. In fact, whatever type of driving you’re doing, the MINI excels, with refinement at motorway speeds being especially impressive. The engine contributes to this. It’s responsive low in the revs and doesn’t need to be spun that hard. It sprints to 60mph in just 8.6 seconds, and is both refined as well as frugal.

Marketplace This is the best-selling variant in the MINI line-up – and every panel is different from its MkI predecessor, even though you’ll have to look hard to spot them. The Cooper is set apart from the flagship Cooper S by its slatted chrome grille, single exhaust and tone-down lower bumper sections. Also, the detailing is more subdued; the surrounds or the indicator repeaters are make of black plastic instead of chrome, the tail light lenses are coloured rather than clear and you don’t get the Cooper S’s metal-effect fuel flap. It’s not the sportiest version in the line-up – the Cooper S takes the performance honours – so competes with warm hatch rivals such as the Vauxhall Corsa SRi, Ford Fiesta Zetec-S and Suzuki Swift Sport.

Owning The retro-inspired cabin that helped make the original MINI such a hit has been evolved here. The neat detailing, chrome trimming, trademark toggle switches and large central speedometer all look fantastic. The seating position is perfect and, unlike many rivals, the Cooper has reach and rake adjustment on the steering. We’d strongly advise you choose the optional Chili Pack – a feature that adds 16-inch alloys, a three-spoke steering wheel, sports seats, air conditioning, trip computer and mood lighting. Without it, the MINI doesn’t have enough standard equipment – and even with it, bargain-priced rivals give the Cooper a tough test. Passengers sitting in the rear seats will find they have less to please, too. And there’s not much space for luggage, ether; the 160-litre boot is downright cramped. On the plus side, the engine is very economical, while retained values are excellent. As ever, the tlc servicing pack is also a real winner.