If you had put your money on Mitsubishi's previous-generation Colt becoming a winner, you would have been backing a lost cause. As a supermini contender, it fell at the first fence, thanks to so-so handling, a rubbery gearshift and nondescript styling. 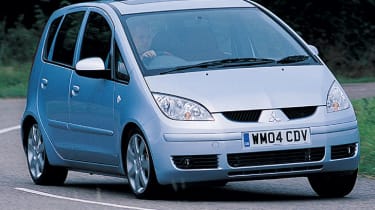 It's time to change your perceptions of Mitsubishi's supermini. The old Colt was poor to drive and lacking in style and innovation. But the new car is the total opposite. It's a well made and attractive small hatchback that can certainly compete with the best in its class.

If you had put your money on Mitsubishi's previous-generation Colt becoming a winner, you would have been backing a lost cause. As a supermini contender, it fell at the first fence, thanks to so-so handling, a rubbery gearshift and nondescript styling.

Mitsubishi hopes the new Colt will change all that, and Auto Express is the first magazine to get behind the wheel on British roads. The Japanese firm is aiming high with its new small car, taking on big hitters such as the Honda Jazz and Nissan Micra.

The Colt will be available with a choice of 1.1, 1.3 and 1.5-litre petrol engines, while a three-cylinder 1.5-litre diesel will join the line-up in October. Prices will start from £8,999 for the well equipped entry-level 1.1 Classic - which features alloys, a CD player and electric windows as standard - and rise to £11,499, which will get you the range-topping 1.5 Sport driven here.

The styling is certainly competitive. It isn't as adventurous as the Micra, but the Colt is a good match for the Jazz. Indeed, its profile resembles that of the Honda, while the two models also share a very similar headlight design.

Attractive Inside, the Mitsubishi is even more attractive. The facia is smart, especially the funky centre stack. It has its own CD storage area, a modern translucent blue finish around the minor controls and gearlever surround, plus an ashtray that looks as if it has been modelled on Star Wars robot R2-D2. Our only criticism concerns some of the plastics - notably the lid for the central cubbyhole, which feels cheap.

Aside from that, the Colt is a winner - and it comes close to the Jazz in terms of practicality. Room for passengers is generous, but its party piece is very much in the seating arrangement. The rear bench slides forwards on runners to increase boot space, while it also splits and folds into the rear footwells, creating an entirely flat load bay with its own protective lining.

That's all very well, but can the Mitsubishi match its rivals on the road? First impressions are promising, as you settle into the excellent driving position. Decent performance is on offer from our model's 1.5-litre engine, while the chassis demonstrates handling that's assured rather than rewarding.

The ride is firm, but not uncomfortable, while the steering feels accurate, if a little numb. Gearchanges are pleasant, too, yet the shift lacks the sweetness found on the Jazz, and the clutch pedal bites fairly high, which makes a smooth getaway an acquired skill.

Refinement is good, but the engine is buzzy and intrusive at speed. If you can live with that, then the baby Mitsubishi is an impressive package - one we think is well worth a flutter...