Someone must be smiling on me. As Auto Express's newest staff member, I had expected to be making lots of cups of tea. But instead, I've been given the privilege of looking after the latest car to arrive on our long-term fleet, a Lunar Silver Colt. 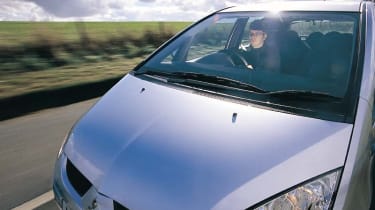 Someone must be smiling on me. As Auto Express's newest staff member, I had expected to be making lots of cups of tea. But instead, I've been given the privilege of looking after the latest car to arrive on our long-term fleet, a Lunar Silver Colt. Mitsubishi doesn't have a particularly strong record in this class, but now it has produced a convincing model which gives more established rivals something to think about. In Issue 818, we tested a 1.5-litre petrol Colt, pitching it against a Honda Jazz and Nissan Micra. Finishing second behind the Honda was a fine result. But when it came to running a car ourselves, we decided we wanted to limit costs as much as possible. So we opted for an oil-burning model - something Honda hasn't yet got round to putting in the Jazz. As with the petrol engine, the Colt's DI-D unit boasts a 1.5-litre displacement, but here it's split between three, rather than four cylinders. That certainly hasn't limited muscle, though, and there aren't many other diesel superminis at this price which can match its 94bhp performance. Around town, the Colt has already proved itself one of the nippiest cars on the fleet. It is relatively low geared for an oil-burner, and first and second ratios deliver a healthy punch which sees the rev needle zipping towards the red zone. And this is despite the fact that we're taking things easy for the first 1,000 miles while we run the Colt in. Keeping the engine speed down doesn't dent acceleration too badly. At only 1,800rpm there is a generous 210Nm of torque on tap, so the Mitsubishi never feels out of its depth, hauling itself along with vigour. Moreover, its response is good and, best of all, economy should be great. Official combined fuel figures promise 58.9mpg, but our car, which has thus far ventured beyond the M25 only a couple of times, has been returning 43mpg. We expect things to improve once the Colt is run-in and undertaking longer journeys. In fact, the only downside to the diesel is the intrusive clatter when starting up - thereafter, the three-cylinder thrum sounds characterful. It's not only the engine which has got me excited. The Mitsubishi's interior design is refreshing - I like the glow-in-the-dark switchgear and youthful ambience, even if the trim is a bit dark. There is plenty of storage, too, although things tend to slide out of the shallow cubbies mount-ed below the heater controls. Yet while there are few downsides, the steering wheel is a bit of a stretch away, and the gearchange is slightly notchy - we expect it to free up in due course. However, the Colt is already very light and easy to drive, and so far we don't regret opting for the five-speed manual rather than the six-ratio AMT Allshift - a sequential transmission with automatic mode, which costs an extra £500. As far as the styling goes, the Mitsubishi follows the Jazz's lead - it's tall, without looking too much like a mini-MPV. My favourite detail is the line that runs from under the headlights, up the bonnet and A-pillar to become the roofline. However, from the inside it's the windscreen pillars which cause the most problems - they are worryingly effective at blocking visibility at junctions. It will be interesting to see how things develop in the coming months, especially with the arrival on our fleet of the Colt's platform partner, a Smart ForFour. I'll report back in due course.