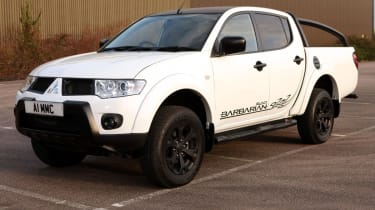 Forget the Evo X, when it comes to Mitsubishis, they don’t get much more important than the L200 Double Cab. The rugged pick-up is the most popular machine of its type in the UK, accounting for a third of the total market! And, despite increased competition, the latest model ensures strong appeal with its dramatic styling and decent driving experience. The range starts with workmanlike 4Life and 4Work derivatives, but Elegance, Animal and Warrior versions boast more equipment and styling enhancements. The range-topping Warrior even comes with a Ralliart engine power upgrade - available as an option on other versions - which pushes power up to 165bhp. Rivals include the Toyota Hilux, Nissan Navara, VW Amarok and Ford Ranger.

The Mitsubishi L200 has old-fashioned leaf spring suspension at the rear, enabling very heavy loads to be carried. But up front, there’s a sophisticated double wishbone and coil arrangement, and while it's a lot bouncier than a normal SUV. it's a lot better than pick-ups of old. The 2.5-litre turbodiesel four-cylinder engine produces 134bhp, and is smooth and torquey, if a little unrefined. The Japanese firm offers both manual and automatic gearboxes, while the L200’s off-road ability is also impressive.

Economy is pretty good for such a big vehicle, and recent tweaks have seen CO2 emissions dip below the 225g/km ‘gas guzzler’ mark. With competitive prices and excellent retained values, it's not hard to see why the Mitsubishi has been so successful.

The Mitsubishi L200 is certainly distinctive. the rounded front end with large headlights and a prominent three-pointed diamond logo on the nose are inspired by Mitsubishi's Dakar rally cars. The L200 is huge, and the pick-up bed looks as if it has been added as an afterthought, with a massive gap between the bed and the rear of the passenger compartment. The dashboard is made from plastics which only occasionally reveal the vehicle’s tough nature, and is fashionably styled with a sporty steering wheel and blue-lit dials. It’s well equipped, and buyers can even fit full-colour touch-screen sat nav.

The L200 combines four-door SUV practicality with a huge, versatile rear pick-up deck. It can be left open to the elements, but many owners fit aftermarket decks, which provide protection and security. Inside, the Mitsubishi is much more SUV-like than its utilitarian predecessor, with a decent driving position and plenty of space. There is room in the back for three adults, while the rear window can be lowered to allow access to the load deck.

Build quality is excellent, and the newcomer should continue its predecessor's reputation for faultless reliability. You only have to look at coverage of the 2011 Arab Spring uprisings to see how durable this pick up is – rebel forces fashioned impromptu assault vehicles from L200s, even going so far as to attaching heavy artillery to the pick-up bed.