It might just be for Latin America at the moment, but the Nissan Kicks SUV should prove a decent offering for buyers there 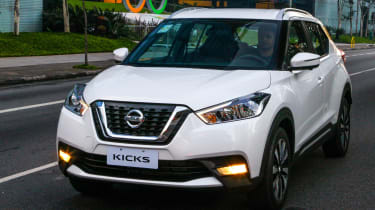 The Kicks isn’t designed for Europe - but it’s testament to what a worthy creation it is that were Nissan to decide to bring it here, it could conceivably stand up to budget rivals provided it had a better choice of engine (a diesel would be a must, naturally). As it stands, the Latin American Kicks should be a decent offering from Nissan in this area of the market, as it’s better inside than a Ford Ecosport, and dynamically not far removed from the likes of the Jeep’s Renegade.

The world can’t get enough of small SUVs - and now there’s a new crossover designed to tap into the increasing demand for such cars in developing markets: the Nissan Kicks.

The Kicks has been conceived to sit alongside the familiar Juke and Qashqai, as well as the X-Trail and not-for-UK Murano in Nissan’s SUV line-up. It’s going on sale in Latin America first, but Nissan plans to offer it in more than 80 countries worldwide. The UK and Western Europe aren’t on the list, though; Nissan clearly thinks the next generation of Juke, due to arrive late next year, will fulfil customer demand here.

The Kicks sits on Nissan’s V platform, which is the same set of chassis parts that underpins the existing Micra - and a development of the architecture that sits under the current Juke. It’s not the most up-to-date set of components, but Nissan believes it’s a strong enough technical package for regions like Latin America - while also being cheap enough to allow the Kicks to be offered at an appealing price.

The car itself is 4,295mm long - so 160mm longer than the Juke - and taller too, at 1,590mm. It’s basically halfway between a Juke and a Qashqai, in fact, which is appropriate since it’s likely to be sold in countries where those cars are either not on sale at all, or positioned at the higher end of the market. 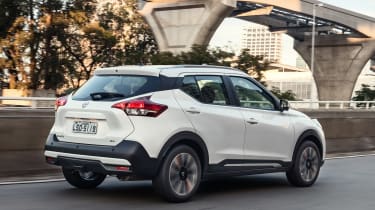 The look is a curious mix of Juke styling cues - including a distinctive hump around the rear wheelarch and the curvy tail-lights - with Nissan’s current family face. There are elements of the Sway concept (and thus the forthcoming next-gen Micra) around the headlights and front grille, too.

It’s a neat creation, in fact, especially with the floating roof created by a blacked-out C-pillar that’s also available in contrasting colours. The Ford Ecosport - a likely rival in regions like Latin America - looks old-fashioned by comparison.

Just one engine is being offered at launch - a 1.6-litre petrol producing 113bhp and 152Nm of torque on the Brazilian-spec car driven here, but 118bhp and 149Nm elsewhere in Latin America. The Brazilian car is different because it’s tweaked to accommodate the country’s strong ethanol fuel mix. Indeed it includes an inbuilt heating system which means drivers no longer have to add petrol to a sub-tank for cold starts. 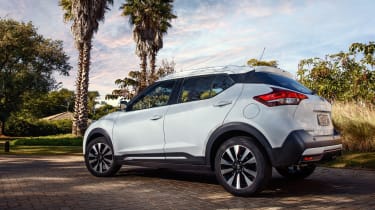 The Brazilian Kicks gets a CVT transmission - called Xtronic, in Nissan-speak - but Latin American cars will also be offered with a five-speed manual gearbox. Despite the rough nature of the roads in many of the areas where the Kicks will be sold, it’s front-wheel drive only.

The Kicks comes with a few interesting technical features designed to cope with the rougher roads in emerging markets. Of particular note are Active Trace Control, which applies the brakes mid-corner to keep the car on line, and Active Ride Control, which uses the brakes briefly when the car hits a big bump, in an attempt to iron out the car’s reaction without an expensive active damper system being fitted.

On the road, though, it’s hard to really feel that system working - which is to say that the Kicks drives like a decent but basic thing. It stays reasonably flat in corners and deals with potholes and speed bumps effectively - sorting out any resulting wobbles not at the first attempt, perhaps, but usually at the second. 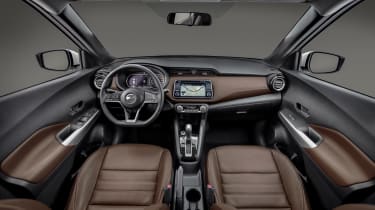 We should point out that our test route allowed only limited scope for dynamic evaluation, but the Kicks did feel a bit more rudimentary than the Ecosport, which does share some underpinnings with the Fiesta, after all.

If the chassis could conceivably be sold to Western European buyers with only a few tweaks, the engine is a different matter. It’s pretty low on torque, and the CVT box does a good job of sapping what power there is, sending revs rocketing if you try to make rapid progress. Reaching 60mph needs a mix of determination, tolerance and patience - although once you’re up there, the engine does calm down.

A 1.2 turbo would solve all of this, of course, but it would presumably make the Kicks look more pricey against the likes of the EcoSport – pushing it closer to the likes of Honda’s HR-V and the Jeep Renegade.

Inside, the dashboard is a neat mix of existing Nissan parts and switches; there’s a small colour display between the speedometer and rev-counter that can show everything from trip computer information to sat-nav instructions, if navigation is fitted. Top-spec models replace this set-up with a seven-inch TFT display alongside a single speedo dial - and they also switch the radio in the fascia for a central colour screen. The finish - particularly in the areas you touch - is better than a Juke’s. 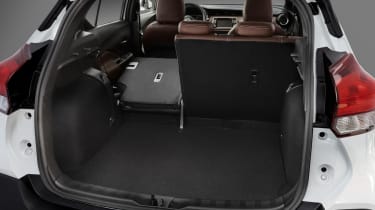 There’s a reasonable amount of space across the front cabin, and while you sit high in the rear, anyone up to about six feet tall should be comfortable enough. The boot capacity is 383 litres; Nissan claims that this is strong for the class, and it looks a useful shape, with only a small step to lift items over. There are hooks at either side capable of holding 3.3kg each.

On the face of it, the Kicks doesn’t look particularly cheap, with a starting figure in Brazil of around £21,000 - but the country’s complex rules on imported car prices and engine size taxation mean that Nissan’s offering should be in the same ballpark as rivals. On that basis, it’s easy to see how it could end up on quite a few new car shortlists.