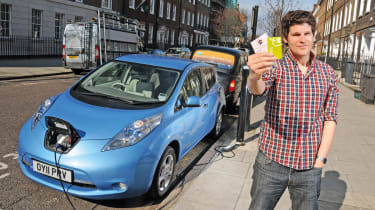 6
It can be a bit of a lottery trying to park an electric car in central London, and that has come as a big surprise to me. Before I ran our Nissan Leaf, I often looked longingly at all the empty electric bays dotted around the capital and thought to myself: “When I get the Leaf, I’ll be able to park almost anywhere. No more feeding a meter. No more paying exorbitant multi-storey car park fees.”
Advertisement - Article continues below
But having an electric car doesn’t mean you can park for free in some of London’s most exclusive shopping areas. Not just yet, anyway – and not if you don’t have the right card.
The green card you see in my hand is a Source London card. The scheme is operated by Transport for London, and for just £10 a year it provides electric car drivers with access to 284 charging bays. That price even includes the electricity you use, while Source London says the network will grow to 1,300 bays by 2013.
For now, there is some way to go. I’ll give you an example: I’m getting married in a few months’ time, and went to Hatton Garden the other Saturday to look at rings.
Advertisement
Advertisement - Article continues below

Once I’d arrived in the area, I asked the Leaf’s sat-nav to show me the nearest charging point and found a bay on John Street, a short walk away. Trouble was, when I got there my card wouldn’t unlock the charging point, as it was operated by Camden Council. (Source London says this will shortly become one of its sites.) The nearest Source London bay was in a multi- storey car park, but while that meant I could top up the battery, I could have parked there in a normal car. And I still had to pay for my parking.
Advertisement - Article continues below
If I’d just spent £26,000 on the Leaf, and then gone to the trouble of registering a separate card for charging, I would have been more than a little annoyed.
Now, this isn’t the Nissan’s fault. The sat-nav tells you where the charging points are and where the bays are – not who operates them. You need to check the Source London website to do that. And to be fair, Source London is converting bays so drivers simply need one card to access the entire lot.
Another plus is that the card gives me access to a free bay in the centre of Crouch End in north London, where I live, as well as many supermarkets and shopping centres, often by the entrance. This inconsistency is frustrating, though, and again shows that if you’re brave enough to buy an electric car, you’re at the mercy of the flawed infrastructure.
Advertisement
Advertisement - Article continues below
Still, when it’s fully charged, the Leaf continues to be a delight. I’m really enjoying the Bluetooth music streaming, which allows me to listen to all of the music on my mobile. The touchscreen doesn’t integrate fully, so I still have to select albums via the phone itself, but it’s better than always having to bring a cable.
The car is still providing zen-like comfort, too. As I spend most of my time driving in London, I’m no stranger to speed bumps – but the Leaf is so smooth, there are few cars I’d rather travel in through the city. Plus, it’s very quiet and surprisingly nippy.
The really big step forward, though, will be when Source London sorts out the charging bays. Then I’ll have the keys to the city.

“When it’s fully charged and you’re only travelling a short distance in town, the Leaf is a real pleasure to drive. You forget you’re aboard an electric car.”Dawn Tennant, Picture editor

“The Leaf is fine for short commutes. But how about a petrol range-extending version for those who want to go further?”vandenplas4litre, via www.autoexpress.co.uk