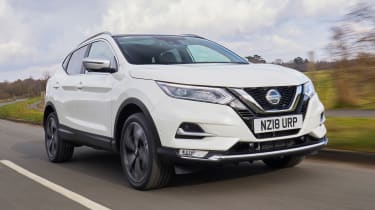 While far from groundbreaking, Nissan’s ProPilot semi-autonomous technology is smoother and better resolved than many systems on rival cars. It takes the stress out of long journeys, and if you spend a lot of time on the motorway the system could be worth its weight in gold. For now, however, those driving mainly on urban or rural roads are still better served by one of the well-equipped Tekna models.

Autonomous driving is a hot topic at the moment. Almost every manufacturer is investing heavily in self-driving tech, with the rate of development accelerating by the day.

Nissan is the latest manufacturer to launch its range of stress-depressing semi-autonomous technologies. First seen on the all-new Nissan Leaf earlier this year, the firm has now fitted its ProPilot features to the huge-selling Qashqai SUV.

Launching initially on the dCi 130 XTronic, the ProPilot options will later be available across the Qashqai range. In addition, Nissan will also offer a tech-filled Pilot One Edition, with extra features and added kit. 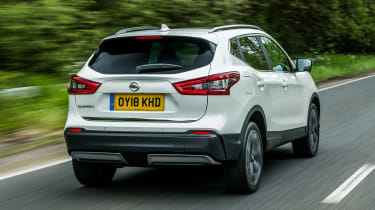 Building on the well-equipped Tekna+ grade, the Pilot One Edition gets a full suite of autonomous tech. This includes Intelligent Cruise Control and Traffic Jam Pilot, as well as Lane Keep Assist and Intelligent Lane Change Intervention.

However, unlike rival systems – many of which have been available for several years – Nissan’s ProPilot tech is operated via a single button on the steering wheel. It activates each of the systems simultaneously, without the need for complicated sub-menus or convoluted installations.

Nissan says its Qashqai now has the “eyes, brain and muscles, which detect, analyse, activate and control car operation”. By using a series of cameras and radars in conjunction with the latest steering, brake and throttle systems, it can theoretically drive for hundreds of miles without human interruption.

The way ProPilot operates is, in essence, very similar to the standard Qashqai’s adaptive cruise control system. You select your desired speed, and the system will maintain a set distance from the car in front. Providing you are travelling at more than 60kmh (37mph), ProPilot will automatically keep you within your chosen lane – with small, subtle steering inputs.

On the surface, it doesn’t appear all that groundbreaking, but the biggest revelation is how smooth and well-integrated the technology is. While some set-ups grab the brakes when they detect a hazard, or panic when a car pulls in front, the Qashqai’s ProPilot system feels progressive and well resolved. By constantly scanning the road ahead, it slows the car gently with near-human levels of anticipation. It’s incredibly intuitive to use, in fact, meaning you end up switching it on every time you join a motorway.

It’s still a ‘hands on, eyes on’ system. As such, your hands must be on the wheel at all times – and if you remove them, the car will warn you first with chime before eventually braking to a controlled stop. Unsurprisingly, this isn’t a feature we tried on our test.

Nissan says this Pilot One Edition offers buyers £1,500 of added value versus the Tekna+ car on which it is based. As well as all the autonomous software, all cars get Storm White pearlescent paint, Plum Nappa leather trim, gloss silver door mirrors and bespoke door tread plates. Aluminium pedals and a chrome exterior pack are also included.

The ProPilot package is available on Tekna and Tekna+ cars for £795 – but only on those fitted with the XTronic automatic gearbox. Manual cars can be fitted with the Drive Assist Pack (£495), which does without the Traffic Jam Assist feature.