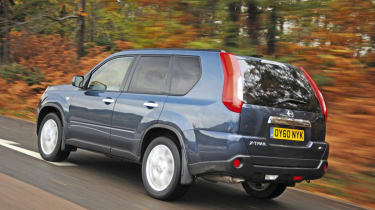 The Nissan X-Trail is one of the forgotten choices in the compact 4x4 class. Thanks to its large dimensions and boxy lines, it has a very spacious and practical interior, plus it offers decent off-road ability with its impressive ground clearance, torquey diesel engine and impressive ALL MODE four-wheel-drive transmission. But the surprising thing about the X-Trail is how car-like it feels to drive on the road – it’s much less agricultural than some of its compact SUV rivals in this respect, and the body doesn’t roll as much through corners. That’s not to say it’s perfect: road noise can become an issue at high speed, and the ride is a little firm. The interior is as solid and well built as it is practical, plus the X-Trail represents good value for money when you look at the level of standard equipment you get for the price. And although a replacement is on the horizon – the next X-Trail has a release date pencilled in for some time in 2014 – buyers who don’t mind not having the latest model should be able to get a decent discount on the already competitive price.

A 2.0-litre dCi diesel is the only engine option in the Nissan X-Trail and when hooked up to a manual gearbox it delivers 171bhp. If you want an automatic box, you have to make do with 148bhp of power – plus, this six-speed auto is available only on the top-spec Tekna model. The 171bhp diesel delivers its power smoothly, as long as you’re prepared to use some revs and work the gearbox. But at motorway speeds the boxy dimensions and rather firm ride can make for noisy and uncomfortable progress. The trade-off for the stiff suspension comes in corners, where the X-Trail doesn’t handle as you expect a compact 4x4 to. Drivers will feel much more connected than in rivals like the Land Rover Freelander, and the X-Trail can actually be quite fun. Letting down the dynamic package is the braking system; in our tests, the X-Trail has taken a long 62.6 metres to come to a halt from 70mph. But as in all models in this class, you get a great view of the road while the switchable four-wheel-drive transmission works with hill start assist and hill descent control – as well as the diesel engine’s impressive 266Nm torque output (or 236Nm in the auto) – to provide strong off-road ability when you need it.

In terms of fuel consumption, the 171bhp manual X-Trail is starting to trail behind more modern rivals. It promises 44.1mpg fuel economy, while equivalent versions of rivals like the Honda CR-V and Toyota RAV4 return much higher figures. The automatic model is even less efficient, returning 39.8mpg. CO2 emissions are no longer as competitive as they once were, either, at 168g/km for the manual car and 188g/km for the auto, and that means steep road tax bills. The line-up ranges from insurance group 32 to 35, so cover won’t be especially cheap, and all cars have service intervals of 12,500 miles. The price looks great value when you consider the amount of kit included as standard, but buyers should bear in mind that the X-Trail is due to be replaced very soon, so the current car is unlikely to hold on to that price especially well in the next few years.

The current X-Trail is the second-generation model, and first hit showrooms in 2007. But it doesn’t look all that much different to the original X-Trail, which was launched back in 2001. And while rivals like the Land Rover Freelander and new Honda CR-V leave the car appearing a little dated, it’s still a solid design. Rugged details hint at the off-road ability this car provides, with chunky bumpers and dark plastic scuff plates – and unlike many SUV-styled models in showrooms at the moment, the four-wheel-drive X-Trail delivers on this promise. Even entry-level Acenta models get 17-inch alloy wheels, chrome on the front grille and door handles, plus rear privacy glass and practical roof rails. Higher-spec n-tec+ and Tekna cars come with 18-inch alloys, side bars with steps and chrome-finished foglamp surrounds. The original X-Trail featured a rather cheap and utilitarian interior, but this latest model has taken a step up in quality and luxury. You need to go for the flagship Tekna to get leather upholstery, but lower-spec versions use the same solid interior plastics. And equipment is generous across the range, with climate control, Bluetooth, cruise control and a heated and cooled glovebox. Move up to n-tec+ and you add a five-inch touchscreen, an electric panoramic sunroof and the clever Nissan Around View Monitor, which makes for easier parking. Top-of-the-range Teknas get all this, plus a nine-speaker Bose sound system and a USB socket for MP3 players. They also add electric front seats.

Thanks to its large, boxy dimensions, the Nissan X-Trail is a very practical car. It offers a boot size of 603 litres with the rear seats in place – that’s more than in a Toyota RAV4 and Honda CR-V – and the load bay is trimmed in handy wipe-clean material. A Land Rover Freelander has a bigger boot, at 755 litres, although it trails in terms of maximum capacity. Nissan offers a flexible 40:20:40 split in the rear seats, and with them folded the X-Trail provides a huge 1,773 litres of space – the Land Rover can only manage 1,670 litres. Rear legroom in the Nissan is good and there are plenty of storage cubbyholes. All models also benefit from a heated and cooled function in the glovebox. Add the comfortable driving position with lots of adjustment on the seat and steering wheel, plus a great view of the road, and the X-Trail is a really easy car to get on with. It’s a hit with caravan owners, too, as the manual model has a 2,200kg towing capacity.

All versions of the X-Trail get front, side and curtain airbags, as well as Isofix child seat mountings and ESP – so safety is a real strength for this car. Plus, the fact that drivers can switch between two and four-wheel-drive at the touch of a button provides extra confidence in adverse weather or over uneven terrain. So it’s perhaps surprising that Euro NCAP awarded the X-Trail only four stars for occupant safety in its crash tests; newer rivals like the Honda CR-V and Toyota RAV4 have achieved the maximum five-star rating. Still, owners seem to be really happy with their cars and haven’t reported many problems: the X-Trail has always performed well in Auto Express’ annual Driver Power reliability and satisfaction surveys. In Driver Power 2013, it finished an impressive 22nd – that was down from ninth in Driver Power 2012, but still an excellent ranking considering that this is quite an ageing design. And it reflects the fact that Nissan buyers in general are satisfied with their cars: the brand ranked 12th out of 32 in the Driver Power 2013 manufacturer chart.