Nissan has transformed its pioneering X-Trail crossover from rugged workhorse into classy family 4x4. Can it beat its Hyundai rival? 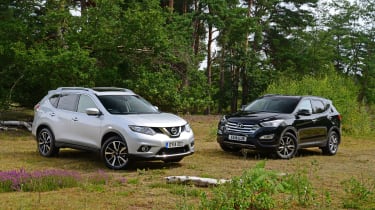 Thanks to its chunky looks, car-like handling and rugged practicality, the original Nissan X-Trail was a crossover pioneer that struck a chord with UK buyers when it was launched in 2001. Over the space of nearly 15 years and two generations, us Brits have bought 75,000 examples of the X-Trail.

However, in recent years it’s slipped into obscurity – so the all-new model aims to revitalise the SUV’s fortunes. Not only is it bigger and more efficient than before, it takes its styling cues from the handsome new Qashqai. And that’s not all; it’s also available with a practical seven-seat layout.

How will it fare against our reigning SUV champ, the Hyundai Santa Fe? The off-roader is pricier and not quite as clean, but it’s bigger, well equipped and backed by a brilliant five-year warranty.

So which car will take top honours in this off-roader duel?

You can read the full reviews of the cars by clicking the links above, and find out the verdict by scrolling down... 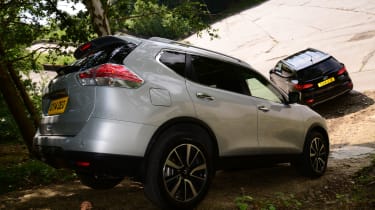 Neither of these cars is what you’d describe as a rugged off-roader, but the all-wheel-drive versions do have their benefits. They’ll have better traction in wintry conditions and can cope with tough inclines. On top of that, the Hyundai and Nissan have electronically locking centre differentials, while the Santa Fe gets hill descent control. In both cases automatic models are better suited to towing and off-road use.

There’s limited scope to add options to our test models. You could go for illuminated stainless steel side runners on the Nissan for £749, while practical features like a towbar are dealer fit extras. Hyundai options are also limited to dealer fit accessories, plus the addition of a lighter shade of trim. 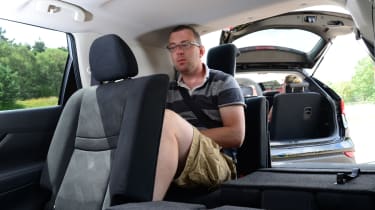 The Hyundai’s rear seats offer a bit more room than the Nissan’s, but both cars should be viewed as seven-seaters for occasional use only. Stick to five seats and you not only save money, but also get a bigger boot: the Nissan goes from 445 to 550 litres and the Santa Fe increases from 516 to 585 litres. 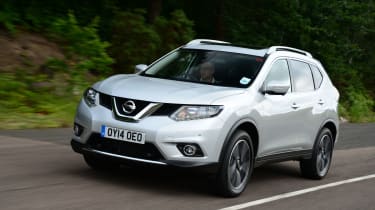 The Nissan X-Trail is back and better than ever. Its 1.6-litre diesel engine might be a bit short on performance, but like the very similar Qashqai, it’s a well built and versatile SUV. And while it isn’t thrilling, this car is better to drive than the Hyundai, while improved economy means more affordable running costs. Plus, you can get behind the wheel of an X-Trail for £22,995 – nearly £5,000 less than an entry-level Santa Fe. 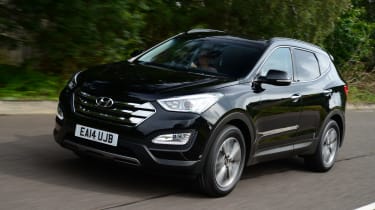 Splitting this pair is tough and the Hyundai finishes second by a tiny margin, largely due to its higher emissions and more expensive running costs. Still, the Santa Fe has more comfortable row three seats, although they’re still for occasional use. With a bigger engine it’s quicker than the Nissan. Engine refinement is better, too. The Santa Fe is still a strong contender in this class.