Our review of the all-new Peugeot 2008 SUV, which is set to take on the likes of the Nissan Juke 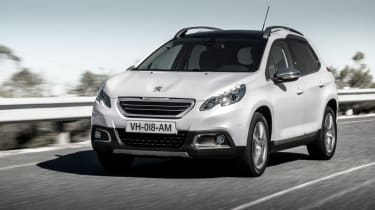 The Peugeot 2008 doesn't necessarily offer anything new in the compact crossover class but it's comfortable, spacious and classy, while boasting a price that's low enough to draw in buyers that may have been looking elsewhere. Peugeot is expecting just an £800 gap between 208 and 2008 models, which seems like a low price to pay for a car that's almost as efficient, a little more comfortable and a whole lot more spacious. The 1.6-litre e-HDi diesel is our pick because of its excellent performance and refinement but if we'd been testing the 1.6-litre petrol here, it could have easily lost a star.

The Peugeot 2008 is the latest model to jump on the back of the burgeoning compact crossover boom, but when you've got as much competition as this car has, it's got to be seriously good.

Not only have you got the ubiquitous Nissan Juke, but you've also got newcomers like the Vauxhall Mokka and upcoming players like the Clio-based Renault Captur. If there's one thing all these cars share it's eye-catching design, and Peugeot has gone down the same route.

The swept-back headlights and bold chrome grille are obviously inspired by the 208 (with which the 2008 shares its platform), while at the rear it gets a set of 'claw'-shaped LED lights. A few bespoke touches mark the 2008 as more of a rugged SUV, like the underbody protection, raised ride-height and roof rails.

Inside, the differences between this car and the 208 will be a little harder to spot, but that's no bad thing. Soft-touch plastics, satin chrome and classy gloss black inserts all add up to a premium feel that's far beyond what's offered in the Nissan Juke. Unfortunately the tiny steering wheel and awkwardly placed dials are both carried over, too. Allure models and above come with a laser engraved light signature that looks like claw marks in the ceiling, although this can be replaced by a huge panoramic sunroof for a price.

We're driving the 1.6 e-HDi diesel model with 113bhp, but there is also a 90bhp version of this engine as well as a 1.4-litre unit with 69bhp. The 1.6-litre is extremely refined and barely ever sounds rough. It's actually quite a lot quieter under acceleration and on the motorway than the 118bhp 1.6 VTi we also tested.

It feels better from behind the wheel, too, with a lot more kick than the petrol, despite the petrol being officially quicker from 0-62mph. Our diesel claims a time of 10.4 seconds, while the 1.6 petrol manages the same sprint in 9.5 seconds.

And there's all the more reason to go for diesel over petrol because of this engine's great running costs. Peugeot claims an economy figure of 70.6mpg, with CO2 emissions of 105g/km – so low because the 2008 only weighs just over a tonne and all models are front-wheel drive only. Go for the lower-powered diesel with the EGC auto gearbox and CO2 emissions will get as low as 98g/km.

Anyone used to driving a 208 won't find it too much of a jump to get behind the wheel of the 2008. All the controls are just as lightly weighted, and it feels just as compact, despite the fact it's around 200mm longer. The ride feels ever so slightly more supple, although there's still a hint of firmness around town but it's never bad enough for you to notice it. Unfortunately there's quite a lot of wind noise on the motorway, and if you go for the 1.6 VTi petrol model you'll notice a lot of engine noise too.

By having the small steering wheel as the 208, Peugeot is aiming to make the 2008 feel sporty and quick to react. In practice, it never feels quite as agile as the 208, with slightly more body roll and reactions that just generally feel a little slower. Off-roading isn't supposed to be part of the 2008's everyday life but Allure and Feline models do get grippier all-year tyres and a Grip Control system that provides better traction on slippery surfaces.

Peugeot confirmed at the launch of the 2008 that an estate version of the 208 wouldn't be launched and that's most likely down to the fact that the 2008's dimensions make it so practical. Having four adults on board isn't a problem, while standard boot space is 360 litres – about the same as a Vauxhall Mokka but far larger than a Juke's 251-litre load area.

Prices start at £12,995 but that still buys a car equipped with air-con, central locking, front electric windows, LED lights at the front and rear, and cruise control. Allure is the trim level we'd recommend though, with Grip Control and classy LED lighting throughout the cabin making it feel a lot more like a premium SUV.