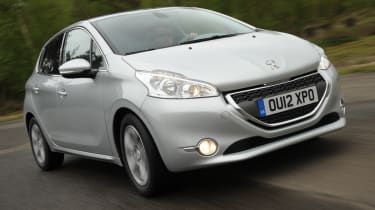 Stylish design and a premium cabin will be enough to make this new Peugeot a big hit. We knew from our previous drives that the car would struggle to outshine models such as the Ford Fiesta on the road. However, the 1.2-litre gets closer than any other 208 we have tried so far, thanks to its low running costs, characterful engine and sharper handling.

These days, small cars aren’t necessarily cheap and bland; take the funky Fiat 500 or classy Citroen DS3 for example. So Peugeot’s latest supermini, the 208, has to offer the same kind of style, luxury and dynamics to compete. How does it do?
When it comes to aesthetics, the 208 performs very well. The chrome-rimmed grille, swept-back headlights and large, centrally mounted Peugeot badge on the bonnet are all inspired by the SR1 concept car. Place the 208 side-by-side with a Volkswagen Polo, Ford Fiesta or Renault Clio, and it will certainly attract most of the attention.
The cabin gets a similarly stylish design, while our mid-spec Allure boasts sports seats, as well as a leather and chrome steering wheel. A mix of gloss black trim, metal inserts, leather and soft plastics adds to the premium feel. It’s not perfect, though, as the high-mounted dials are sometimes obscured by the small wheel, especially if you’re a tall driver.

Previously we’ve tested the efficient 1.6-litre e-HDi diesel and the naturally aspirated 1.6 VTi petrol. But this is the first time we’ve tried the 1.2 VTi three-cylinder petrol model on UK roads. It has 82bhp, which is good enough for a 0-62mph time of 14 seconds. The engine will be just enough for most people’s needs, with enough power to mix with the big boys on the motorway.
The engine has other benefits, too. Not only does it sound fantastic, right up to the red line, but with economy of 62.7mpg and CO2 emissions of 104g/km the Peugeot should prove incredibly cheap to run, too.
In corners, the 1.2-litre feels like the best-handling 208 yet. A look at the spec sheet reveals the reason why; this engine makes the car 105kg lighter than the four-cylinder petrol we drove. As a result it’s more willing to change direction, and darts in and out of bends with an agility we felt the 208 was previously missing.
Unfortunately, the car is still not as good to drive as the Fiesta – the light and numb steering struggles to deliver much involvement. What’s more, the ride isn’t quite up to scratch. Over rutted roads we noticed the firm suspension set-up sending bumps into the cabin that wouldn’t have been felt in some of the Peugeot’s rivals.
This combination of engine and trim level will set you back £13,495, which is what you’d expect to pay for an equivalent Fiesta or DS3. Compare the 208 on dynamics and it won’t come out on top, but with buyers more and more focused on style, emissions and luxury, the car – this 1.2-litre model in particular – should prove incredibly popular.
Share this on TwitterShare this on FacebookEmail