Our Peugeot 208 has been beset by niggles. Can we wash them away? 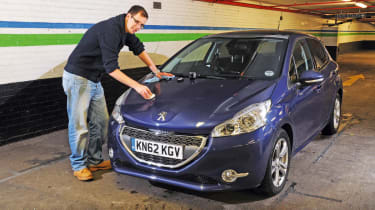 To make any relationship work, you have to put the time in. So I’ve got out my bucket and sponge in a bid to reignite the spark with our Peugeot 208.

Our honeymoon period was wonderful. The showroom-fresh metallic paint looked brilliant, the 208’s light steering was great around town and the three-cylinder engine sounded fantastic. Then the car broke down.

I was driving along the motorway when a light on the dash warned me of an engine temperature fault, and the engine cut out. After a quick call to Peugeot Assistance, an AA van came out to me, and 90 minutes later a mechanic diagnosed a loose coolant pipe. It was simple to fix, but as the car had only done 2,000 miles, it put a strain on our relationship.

Barely a week later, we were back in the garage. I’d been told that a technical service bulletin had been put out on our car to check some bolt fixings. It wasn’t serious – less than 300 UK vehicles were affected – and Palmers Peugeot in Hemel Hempstead, Herts, did the work for free in two hours. But it reinforced a stereotype about French cars’ reliability, and I started to think the 208 would emulate my old Renault Clio, which regularly went wrong.

The more time I’ve spent in the Peugeot, the more minor niggles I’ve noticed. On one occasion, while driving along a main road, the sat-nav went blank and displayed the message ‘GPS fault’. It rectified itself soon after, and this hasn’t happened since, but drivers posting on the www.208ownersclub.co.uk forum have reported similar problems.

Another annoyance is that the sat-nav doesn’t have a postcode input – you need the full address of your destination. This isn’t always possible, so I’m forced to switch to my smartphone’s sat-nav app instead.

Fuel economy hasn’t impressed me much, either. It’s rising steadily – I now average 36.9mpg compared to 35.6mpg in November – but that’s still a long way off the claimed 62.8mpg figure. We’d hoped for better now there’s more than 4,000 miles on the clock.

I’ve mentioned before that the glovebox is tiny, as Peugeot didn’t move the fuse box in the switch from left to right-hand drive, but I’ve since noticed another cost-cutting measure. As the bonnet release is in the passenger footwell, you have to walk round the car if you want to access the engine bay. Again, it’s only a minor niggle, but at this time of year, you’re doing it more often to fill up the screenwash reservoir. Finally, the windscreen wipers are coming up frustratingly short, leaving dirty patches as they sweep across the screen.

All of this has left me disheartened about life with our supermini. Peugeot’s slogan is Motion & Emotion – I only hope a clean, and some quality time at the wheel, can change my emotions from frustration to happiness.

“My 1.4-litre Honda Jazz makes the 208’s fuel economy look really bad. My car averages 48mpg, and has done since new.”Alan, via www.autoexpress.co.uk