We'll review the Peugeot 208 GTi next week but, in the meantime, check out our exclusive ride... 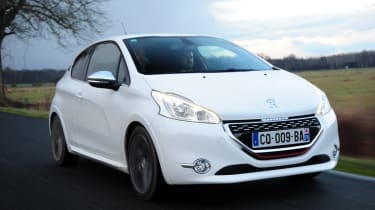 Confidence is a funny thing. Yet the more you speak to the people closest to the new Peugeot 208 GTi, the more you start to believe this car could be something special.

Peugeot has given us exclusive access to its latest hot hatch contender a full month before it’s launched, and we’ve used that opportunity to get first-hand experience of what it feels like on the road.

Under the bonnet is the same 1.6-litre turbocharged engine as fitted to the flagship RCZ GT coupe, producing 197bhp and 275Nm of torque, so we’re expecting real fireworks. But before climbing aboard, we took time to chat to our driver for the day.

Senior engineer Gaëtan Demoulin is the man charged with, as he puts it, “making sure Peugeots drive like Peugeots”. He plies his trade testing new models on the Alpine roads around the company’s factory in Sochaux, eastern France.

From the outset, he is very clear about what goes into making a true GTi. “Key points such as a powerful engine, good suspension, good noise and traction control that can be turned fully off are the building blocks of any sporty car,” he says. “Then you are faced with a choice – do you create a hard racing version or a GTi?”

When pressed about exactly what that means, he sums it up even more simply: “The 208 has been made so that it can be driven every day – that’s the GTi spirit.”

We settle down into the bolstered sport seats and take in the cabin’s racy red detailing before Demoulin drives on to the autoroute to take us away from Paris. After covering just a few miles, it starts to become clear what he is talking about.

The lowered suspension and wider front and rear track mean the ride is noticeably stiffer than on the standard 208. And yet the GTi still feels supple over big bumps. In fact, from where we’re sitting, it’s very similar to a Citroen DS3, which is a big compliment.

Demoulin short-shifts through the six-speed manual gearbox, but even at 80mph the GTi still feels refined and docile. Soon, though, the buildings melt away into wide-open farmland and our driver begins to increase the pace.

As the revs climb, the note from the exhaust takes on a harder edge. Over the noise, Demoulin tells us that once the revs peak at 5,800rpm, the power curve is flat with no drop-off as you approach the red line.

As we hit our first sequence of faster bends, he makes small adjustments to the steering angle, but the GTi remains impressively planted. It feels like there’s plenty of grip, even on these sleet-covered country roads.

Peugeot has tinkered with the steering of the GTi to ensure that while it remains light and easy at low speeds, it weights up more than the standard car when you’re cornering.

We ask Demoulin what roads suit the 208 GTi best. He tells us that on wide, fast corners it feels most rewarding, but to be truly nimble in hairpin turns it could stand to lose a few more kilos – making a 208 Rallye an even more tantalising proposition.

Knowing rivals such as the Ford Fiesta ST and hardcore new Renaultsport Clio Turbo are also poised for launch, our first encounter with the 208 did throw up some thoughts. The suspension felt a bit jittery when weaving through small, narrow villages, so we hope it will stand up to Britain’s rougher roads. Also, the luxury interior and restrained styling can seem a little too grown-up.

Nevertheless, the GTi badge is so evocative that we’re sure the car will be able to overcome any little niggles and live up to the legend.

Check back for the first full review of the production-ready Peugeot 208 GTi on 27 March.