Facelift and a price cut boost appeal of crossover, but it is feeling its age against an array of new contenders 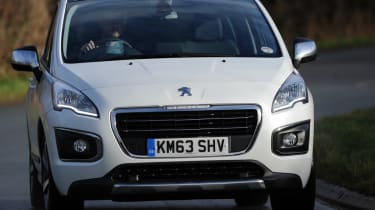 The fact that the 3008 has been such a success isn’t too great a surprise. The cabin is spacious, well equipped and practical, and it drives reasonably well. The new look adds appeal, too, and the spec update and price cut are welcome. But the main problem for Peugeot now is that the competition has moved into a different league.

Peugeot admits that the 3008 has been a surprise success, with sales beating expectations by 50 per cent.

Since 2009, 57,000 have found homes in the UK – 10 per cent of the global total. But with a new Nissan Qashqai and facelifted Skoda Yeti on the scene, Peugeot has revised the 3008 and dropped the price in a bid to keep sales up.

The revamped model remains the same under the skin. The 1.6-litre diesel is smooth, and feels more punchy than the claimed figures suggest. But the six-speed gearbox’s long throw lacks precision, and the steering feels too heavy when you add lock, and unresponsive around the dead-ahead. There’s quite a bit of kickback from potholes through the wheel, too, and the 18-inch wheels on our test car seem to amplify road roar.

The ride is on the firm side, although the 3008 is pretty comfortable when you’re cruising on the motorway. And while the interior is a bit dated in terms of design, it’s spacious, with a good, high-ish driving position and decent visibility. Space in the rear is impressive, and the feeling of light is helped by a huge panoramic roof.

There’s a big boot, too, with an adjustable floor for carrying different-sized loads. And there are kit upgrades, with Bluetooth added across the line-up, and the head-up display in colour.

Allure is the top-selling spec, and now includes a reversing camera as standard, along with Peugeot’s rather fiddly sat-nav. As an added bonus, the Allure model costs £150 less than before. The 3008 is intended to combine the looks, practicality and drive of an MPV, SUV and conventional hatchback.

And while the original’s styling was a collision between all three, the new front bumper and grille help make the updated car appear a bit more dynamic, plus new LED tail-lights tidy up the rear. All in all, it’s a successful update, although the 3008 is still among the more challenging-looking models in the class.

Despite the space, extra kit and price cut, the 3008 is outpaced by the Qashqai. The equivalent Nissan is better to drive and to look at, and although it costs £495 more, it’s cheaper to run.