Our images reveal a radical new look for the next-generation 308 and Megane, ahead of their arrival next year 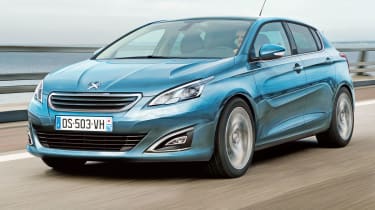 Just when you thought the new VW Golf had the family hatchback class sewn up, the French are coming out fighting.

Peugeot and Renault plan to build on the momentum of their 208 and Clio superminis with radical replacements for the 308 and Megane next year.

As you can see from our artist’s illustrations, it’s the Peugeot 308 – set to debut at the Frankfurt Motor Show next September – that will get the most extreme overhaul. Our sources say it’ll be shorter and lower than the current 308, with a more dynamic silhouette.

Peugeot’s new design language will give it a smaller grille, narrower headlights and a series of bold creases along the bodywork. The company will continue with the 308 name as part of a new strategy that sees all its models end in 1 or 8. Using a development of the current car’s platform, the 308 will initially only be offered as a five-door hatch, with estate and drop-top models to follow. Engines will include 1.6 and 2.0-litre diesels, plus a three-cylinder 1.2 petrol and a diesel-electric HYbrid4.

The new Megane, due around the same time as the 308, will follow the latest Renault family design, with a big lozenge badge and full-width front grille flowing into the headlights. But it won’t shake things up like the 308 – as Anthony Lo, Renault VP of exterior design, told us. “We don’t want to change the Megane radically,” he said. “We have to do more of the same and resist making it bigger.”

As with the current range, the new Megane will be offered as a five-door, three-door (which will spawn a Renaultsport version) and an estate. And like the 308, it will use a three-cylinder petrol engine.

VW Golf: The new Golf shifts the goal posts yet again, with class-leading quality, technology, practicality and value for money.

Nissan Sunny: Set to arrive in 2014, Nissan’s Golf rival will be built in the UK. A hot Nismo version will take on the Golf GTI.

Toyota Auris: Toyota’s top seller is lighter, better-looking and more efficient than before. Unlike Golf, there’s a hybrid.

Audi A3 Sportback: Five-door A3 is more sophisticated, yet just as practical as a Golf – but also more expensive to buy.

SEAT Leon; New Leon is based on the same platform as the A3 and Golf, but gets dynamic new styling.

BMW 1 series: Our current class leader is brilliant to drive and comes very well equipped. It’s definitely not cheap, though.

Skoda Octavia: The value pick if you’re after a well built, spacious hatch, it comes next year with VW engines and tech.

Vauxhall Astra: A recent facelift has bolstered the line-up, with its wide range of bodystyles and powerful, efficient engines.

Ford Focus: The Focus is the current best seller and available with everything from a frugal 1.0-litre to a 247bhp 2.0-litre turbo.