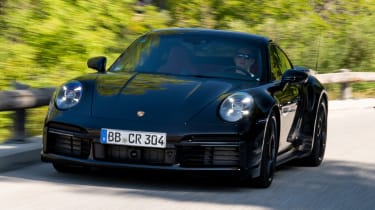 Faster than ever but supremely refined, Porsche has polished and evolved the Turbo formula rather than reinvented. This new 911 Turbo is shaping up to be quite a machine.

When the word Turbo was pasted onto the back of a car you knew it was something out of the ordinary. It stood for speed, exclusivity and hair-raising performance. But today? Diesels are proudly called turbos, small cars carry it alongside their name and it’s even applied to Porsche’s own electric Taycan.

Even with all of that, the word Turbo is still synonymous with one car - the 911. And with the new 911 Turbo, which we’re sampling from the passenger seat for the first time, it’s clear Porsche’s engineers have taken it to a new level.

We joined Porsche’s development team in the south of France as they apply the finishing touches to late prototypes. The minimal disguise makes it easy to pick out the Turbo’s trademark design cues; bulbous wheel arches, deep bumpers and a subtle rear wing leave you in no doubt that this is the hottest of 911s. 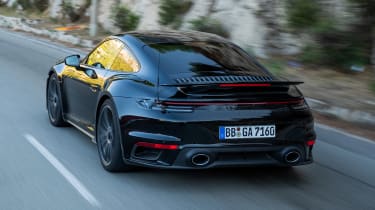 The wraps will officially come off the car next year, possibly at the Geneva Motor Show, along with all the technical information. So although we can’t confirm the official power figures Porsche’s engineers were happy to point us in the right direction; the Turbo is expected to develop 600bhp and 750Nm of torque, while the flagship Turbo S is likely to kick out a staggering 650bhp and 800Nm. That’s almost an additional 80bhp over today’s model.

Porsche had considered bringing electrification to the Turbo range, but the added performance brought by the system didn’t offset the added weight, cost and complexity. So the engine hanging over the rear axle remains a 3.8-litre twin-turbo flat-six but it is completely new. And an investment in the “high double-digit million euros” one engineer told us.

We know Porsche is regularly conservative with its 0-62mph acceleration figures, and engineers refused to give us a more accurate estimate than ‘less than three seconds’ for the new Turbo S. But having experienced it from the passenger seat, that figure is more likely to be around the 2.6 second mark. The ferocity of the acceleration, when you engage the launch control system, is simply staggering.

Not an ounce of traction is wasted by the four-wheel drive system, which hooks up to the tarmac and spits you down the road at a relentless pace. It’s the Turbo’s party piece and only too happy to repeat it again, again and again. It’s almost certain that your internal organs will give up before the car does.

New for this 922-generation Turbo is a light, snappier sounding sports exhaust system, which can be seen with the trapezoidal tailpipes. As has always been the case, the Turbo isn’t the sweetest sounding 911 but it has a more thunderous set of vocal cords this time around.

Engineers have also worked on the suspension to give the car a more intimate connection to the road for more precise reactions. New active aerodynamics and optional sports suspension that shortens the springs by 20 millimeters are said to improve response even further. But we’ll have to wait until we’re in the other seat before we can fully assess that claim.