Porsche 911 goes turbocharged across the range – but has it lost some of its legendary character as a result? 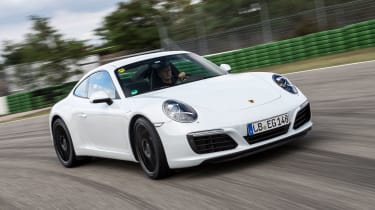 We’ll reserve full judgement until we get to drive the new turbocharged Porsche 911 Carrera S at the end of the autumn, but the signs are unreservedly positive. Porsche purists might moan that the flat-six engine in the rear is no longer naturally aspirated, but with more power and torque, improved efficiency and some advanced interior tech giving this 911 an even bigger breadth of ability than before, this facelifted 991-generation model carries on where the old car left off.

The Porsche 911 is arguably the world’s most iconic performance car, so with a formula that’s not changed much over the last 50 years, when there’s a tweak in the model rage petrolheads sit up and take note. Especially when it’s this significant too, as with this facelifted ‘991’ version Porsche, the regular 911 line-up is now all turbocharged.

We went to the Hockenheim race track in Germany to get an in-depth look at the tech underneath the new car, as well as riding on board to see if turbocharging this Carrera S variant has lost some of the old car’s characteristic rasping exhaust note.

We’re pleased to say it hasn’t. Using turbos to generate extra power can rob a car of an effervescent soundtrack, but Porsche has worked hard to keep the 911’s trademark sound. Sure, it’s lost a touch of that high rev zing from the old car, but breathing through a sports exhaust here, the bark from the engine inside and out is still intoxicating. And so is the speed. 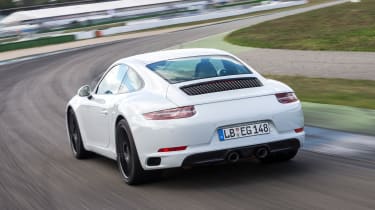 The new-generation 3.0-litre twin-turbo flat-six pumps out 414bhp and 500Nm of torque from as low as 1,700rpm all the way to 5,000rpm. This is 20bhp and 60Nm more than before, and in a car that only weighs 30kg more than its predecessor it has a massive effect.

Opt for the seven-speed PDK dual-clutch transmission – featuring modified gear ratios and some software tweaks for even faster shifts – and the Carrera S will sprint from 0-62mph in just 3.9 seconds, hitting 190mph flat-out. It feels ferocious off the line and the mid-range shove from those two turbos force-feeding the engine with air is eye-widening.

From the passenger seat it’s hard to get an idea of throttle response (we’ll tell you more once we have our first drive of the car), but the boost builds quickly and the engine still revs with linearity all the way to the 7,500rpm limiter. 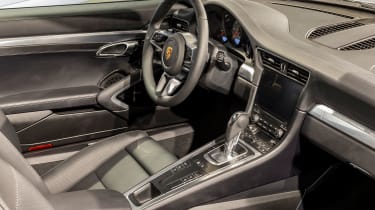 There’s huge grip on offer, and a chassis balance typical of all 911s. Porsche Active Suspension Management adjustable dampers now come as standard and the 911 rides 10mm lower than its predecessor. It means the car’s breadth of ability is now even broader, with a comfortable ride in the standard setting and taut body control in Sport.

Opt for the Sport Chrono pack and you also get a rotary dial on the steering wheel to switch between modes, just like the hybrid Porsche 918 Spyder, with an Individual setting to tailor the configurable features exactly how you want them.

Porsche has added a Sport Response button, too, that primes the engine for maximum power and changes down to the perfect gear, delivering a 20-second burst of performance for when you’re overtaking on road or track. 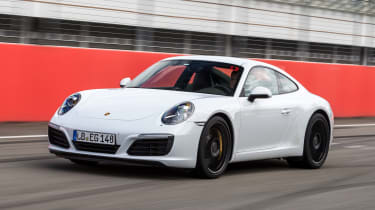 Along with a new PSM Sport stability control setting, if you’re confident behind the wheel like our Porsche test driver it means you can throw the 911 around letting the car drift a surprising amount before the systems cut in and save you from a spin.

This Carrera S is also now available with rear wheel steering as an option, inherited from the GT3 and full-fat Turbo models to give even more agility in turns and greater stability at high speed. You can feel it working, and for such a big car, direction changes are quick, while it feels planted through quick corners.

The extra engine torque on tap also means it’s more adjustable at lower revs, but it’s not the only benefit the new turbocharged engine brings. Active aerodynamics and a revised coasting function mean efficiency is also up. Officially, this PDK-equipped Carrera S will return 36.7mpg combined and 174g/km CO2. 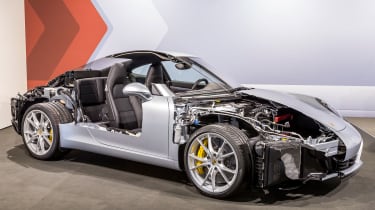 Styling changes are limited, with the engine cover now featuring vertical instead of horizontal slats to help feed the turbos with air, while the rear bumper has extra vents to let hot air out. A set of 3D rear lights and a few other subtle design tweaks complete the facelift outside.

Inside, Porsche has added a new seven-inch touchscreen sat-nav system that incorporates online navigation and clever gesture control. Spec the Apple CarPlay feature and you’ll be able to slickly connect your iPhone to the 911 for real-time traffic info and other connected services.

New smartphone apps help here too, and a quick play with the system showed an improvement over the regular touchscreen in the old 911, so it’s another feature that highlights just how usable this Carrera S will be. Two small rear seats and a 145-litre boot in the nose is the icing on the cake.