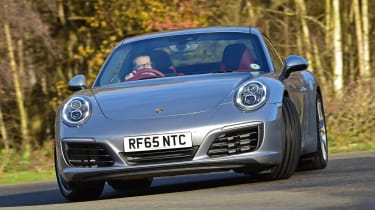 The 3.0-litre twin-turbo flat-six is the big news in this 911 Carrera, but Porsche purists needn’t worry, as it’s a fantastic engine. 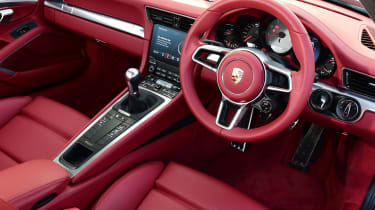 Whereas you’d have to work the old car’s gearbox hard and keep the revs high to extract the performance, in this new 911 you can leave it in gear and just let the engine pull.

It’s the same story in the Carrera S, except it’s quicker. Go for the PDK gearbox with Porsche’s Sport Chrono option and you’ll rocket off the line to 62mph in 3.9 seconds, making this the first ‘normal’ 911 to dip under the magic four-second barrier.

The S gets 414bhp and 500Nm of torque, so it feels even more ferocious in the mid range. Compared with the previous model, the 911 benefits from a 20bhp boost and 60Nm more torque, and with only 45kg of extra weight, it’s no surprise Porsche has taken performance to the next level.

In the PDK-equipped Carrera 4S that 0-62mph time drops to 3.8 seconds, making it the first four-wheel drive 911 to be faster than its rear-wheel-drive sibling. It’s thanks to a new four-wheel drive system borrowed from the Turbo and Turbo S that can distribute power more accurately to the wheels that need it most. The result is incredible traction and scorching pace off the line.

However, while the shove at normal road speeds is much stronger and sustained longer than before, the 911 has lost a little of the old car’s high rpm fireworks. Maximum revs are now capped to 7,500rpm, and that charge towards the rev limiter isn’t as strong as before.

The noise is still there, though, this time overlaid with a faint whoosh from the turbos as they spool up and provide extra power. The standard cars still have that typical, bassy Porsche sound at idle that morphs into a bark in the mid range. Go for the twin-pipe centre-exit Sports exhaust and you’ll liberate a few more decibels, too.

While you might not have to work the gearbox quite as much, it’s still a pleasure if you want to, as the PDK swaps cogs smoothly and quickly – it’s great in auto mode and gives a delicious blip when changing down using the paddles. 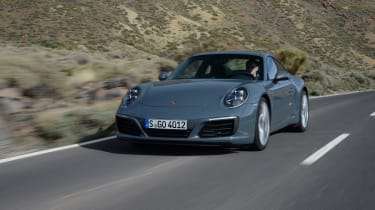 There’s a revised manual option for this model, too, with a twin-plate clutch design that makes the pedal lighter and therefore more usable in traffic. The gear lever throw is short and the action light, but like all Porsche manuals, it’s mechanically precise and lovely to snick up and down the box with.

Porsche has increased this car’s breadth of ability by fitting its PASM Porsche Adaptive Suspension Management adjustable dampers as standard. This means the car sits 10mm lower than before, but don’t think it means the ride is back breaking.

With Normal and Sport modes for the suspension, you can cruise around in plenty of comfort, even on big wheels. The car soaks up bumps and bad roads well, but if you go for bigger alloys you will feel potholes.

Switch into Sport mode and the 911 takes on a harder character, with firmer damping giving even more body control. It still boasts a supple ride and is fairly comfortable, but we’d save this for sportier driving or track days. If you’re into that sort of thing, it’s worth considering the optional rear-wheel steering system on the S model – at lower speeds the back wheels steer in the opposite direction to the fronts, giving incredible agility and turn-in grip. At high speed the rear wheels steer the same way as the fronts, improving stability in fast corners.

The Turbo S gets this as standard, giving it incredible agility for such a big car. Allied to 572bhp from its larger 3.8-litre twin-turbo flat-six and that revised four-wheel drive system it serves up devastating performance.

This is the first Turbo to dip under 3.0 seconds from 0-62mph, so although Porsche quotes 2.9 seconds it’s engineers say they reliably saw 2.6 in testing. It’s also the first Turbo to hit more than 200mph, topping out an incredible 205mph.

The fearsome GT2 RS is the maddest 911 in the ranks, offering a delightful blend of ferocious performance and extraordinary delicacy. It’s a thrilling and visceral experience, with capabilities way beyond what’s exploitable on the road. It’s also £100,000 more than the GT3, which remains an absolute masterpiece, albeit only available to an exclusive and selective club.

If you've got six figures burning a hole in your pocket, you could also consider the GT3 RS. Facelifted in 2018 the GT3 RS offers, like the GT3, a naturally-aspirated 4.0-litre straight six, but one that produces 513bhp instead of the GT3's 493bhp. The GT3 RS also features more extreme bodywork than the GT3, together with a series of incremental improvements to the suspension, steering and gearbox that make it even more focussed, particularly on track.

Few are able to experience the joys of GT3 ownership, which is where the new 911 Carrera T comes in. For £85,000, the T promises mini-GT3 levels of enjoyment for a more modest price. It offers no more power than the standard Carrera, but achieves greater performance through weight-saving measures and specification upgrades.

Predictably, the Carrera T is hugely enjoyable to drive, especially in manual guise, but we just wish it felt a little more special.

Both the Carrera and Carrera S engines feel very similar from behind the wheel – that’s because they are. The models both use the same 3.0-litre twin-turbo flat-six, but the S gets bigger turbos that push more air into the engine, therefore giving it the extra power over the non-S variant. GTS models are more powerful still with 444bhp. 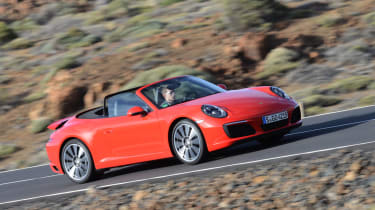 Throttle response can sometimes be a problem with turbo engines, but here Porsche’s engineers have worked hard to give the feel of a naturally aspirated unit. Push the throttle to the stop, and at anything other than very low revs the 911 takes off rapidly, as you feel the torque swell and sweep the car along.

And if that’s not enough, PDK-equipped cars with the Sport Chrono pack get a new Sport Response button – push it and the gearbox changes down to the perfect gear for a burst of acceleration, while the engine is primed to deliver maximum power. It lasts for 20 seconds and is great for overtaking.

The Turbo and Turbo S share the larger 3.8-litre engine, except the S has bigger compressors for more shove. The Turbo S is the powerhouse of the pair, with 572bhp and a massive 750Nm of torque produced from 2,250rpm.

There’s also a Dynamic Boost feature to reduce turbo lag even further, and throttle response is great, even if it’s hard to tell an improvement over its predecessor.

Like the Carrera, as the Turbo S uses exhaust gasses to spin a compressor, forcing more air into the cylinders, this reduces exhaust noise compared to a naturally aspirated engine. It means the Turbo S isn’t as effervescent in the engine bay as some of its main rivals – like the glorious V10 Audi R8 and the raucous McLaren 570S – but that’s a small mark against the very slick powertrain.

The limited edition Turbo S Exclusive Series is even more powerful, with Porsche tuning the twin-turbo 3.8-litre flat-six to deliver an extra 27bhp, taking it 1bhp shy of 600bhp. Torque remains the same at 750Nm.

But this isn’t the most powerful 911 you can buy, with that accolade belonging to the mighty GT2 RS, essentially a cross between a GT3 RS and Turbo S, with its 3.8-litre engine pumping out 690bhp – almost 120bhp more than the Turbo S.

The GT3 remains resolutely old-school and the only non-turbocharged 911 in the range, powered by a 4.0-litre flat-six engine, developing 493bhp and 460Nm of torque.