Does less weight make for a more exciting Porsche 911? We’ve driven the new Carrera T in the UK to find out… 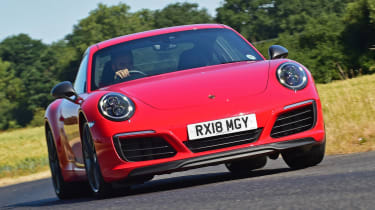 The Porsche 911 Carrera T is undoubtedly one of the finest-handling sports cars money can buy. But then again, so is the standard 911. While some customers will value the T’s unique specification, for most the normal car will do just fine – and it costs almost £8,000 less.

The current Porsche 911 range now spans a baffling 24 model variants. From the basic Carrera to the bonkers GT2 RS, there’s a coupe, Cabriolet or Targa for everyone.

The latest addition is this: the 991.2-generation 911 Carrera T. Based on the entry-level Carrera with a few of the non-essentials removed, it’s a lightweight, rear-wheel-drive sports car designed to emulate the purity of the more expensive GT3 models.

There’s less sound insulation, and the interior door handles have been replaced by a set of fabric pulls. The rear seats have gone, and the standard rear and side glass is thinner, too. Customers can even spec their 911 T without a stereo or sat-nav, although our test model featured the responsive Porsche Communication Management (PCM) system with Apple CarPlay connectivity.

In addition, every Carrera T gets special side graphics, bespoke badging and unique sill plates. There’s a shortened gear lever, contrast stitching and an Alcantara roof lining – and despite its low-weight focus, every car gets a set of electrically operated sports seats, too. These can be swapped for a pair of GT3-style buckets (£3,324) – an option not available on the standard Carrera. 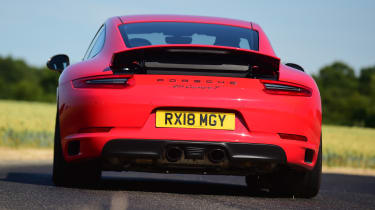 Power and torque are unchanged over the standard Carrera, but Porsche says the weight savings amount to roughly 20kg. Added to the shorter gear ratios, the Carrera T shaves one-tenth of a second off its donor car’s 0-62mph sprint. It feels aggressively quick; the PDK is faster still.

On the road, you’d be hard pushed to feel that extra response, although our car’s rear-axle steering and limited slip-differential (manual cars only) did give the 911 T a level of added agility. The steering is super-sweet and brimming with feel, while grip on dry roads is astounding. As always, you can switch between Sport, Sport Plus or Individual drive modes, with the auto rev-matching system making for seamless heal-and-toe-style downshifts.

The controls are heavy, yet communicative. But while the lowered suspension means the ride is stiff around town, on the open road there’s a real delicacy to the way this car runs over ridges or ruts on broken tarmac. The seats are supportive, too. 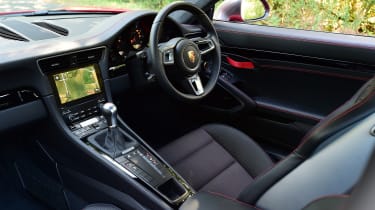 The sound the current 911 makes may not be as intoxicating as the naturally aspirated pre-facelift cars, but the T’s sports exhaust ramps things up with a throaty growl. The torquey turbo motor requires fewer gearchanges, of course, but if you choose to work the box you’ll be handsomely rewarded with one of the fastest real-world road cars on sale.

But most of this is true of the standard 911. Perhaps the most obvious difference between the normal Carrera and the pricier Carrera T is that lack of sound insulation. Things aren’t helped by the wide 305-section rear tyres, but the road noise on harsh surfaces can be particularly intrusive, making this 911 a less usable everyday car. Over 650 miles, the incessant tyre roar became quite draining – especially on the motorway.