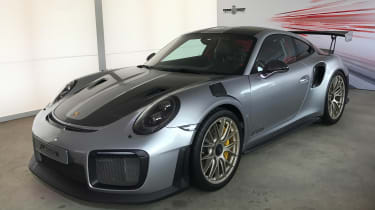 Porsche has pulled the sheets off the most powerful 911 ever – the eagerly anticipated 911 GT2 RS. It makes its full debut at the Goodwood Festival of Speed, after a brief cameo earlier this month at the E3 gaming expo in Los Angeles.

The headline figure is the 911 GT2 RS’s enormous power output – Porsche claims that the 3.8-litre biturbo flat-six in the back produces 690bhp. It ups the ante considerably on the last generation 911 GT2 RS – previously Porsche’s most potent 911 – by making 79bhp more with its larger engine, borrowed from the 911 Turbo S and tweaked.

690bhp and 750Nm of torque is achieved through a modified turbocharging system, pushing an increased volume of air into the combustion chambers. The turbos are aided by a new and additional water-cooling system which sprays water into the charge-air cooler – this ensures air entering the combustion chambers is at an optimal temperature, even when the car is being driven hard. 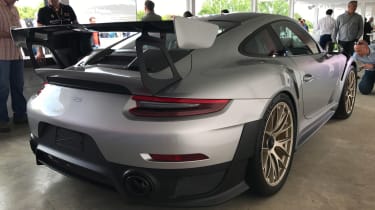 Power is sent to the rear-wheels via a seven-speed PDK gearbox, tuned specifically to meet the huge traction demands placed on the rear wheels. The package is rounded off with a lightweight titanium exhaust system, which Porsche says delivers a raucous soundtrack while saving 7kg compared to the 911 Turbo’s system.

The car’s wild exterior is tailored towards optimal grip and aerodynamic efficiency. It’s hard to miss the huge rear wing at the back, while a pair of brake cooling ducts placed on the bonnet joins massive air intakes on the front bumper. 911 GT3 RS inspired gills are placed on the front wheel arches. 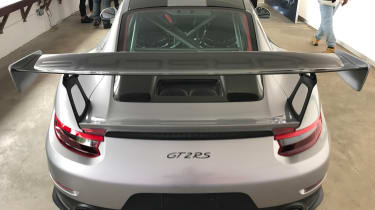 Much of the 911 GT2 RS’s bodywork is constructed out of carbon-fibre reinforced plastic – Porsche names the front wings, front wheel arch vents exterior mirrors, rear air intakes and some of the rear panels as being made from the lightweight material. Elsewhere, the bonnet is carbon-fibre and the standard roof is made of magnesium. Wheels 20-inches in size at the front and 21-inches at the rear are home to standard ceramic composite brakes.

Underpinning it all is a race spec chassis with rear-axle steering, and the tyres are shod with sticky high performance rubber. Drivers can tweak the car’s settings through the on-board Porsche Stability Management system.

Buyers after the ultimate version of Porsche’s ultimate 911 can opt for the Weissach pack. This reduces weight by 30kg, thanks to a carbon roof, anti-roll bars and coupling rods. Magnesium wheels are included too, to reduce unsprung weight. 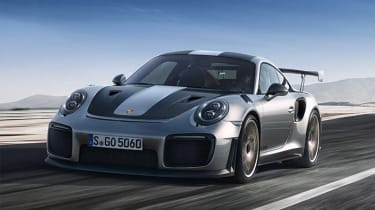 Porsche has gone for a red and black two-tone colour scheme in the cabin, mating red Alcantara with black leather and naked carbon-fibre trim as standard. Full bucket seats and a roll cage are combined with creature comforts in the form of a central infotainment system and Connect Plus features, which link up to the driver’s smartphone for detailed telematics and timing. Porsche’s Chrono package is also available, placing a stopwatch on the dashboard and adding new timing functions to the infotainment setup.