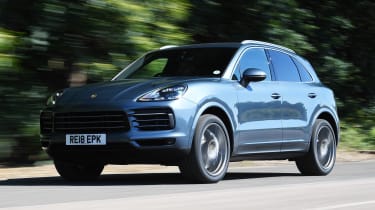 While the new Porsche Cayenne is nothing short of amazing, this S model is the weak link in the line-up – overshadowed by the cheaper, faster, more fuel-efficient e-Hybrid model. However, Porsche has made the Cayenne easier and even more enjoyable to live with on a daily basis, also enhancing its position as the best-driving large SUV you can buy.

The third-generation Porsche Cayenne promises more comfort, better refinement and more tech, as well as an even sharper driving experience – but can it deliver on UK roads?

There are four petrol-powered Cayennes to choose from, spanning the standard 336bhp 3.0-litre V6 through to the range-topping Turbo with its 543bhp V8. In between, you’ll find the 455bhp plug-in e-Hybrid, and this: the 434bhp twin-turbo V6 Cayenne S. 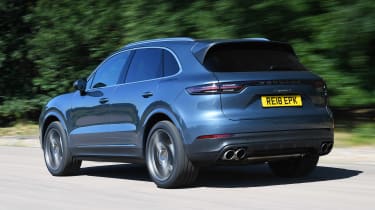 So the S seems like a bit of a pointless model in the range. But how does the rest of the Cayenne stack up? In short: brilliantly. Whereas previous Porsche models have come up short when it comes to ride comfort, the new model is a far more compliant and convincing proposition.

Despite the all-round multi-link suspension, the Cayenne still won’t glide over bumps. This is the sportiest of sports utility vehicles, after all, so you expect a solid connection with the road. But the new 4D chassis control with adaptive air chambers has taken comfort up a notch, so you’ll now arrive at your destination stirred rather than shaken.

In S trim, this is a car that weighs a shade over two tonnes, yet it feels darty and agile from behind the wheel. The steering feels weighty and responsive, and it’s hard to detect any body roll – thanks in part to the Porsche Dynamic Chassis Control electronic roll stabilisation system. All this in spite of the fact the latest Cayenne stands at almost 1.7m tall.

If you spec the Sport Chrono Package you’ll get a dial on the steering wheel to choose between Comfort, Sport, Sport Plus or Individual drive modes, allowing you to personalise the car to your desired settings. A button in the centre will maximise engine performance, too. 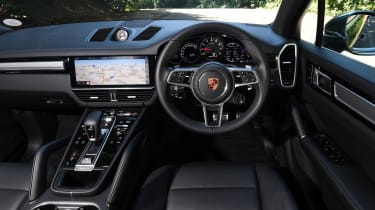 The two turbos do their bit to make the V6 responsive from any revs, while the engine note is just about growly enough to sound interesting. Take things easy, however, and it’s near enough as quiet as any SUV at this price.

Sadly, even at cruising speed we didn’t manage to match the claimed 30.1mpg; low to mid-20s was nearer the norm – further playing into the e-Hybrid’s hands. The high CO2 emissions won’t really affect private buyers, but ensure the S falls further out of favour for company car drivers. 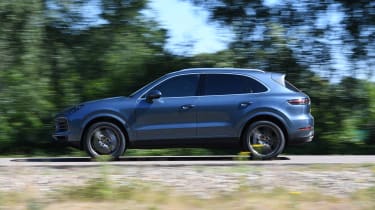 Porsche continues to run Audi close when it comes to interior quality, and the Cayenne is very well put together. The firm has given the cabin a complete tech makeover, too, with a lovely, flush-fitting 12.3-inch HD touchscreen in the centre of the dashboard. In front of the driver sits the usual big, bold, analogue rev counter, but it’s now flanked by two seven-inch full-HD displays.

As is also traditional in a Porsche, there’s a bit of button overload on the centre console, and neither the touchscreen nor the other controls are as easy to use as in rival models. Apple CarPlay is available, which makes life easier, but tough luck if you use a Google-powered phone, as Android Auto isn’t yet supported. Porsche Connect will help you make the most of ownership, though – and probably sell you some more apps, too.

The Cayenne remains the Porsche for families, however. Rivals may be available with seven seats, but by avoiding the idea of a third row, the Cayenne offers decent space for five adults. The boot extends from 770 to 1,710-litres with a flat and wide load entrance, as well.