The Porsche Cayenne E-Hybrid is a genuine performance car rather than just an eco-friendly SUV. With a 0-60mph sprint time of 4.7 seconds and fuel economy around 40mpg in the real world, it has a huge range of ability. And the E-Hybrid makes the V6 S petrol model pretty much obsolete.

The previous Porsche Cayenne E-Hybrid didn’t quite know what it wanted to be. It was neither a full-blown performance model nor an especially talented eco-warrior. But this new generation has a much clearer focus.

It takes a single-turbo V6 petrol engine that produces just under 340bhp, and then links it with a “high-performance” hybrid powertrain to give combined outputs of 455bhp and 700Nm. That’s enough to fire the E-Hybrid Cayenne from 0-60mph in just 4.7 seconds and on to a top speed of 157mph. Impressive stuff, in isolation.

At the same time, however, it can also return close to a claimed 90mpg on the combined fuel economy cycle and it emits just 72g/km of CO2. 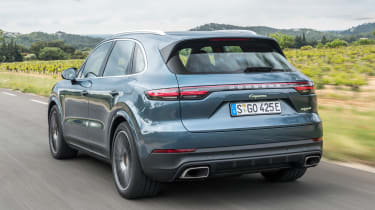 The Cayenne E-Hybrid’s range of abilities is seriously impressive. Apart from anything else it’s just a well-sorted, very rapid SUV that almost defies physics in the way it rides, handles, steers, stops and goes.

There are four driving modes to choose from, ranging from full EV, which has a range of about 25 miles and a top speed of 88mph, up to Sport Plus, in which the maps for the throttle, eight-speed Tiptronic gearbox, exhaust and so forth all go to the max.

In Sport Plus the drivetrain will also enter into its aggressive regeneration mode, in effect using the petrol engine and brakes to regenerate juice for the battery pack when on the move.

By selecting the right modes and pressing the right buttons, then, this Cayenne really can switch from near-silent limousine to a snarling, and very rapid, sporting SUV, and all sorts of different cars in between.

It must be said that the hybrid powertrain adds 300kg. But you get PASM adjustable dampers as standard, and if you add the air suspension, as Porsche had on our test vehicles, then there’s only the smallest of differences between this car and the regular V6 S petrol. The E-Hybrid disguises its weight in a quite astonishing fashion, in fact – and it easily bullies the regular car aside in pretty much every other area. 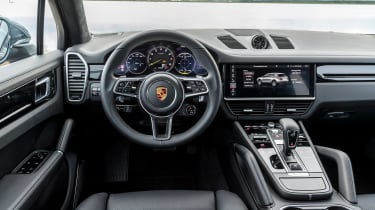 It’s also more appealing inside than before. There’s a better-equipped cabin, with a huge and brilliantly intuitive new touchscreen infotainment centre dominating the centre console, plus, for Porsche, a fine level of standard equipment for your £67,128.

The previous-generation model’s luggage bay was far smaller than that of non-hybrid Cayennes, due to some serious intrusion from the battery pack. Not so this time; the load area is now 645 litres with the seats up and 1,610 litres when they’re down.

It’s an impressive vehicle overall that lays the ground for similar kinds of tech – and the range of dynamic personality this brings – to appear in the next 911. One day, all Porsches will be offered as hybrids, and the world of SUVs and two-door sports cars will be better for it.