The Kadjar is Renault’s first foray into the lucrative mid-size SUV market. Can it take on the best? 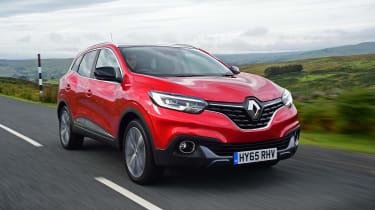 The Kadjar is a very important car for Renault. Sales are good, but a decent crossover is key for any brand wanting to hold its own in a competitive new car market. Luckily, the accomplished Kadjar has it all – from style and quality to practicality and low running costs. We’d save some cash and go for a mid-spec dCi 110 as it’s almost as flexible, loads more comfortable and even cheaper to run. It’s a brilliant all-rounder and we expect to see a lot of these on UK roads in the next 12 months.

Renault is enjoying something of a resurgence here in the UK. Since launching the all-new Clio in 2012, sales have skyrocketed. The brand is currently up 14 per cent year-on-year, and with a new Megane just around the corner, this success looks set to continue.

But there’s still a sizable gap in Renault’s model range – that being the mid-sized SUV. It’s a big gap too, as now more than one in every 10 cars (11 per cent) sold in the UK is a C-segment crossover. So, enter the new Qashqai-based Kadjar. 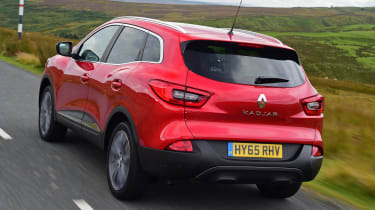 Renault says the new Kadjar shares 60 per cent of its parts with the Sunderland-built Nissan, but 95 per cent of what you see and touch is unique. It’s certainly more striking to look at ­– especially in the Flame Red of our Signature Nav test car.

From launch it’s available with three engines. There’s a turbocharged 1.2-litre petrol, as well as a pair of diesels with either 108bhp or 128bhp. Both the manual and automatic versions of the smaller diesel emit less than 100g/km of CO2, but it’s the more powerful version we were given to sample first. 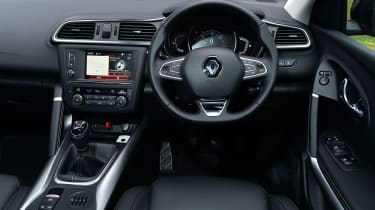 It looks just as good inside as it does outside. It feels much more upmarket than the Nissan Qashqai or even a Mazda CX-5, and despite this being the range-topping Signature Nav, even lesser trims get a dashboard lined with high quality plastics.

Touchpoints are key, and it's pleasing to discover everywhere you lay your hand is soft and well engineered. There’s a premium feel to the buttons and controls throughout the cabin and the heater controls even have a whiff of VW about them, with classy white digits and solid rotary dials. 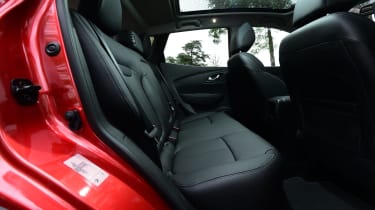 All cars get a digital speedo and all but the entry-level Expression+ benefit from a central touchscreen with built-in sat nav. Top-spec Signature Nav models are particularly lavishly equipped, with heated leather seats, keyless go, dual-zone climate and a BOSE stereo. Outside it gets 19-inch diamond cut alloy wheels, automatic LED headlights, chrome details and a full-length panoramic roof.

Speaking of which, space in the back is decent and full-size adults won’t struggle for room. The glass roof does eat into headroom, but only those well over six feet tall will find their scalp brushing the ceiling. 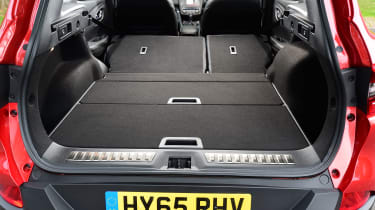 Renault claims a best-in-class boot, too. At 472 litres it surpasses its sister car, the Qashqai, by 42 litres, and trounces the MINI Countryman’s 360 litres by a considerable margin. It even beats the out-going VW Tiguan by two whole litres. You can fold the seats using a button in the boot, revealing an impressive 1,478 litres of load space, and there’s a moveable boot floor on top-spec Dynamique S and Signature models, allowing for a totally flat load bay when the seats are down.

Inside, there’s a pair of decent door bins, a sizeable glovebox and a cubby between the front seats. A pair of (admittedly small) cupholders and a coin tray suffice in the front, while in the rear there’s a handy foldable centre armrest on Signature cars, as well as some pockets in the back of the seats. 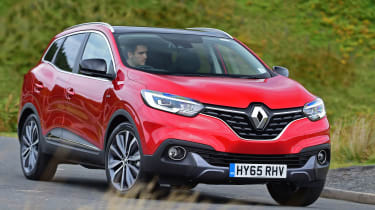 All models feel very grown up, with a high driving position and refined engines. This higher-powered 128bhp car is enormously flexible and rather eager, though the 108bhp model isn’t exactly slow. Plenty of torque means both engines are more than at home on the motorway, and rarely require a change of gear to keep up with faster moving traffic. 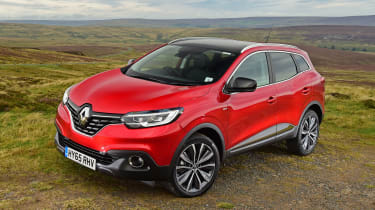 The Kadjar’s biggest issue is its ride. It steers nicely and there’s plenty of grip, but the 19-inch wheels on top-spec cars can crash over potholes – especially around town. There’s a significant amount of tyre roar, too, but at least the suspension is quick to react, doing its best to iron out the worse lumps and bumps.