Mid-range 1.5 dCi model is the pick of the Renault Kadjar line-up in Dynamique S Nav trim 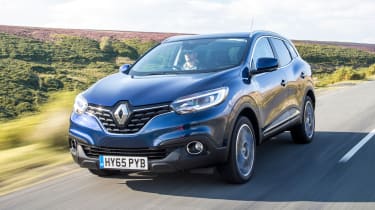 This 1.5 dCi 110 Dynamique S Nav is  the pick of the Renault Kadjar range. Despite its modest power output, it feels sufficiently sprightly, comfortable and refined, while also coming packed with equipment. If you can  do without the LED headlamps, panoramic roof and Bose stereo  of the Signature Nav, this mid- spec version ticks all the boxes.

But if you can’t find almost £25,000 to splash out on a brand new crossover, how does the mid-spec Dynamique S compare, with the smaller 1.5-litre dCi 110 diesel? 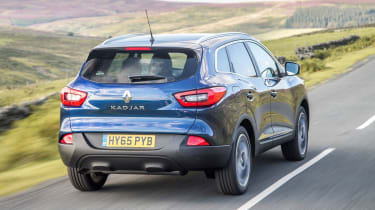 Well, it’s £2,400 cheaper for starters, yet it’s 20bhp and 60Nm down on the 1.6 and misses out on the Bose stereo, panoramic roof and LED headlamps. However, it still comes with an extensive list of kit.

Up front, you’ll find the same well crafted and solidly built dashboard as in the top-spec cars, along with VW-like dual-zone climate controls, automatic lights and wipers and keyless go. It surpasses the two-year-old Nissan Qashqai on which it’s based, feeling easily as upmarket as a Mazda CX-5. Space in the back is good, too - especially without the glass roof of Signature cars – while all Dynamique S Nav models get the same half-leather seats, seven-inch touchscreen and TomTom nav.

The engine feels just as refined and, unless you regularly tow a trailer or caravan, should prove quick enough for most buyers in the market for this kind of car. Granted, it’s not quite as quick in-gear, but it still pulls well on the motorway. It actually feels smoother and less jerky, too, due to the more relaxed and less frantic engine. 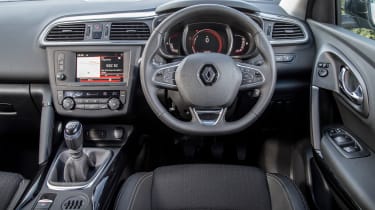 Like the 1.6, this 108bhp 1.5-litre also appears in the Qashqai – and it’s proven the biggest seller for Nissan. It’s easy to see why, as annual road tax costs just £20 and it returns more than 70mpg economy between fills. But the best part is that the Renault is £1,885 cheaper than the Qashqai, yet comes with the same kit.

This, and the fact that the Kadjar is one of the most stylish crossovers on the market, with a nicely styled, high-quality interior, push it towards the top of the class.