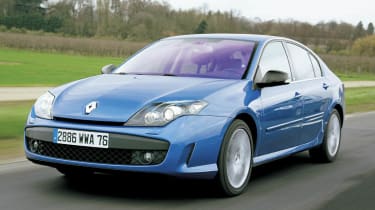 Undoubtedly a valuable addition to the Laguna line-up, the new GT has the chassis technology to put rivals to shame. However, will the bodykit be too much for some buyers to stomach? The firm’s four-wheel-steering system helps to give the car a more agile edge, and in petrol form, the GT’s pace is impressive in any gear. However, the advanced chassis system won’t come into its own until it sees service in a true sports model. Let’s hope Renault will put it to good use in the forthcoming Laguna Coupé.

Renowned for its feisty hot hatches, Renaultsport is responsible for some of the most sought-after performance cars on sale. But have the chassis boffins been able to add a sporty edge to the latest Laguna?

The family car’s Active Drive chassis won us over in the standard Laguna when we drove it recently. Now we’ve tried the GT variant, developed by Renaultsport’s finest.

Though not a fully fledged Renaultsport model, the car gets a beautiful and sporty interior. But the styling will be a major turn-off for many. Even the looks of the standard Laguna are an acquired taste, and with a new front bumper with garish air intakes, the GT has an awkward appearance.

But what about the dynamics? There’s a pair of two 2.0-litre engines – the 201bhp turbocharged petrol unit driven here, or a 176bhp diesel. Opt for the punchy petrol model, and the Laguna’s pace is impressive. There’s plenty of acceleration across the rev range, and the hatchback feels every bit as fast as its 0-62mph time of 7.8 seconds suggests.

However, the Laguna’s trump card is undoubtedly its cutting-edge four-wheel-steer system, which has two modes. At speeds of less than 38mph, the rear wheels turn in the opposite direction to the fronts up to an angle of 3.5 degrees. While this doesn’t sound much, it reduces the turning circle by 10 per cent.

From behind the wheel, this not only makes tight manoeuvres easier, but also reduces the amount of steering lock required for turns. Once you are above 38mph, the system changes to help improve handling and steering feel. At out-of-town speeds, the rear wheels both turn at the same time in the same direction as the fronts. The result is much more agility than the standard car can offer, helping the Laguna to cope with mid-corner bumps.

Prices are yet to be confirmed, but the petrol variant is likely to cost around £21,000. While it’s undoubtedly the best Laguna in the line-up for the keen driver, it still can’t match the razor-sharp cornering skills of its smaller hatchback brothers.