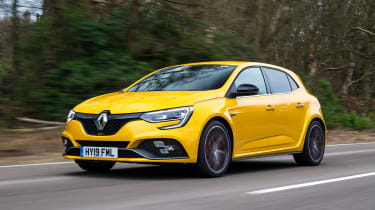 If you’re after the ultimate hot hatchback, it’s still hard to look beyond the Honda Civic Type R. However, where the Civic has extrusions all over its bodywork, the Renault has purposeful curves – so for those who favour this more subtle approach, Renaultsport’s latest effort will make a very fine choice indeed. And, as an added incentive, it’s more affordable, too.

The latest Renaultsport Megane Trophy has some big boots to fill – because the badge has adorned some of the fastest and most involving creations ever to come out of Renault’s performance division. Now we’ve had a chance to see how it fares in the UK.

To recap, the Trophy gets a revised version of the Renaultsport Megane’s 1.8-litre four-cylinder turbocharged engine, with 296bhp and an extra 10Nm of torque, at 400Nm (or 420Nm with the twin-clutch box instead of the standard six-speed manual).

The car also features the Cup chassis option (suspension tweaks and a limited-slip differential) from the regular model, and throws in different front brakes that are designed to resist fade more effectively, and an exclusive design of 19-inch alloy wheels. 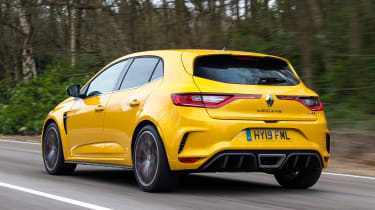 The reality beyond the numbers is more complex – but still compelling. In truth, the Megane does not feel rocket-ship fast in a straight line in the same way a Honda Civic Type R does. There’s a teeny bit of lag as the engine spools up to just over 1,500rpm, and then a strong surge of mid-range punch.

It feels faster than the regular car, mind you, and the revised exhaust sounds good, with a bit more aggression to its note and satisfying pops when you lift off the throttle. 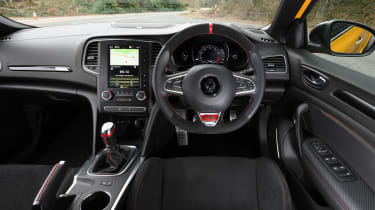 But it’s the handling that sets the Megane apart from most other hot hatches. The mixture of that limited-slip differential and a rear-wheel steering system makes it incredibly agile and quick to respond to inputs; the nose is keen to dip into the apex of corners, and while there is some torque steer if you stand on the throttle exiting a curve, it’s well contained.

The steering has a pleasing weight to it, although it would be an overstatement to say it’s brimming with feedback. And we still prefer the manual gearbox to the dual-clutch auto. Renault’s six-speeder may not be as slick as Honda’s, but if you’re positive enough, it still delivers more satisfaction than paddles ever could.

The trade-off for the agility and body control is a ride that is just about on the acceptable side of firm. Tyre roar may also prove an issue if you’re planning to use the Trophy on the motorway every day.

Inside, it’s typical Megane fare – roomy enough for most uses, and nicely finished in many (but not all) of the key areas.

There are just a few sporting add-ons: a switch to control the driving modes, the odd Renaultsport logo and aluminium pedals. It seems strange, too, that the tasty Alcantara-trimmed Recaro seats are optional even on this ‘ultimate’ sporting Megane, although if you choose them (and you should), you get to sit about 20mm lower than you would in the regular car, bringing you that teeny bit closer to what’s going on beneath you.