Despite a recent facelift, the Renault Megane is now starting to feel somewhat outclassed by the best family hatchbacks 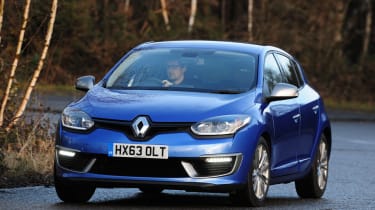 The Megane is a family-sized hatchback designed to rival established models like the Ford Focus and Volkswagen Golf. The current model has been in production for six years, and benefits from a mid-life facelift, but the new model is on its way later this year offering myriad improvements including a better-quality cabin and updated driving dynamics.

All versions are well-equipped, with alloy wheels, Bluetooth phone connection and air-conditioning featuring on all models. Dynamique models add TomTom sat-nav, parking sensors and climate control, while the GT benefits from all this kit, plus a reversing camera and a sporty looking bodykit.

Mechanically the car remains largely unchanged, although Renault has trimmed down the engine line-up. In terms of petrol engines there’s a choice of 1.6-litre petrol and 1.2-litre TCe turbo, plus a 217 bhp 2.0-litre turbo. Diesel fans can choose between the frugal 1.5-litre and 1.6-litre dCi units, both of which are available with frugal stop-start equipment.

At the top of the range is the brilliant Renaultsport model, which still sets the standard for driving fun. Powered by 261bhp 2.0-litre turbo petrol, it claims a scorching 6.0 seconds to 60, while its uprated chassis delivers incredibly agile handling. The 275 Trophy and stripped-out Trophy R provide even more power and an even greater focus on driving thrills.

As with all models in the Renault range, the Megane benefits from the firm’s 4+ aftersales scheme, which includes a four-year warranty and roadside assistance package. Buy the Megane using Renault’s Selection finance plan and you’ll also benefit from free servicing for four years.

Renault's Renaultsport Clio and Megane RS models have cemented the French manufacturer's reputation for building great handling hatchbacks. Thankfully, some of that DNA has filtered through to this standard Megane hatch. 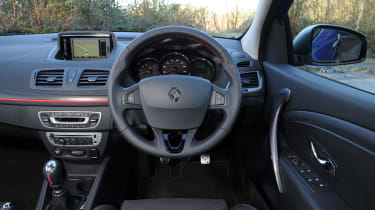 That means you benefit from a sharp turn-in a neutral balance, which helps give you confidence to attack twisty roads. It’s not perfect, though. For starters the steering lacks feedback, while the Renault relies heavily on its electronic stability control to keep things in check, and it never feels as composed as some of its rivals.

The car’s agility also comes at the expense of comfort, as the Megane feels a little unsettled at speed, and around town it crashes into potholes, especially when fitted with larger diameter alloy wheels.

As part of the recent facelift Renault has rationlized the engine line-up. As a result, standard models are only available with the aging 1.6-litre petrol and a punchy 1.2-litre TCe petrol, plus the option of 1.5-litre and 1.6-litre dCi diesels.

The 1.6-litre petrol is best avoided, as it is both less powerful and more costly to run than the smooth 1.2-litre TCe turbo. Both the dCi diesel engines are keen performers, and what they ultimately lack in refinement they make up for with low running costs.

However, drivers seeking the ultimate in driver thrills should seek out the Renaultsport models. The standard 261bhp 2.0-litre turbo 265 model is fast, agile and hugely entertaining, while the optional Cup Pack adds stiffer suspension and a limited slip differential for an even more focused driving experience. Buyers who want even greater thrills can opt for 275 Trophy that features a 10bhp power boost, lightweight exhaust and even firmer suspension.

For those who want some excitement but can't make do with the compromises the full-fat Renaultsport models, Renault has introdcued new GT 220 model which feature a Renaultsport chassis and engine but a softer and more practical setup especially in Sports Tourer form.

The 110bhp 1.6-litre petrol engine in the Renault Megane range needs to be worked hard to get the best out of it, and it only achieves 40.9mpg with 159g/km CO2 emissions.

1.2-litre petrol and dCi diesel engines are available with Renault's fuel saving ENERGY tech and a stop-start system. The petrol variant with 115bhp emits 119g/km of CO2 and returns 53.3mpg. If you want to keep your costs in check, then the 109bhp 1.5 dCi diesel is worth considering, as it claims an impressive 80.7mpg and 90g/km of CO2.

Perhaps the best blend of performance and economy is offered by the 128bhp 1.6-litre dCi, which promises to return 70.6mpg with CO2 emissions of 104g/km.

Before buying, it's worth considering that the Megane loses its value quickly, so steep depreciation means the Megane will be worth less than the cheaper SEAT Leon after three years. On the plus side, Renault’s 4+ aftersales package includes four years warranty, plus the possibility of free servicing for the same period.

While Renault revised the Megane's styling with a revised nose treatment and tidied up the amount of trim levels in the range, there's not really much that separates it from the old model. This is a shame, considering it's a popular choice amongst UK buyers.

The facelifted Megane's nose takes inspiration from the Clio launched last year, so it features a big Renault badge, a bow-tie grille and large headlights. A large intake grille under the bumper completes the stylish look. Given that the Megane was originally designed with a smooth front end, Renault’s has integrated the bolder new look well.

However, the rest of the Megane’s rounded shape remains virtually unchanged. It does benefit from some new alloy wheel designs, but it keeps the same side profile and rounded rear as the old car, plus the tail-lights are carried over too.

As with the exterior, it’s clear that Renault has gone for evolution rather than revolution with the Megane's interior. The dash layout remains much the same as it was before, albeit with a new flash of trim across the dash and a larger sat-nav screen. More importantly, the previously confusing radio controls have been redesigned to deliver a more user-friendly layout.

The mix of digital and analogue dials is the same as before, as are the audio and climate controls. On the plus side, the materials used throughout the interior have a quality look and feel, plus the switchgear operates with precision. Even so, the cabin doesn’t feel as solidly built as rivals’ such as the VW Golf and SEAT Leon.

As with rivals, the Megane is available in range of bodystyles. The standard car is a traditional five-door hatchback, plus there’s a sleek three-door coupe and versatile Sport Tourer estate.

Boot space is a trump card for the Renault Megane, and it's possible to fold the rear seats all the way forward. This means you get an almost complete flay load bay, while the boot space extends from a healthy 405 litres to 1,129 litres. The boot's square shape also makes it very usable.

If you need more boot space, then the Sport Tourer should be on your shopping list. With the rear seats in place there’s a generous 486-litre of capacity, while folding the rear bench flat increases the available space to 1,600-litres. Furthermore, there’s the option to add a fold flat front passenger seat that allows you to accommodate extra long loads.

Despite its spacious boot, rear passenger space in the Megane is nothing to shout about, and the rear bench isn't particularly comfortable - it feels more like you're perching rather than sitting on it.

If you look closely, storage in the Megane is nothing special, either. There is only an open bin and a 12V socket for rear occupants, while front passengers are faced with a narrow centre console that’s taken up by the multimedia controller and a single cup-holder.

However, it's very easy to achieve a comfortable driving position in the Renault Megane, thanks to the adjustable driver’s seat and reach and rake adjustment of the steering wheel. What’s more, the driver’s position feels nice and sporty.

Considering this is the third generation of the popular Megane, it wouldn't be unreasonable to expect that Renault would have ironed out most reliability issues.

However, the Megane ranked only 92nd out of 150 cars in our 2014 Driver Power customer satisfaction survey, meaning it was thoroughly battered by the likes of the Golf. On the plus side, Renault finished a respectable 15th overall in the manufacturer rankings.

The Megane has a five-star Euro NCAP score, but it was tested back in 2008. Its newer rivals have earned five stars under tougher test conditions. Because it’s based on older technology, the hatch doesn’t provide tech such as city safety or lane keeping aids. Tyre pressure monitors (standard on the SEAT Leon) aren’t offered at all. You’ll also have to go without kit such as lane keep assist, low speed collision avoidance and blind spot monitoring.