SEAT’s reliability reputation could be better, but there are no concerns over the Alhambra’s safety 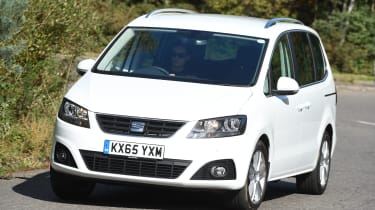 Since its launch in 2010, the Alhambra has sold in low numbers, so it hasn’t appeared in our Driver Power surveys. Unfortunately, SEAT’s dealers don’t have a great reputation, though, and have consistently placed in the lower half of the Driver Power dealer survey. That's a shame when you consider sister firm Skoda is a consistent high flyer in the same polls.

The Alhambra earned a five-star Euro NCAP rating, but this was back in 2010 and since then a more stringent test regime was introduced. However, that doesn’t mean the SEAT can be considered unsafe by any means, as back in 2010 the car recorded an excellent 96 per cent rating for Adult Occupant safety, and 80 per cent for Child Occupants. It features the usual raft of kit too, including seven airbags, driver-operated electric child locks on the sliding doors and three Isofix child seat mounts on the middle row. Safety options include a pair of integrated child seats (around £450), while specifying the multifunction camera (about £550) adds lane assist and traffic sign recognition.

The standard SEAT warranty applies to the Alhambra, which means three years cover with a 60,000 mileage cap in year three, but unlimited mileage in years one and two. You can spend around £400 extra to get four years/75,000 miles, or around £700 for five years/90,000 miles.

SEAT servicing costs are competitive across the board, and you can take out a fixed-price plan for three-years/30,000 miles of routine maintenance for around £20 per month. You can even bundle it in with any finance package you're thinking of taking out. It doesn’t cover consumable items like brake pads or tyres, although as this is a big, heavy MPV, you'll find these will need changing faster and cost more to replace when they do wear out.