SEAT's compact MPV is the first to receive VAG group's new heart, but does it pack a punch? 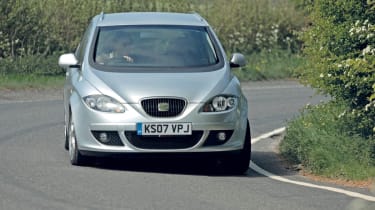 Using the VW Group’s latest technology, the 1.8 TSI is set for a long life. It performs well in the bulky Altea XL, and we can’t wait to see smaller, lighter models exploit the torquey, silky-smooth unit. Economy is average, but the powerplant’s impressive road manners make it a real treat to use.

If you have driven a petrol-powered VW Group car in the past 10 years, chances are it had a 1.8T engine. The punchy unit saw service in everything from Skoda’s Octavia to the Audi TT – and now, there’s another 1.8 aiming to achieve similar success.

One of the first models to receive the new 1.8 TSI is the SEAT Altea XL compact MPV. However, rather than being a larger version of VW’s turbo and supercharged 1.4-litre unit, this new engine is based on the 2.0-litre turbo-only powerplant found in the Golf GTI. It produces 157bhp and 250Nm of torque – that’s only 30Nm less than the VW hot hatch.

This provides the engine with diesel-like muscle. Even at 1,000rpm, it dev­elops 165Nm, giving virtually lag-free surge. Yet unlike with an oil-burner, you don’t have to change up, because the thrust continues right round to the near-7,000rpm rev limit. It’s remarkably smooth, too, with barely any vibration disturbing the cabin.

At higher speeds, the sheer bulk of the Altea XL takes the edge off the TSI’s delivery. The switch-like response to the throttle is almost too eager at lower speeds, too, which makes for jerky progress in traffic. Fuel economy could also be an issue. SEAT claims 36.7mpg, but we weren’t able to get close to that in the car we drove. At least the direct-injection unit doesn’t have to be run on super unleaded, while CO2 emissions are competitive.

The Altea XL is the first in a long line of models to get 1.8 TSI power. Next year, we’ll see the engine in the Audi A5, TT and new A4, plus VW’s Golf, Passat and the new Scirocco. And that’s only the start...

Rival: Renault Grand Scenic The Altea XL TSI makes the £16,495 Scenic seem out of date – its 1.6-litre engine can’t match the new 1.8. The Renault is nearly 50bhp down, and more than three seconds behind the SEAT from 0-60mph.