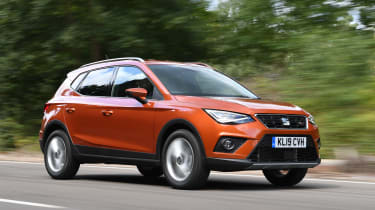 It's an SUV, but the SEAT Arona is still geared towards efficiency. The petrol engines emit no more than 114g/km of CO2, including those models with a dual-clutch automatic transmission.

The change to WLTP emissions and economy testing has impacted the Arona's official economy figures, with the diesel offering emissions of 108g/km for the manual and 109g/km for the auto version. This means company car users have more to think about when it comes to the tax benefits of choosing petrol or diesel power.

SEAT has taken a novel approach to the Arona’s line-up, eschewing the traditional ‘entry-level’ edition which offers a low price, but a basic spec that few customers ultimately choose. As such, the whole Arona range is predicted to have strong residual values; and, with available deposit contributions on finance deals, the car should be at the sharper end of the class on monthly rates. 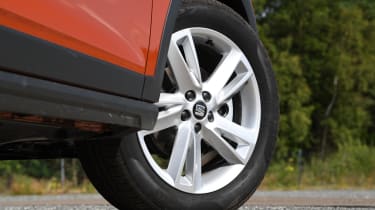 Although based on the Ibiza, the group rating for the SUV is higher, because while both cars share a lot of security and safety features, the Arona is being pitched at a slightly higher price point. That said, with every Arona sitting between groups 8 and 18, it's on a par with its rivals from Citroen and Hyundai.

SEAT used to have a poor reputation for depreciation, but several key models in the past few years - including the Leon, Ibiza and, in particular, the Ateca SUV - have firmed up the company’s performance in this area. The Arona is one of the more expensive contenders in the small SUV class, but our experts predict that it’ll also hold on to more money than most, with expected residual values in the region of 42-48 per cent.

One good point about the Arona line-up is that there’s no ‘entry-level’ version with a low list price but next to no standard equipment. This type of vehicle tends to suffer a sharp fall in resale value, but since SEAT has avoided it, pretty much any Arona should have appeal after the usual two, three or four-year period.