It may look similar, but it's what's under the skin that makes the real difference to the facelifted SEAT Ibiza 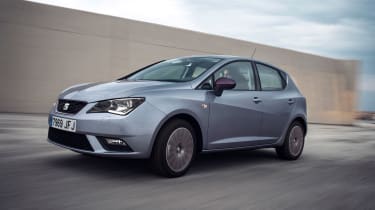 Although on the surface it may not appear as if SEAT has made many changes to the Ibiza, look a little deeper and you’ll find a more accomplished supermini. It never had an image problem to begin with, but welcome changes under the bonnet and inside make it a far more appealing car to spend time with, while minor tweaks to the suspension and steering have sharpened its responses. It’s also better value than most of its rivals - which is key in such a busy market.

While SEAT is busy readying a raft of new SUVs, the Spanish car firm hasn’t forgotten about its most decorated model. Fresh from celebrating its 30th anniversary and notching up over five million global sales, the current fourth-generation Ibiza has been treated to a mid-life refresh.

Even after the arrival of fresh faced rivals such as the Mazda 2 and new Vauxhall Corsa, the current model has never been lacking in showroom appeal – hence exterior tinkering has been left to a minimum. SE spec models and above now receive new LED daytime running lights, while the growing trend for evermore customisation options has prompted SEAT into adding a whole host of personalisation features across the range. 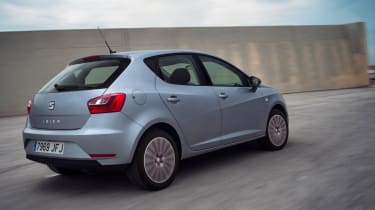 While the sharp-suited supermini didn’t show its age from the outside, the cabin of the outgoing model told a different story. Being part of the VW Group, build quality wasn’t an issue but a sea of dark plastic, shabby-looking materials and lack of up-to-date infotainment system were at odds with the clean cut and modern exterior.

Thankfully, SEAT has addressed this, replacing the dull plastics and dated design with softer materials and a familiar but functional digital display. Our SE spec test car seems to be the sweet spot in the range, with air conditioning as standard and the new infotainment system ­– compatible with Apple CarPlay as well as Android MirrorLink – available for just £150 (it's standard on the CONNECT model). Throw in a softer and sportier steering wheel and new instrument cluster and the Ibiza feels like somewhere you wouldn’t mind spending extended periods of time. 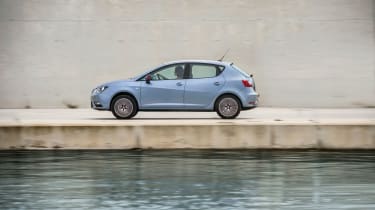 And that’s just as well, because the Ibiza remains a perfectly pleasant car to drive. The Ibiza has always sat at the sportier end of the supermini market, not quite treading on the toes of the chuckable Fiesta but far more entertaining than a Corsa and even the Polo. This updated version has seen tweaks to the electric steering to make it sharper, while re-tuned spring and dampers have taken the edge off the slightly firm ride.

It covers ground with more poise than the previous model but can’t quite match the Polo when it comes to a more mature driving experience, squirming ever so slightly over broken city streets. The steering still lacks the directness of the Fiestas, but it has a solid weight with enough feel through your fingertips to let you know what’s going on beneath you. 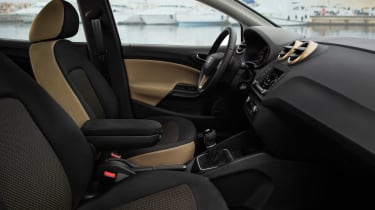 The more polished character is being pushed along by a new power source, too. A brand new range of engines made up of punchy 1.0-litre three-cylinder naturally aspirated and turbo motors as well as new three-cylinder diesels promising in excess of 80mpg have been added to the range. We tried the eco-based 94bhp 1.0-litre turbo version paired with a five-speed manual gearbox – the same powertrain used in the Polo Bluemotion – and found that economy of 68.9mpg doesn’t come at the expense of enjoyment.

The new three-cylinder breathes a new lease of life into Ibiza in terms of performance, with its inherently nippy and lively character. It can prove to be a little hesitant at the lower end of the rev range and it pulls willingly, with the snappy five-speed gearbox making progress far smoother than before. Better still, this is the only petrol-powered Ibiza to dip beneath the 100g/km barrier with CO2 emissions of 94g/km, and over the mechanically identical VW Polo comes it comes with a considerable £1,600 saving.