Final report: Is the supermini the perfect first car? We get a teenager's verdict as it leaves the fleet... 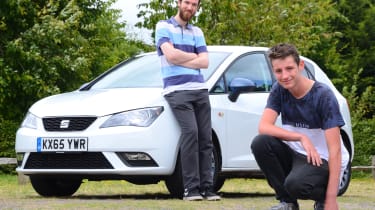 The sharp looks and on-board tech in Connect trim make the Ibiza a great first car – but it’s still pricey for young motorists. A city car like the SEAT Mii might be a more cost-effective choice for new drivers, then, but the Ibiza has still served us well. We just can’t help feeling that there are better cars for the money in this class.

Our SEAT Ibiza is leaving the Auto Express fleet with nine months of service under its belt. In that time, it’s served me well, whether it was on the commute to work, going shopping or meeting up with friends.

Those things are exactly what you’d expect of a supermini like the Ibiza, especially as this updated model appeals to younger buyers with its extensive customisation options. But to find out just how good it isas a first car, I took my cousin Luke, who’s just passed his driving test, for a spin.

First impressions were good, with Luke complimenting the car’s styling. “I like the aggressive-looking headlights and the creases down the sides of the car,” he said. “I prefer a squarer look, though, like the VW Polo.” Round one to the Ibiza’s rivals, then. 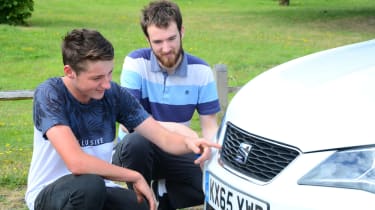 Hopping inside, Luke told me that the interior “has a high-quality and solid feel”, but the best feature was definitely Apple CarPlay (Android Auto is also included). As an iPhone user, Luke was impressed by the system, as he already uses his phone for music and sat-nav, and the in-car system in the Ibiza means it’s even easier to operate.

“It’s something a lot of people my age will really like,” explained Luke, adding that “the steering wheel controls are great, too – they mean you don’t have to take your hands off the wheel or eyes off the road”. I’ve praised the infotainment system before, so I was glad to hear that Luke liked it, too.

It wasn’t all positive feedback, though. Sitting in the back, Luke told me that “the seating position feels too high”, and that his mates wouldn’t be too happy squeezed back there. Some of his friends’ superminis have similar legroom but don’t feel as tight inside, including Luke’s own VW Polo. 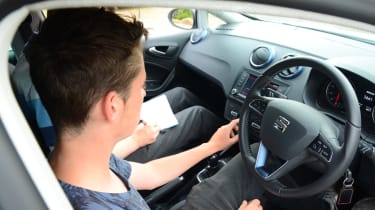 That wouldn’t be enough to put him off, though, and with road tax costing just £30 a year and fuel economy of 46.3mpg, its running costs are low enough to appeal to young buyers on a budget. However, price is still an issue for 17-year-olds like Luke.

“At my age, it would be a strain. You’d have to be loaded to afford this,” he said bluntly, referring to the £14,700 list price – then I told him that our car was fitted with options bringing the total up to £16,030.We got a number of fully comprehensive insurance quotes for Luke on the Ibiza, ranging from £1,540 up to an incredible £8,470. The least expensive quote without a telematics ‘black box’ was £3,460, while the cheapest with one was still £150 a month.

With a deposit of £1,450, he’d be paying around £190 a month for the SEAT on finance, so add that to the insurance premium, and even the Ibiza would be out of reach for many young motorists like him.

SEAT Ibiza supermini is impressive, but loading big items is a fine art 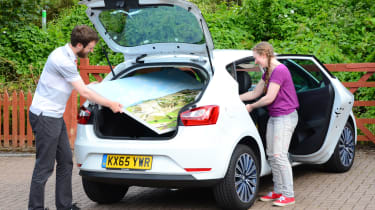 Our SEAT Ibiza has had a generally quiet life here at Auto Express, mainly being used for carrying people rather than cargo. So we threw it in at the deep end on a recent trip to deliver one of my other half’s huge landscape paintings.

Small cars like this aren’t usually bought on their ability to carry large items, but it’s a problem they occasionally have to face, whether that’s paintings, furniture or bicycles. So, did the little Spanish supermini manage to swallow the super-sized scene?

As you can see, it was a bit of a struggle to get the giant canvas in, as the Ibiza’s boot opening is quite small. We had to pull it through the side door, taking care not to smudge the painting on the sides – but it did fit in eventually. Anyone who’s owned a supermini will know the feeling of satisfaction you get from squeezing in something that’s probably slightly too big, and the SEAT managed to pass that test.

While it worked well enough for the wide yet thin painting, it did shine a light on a practicality flaw. Even though you can fold the rear seats down, you’ll need to have your driving position set forward for the seats to drop significantly. With a tall driver like me, the angle barely adds any extra space.

The boot measures 292 litres with the rear seats up and 847 litres with them down, which is slightly less than in a Ford Fiesta and VW Polo. Still, it’s not far off, and the more stylish body shape is part of the SEAT’s charm. Our five-door model is clearly more practical than the three-door SC version, and the extra access was a welcome addition.

There’s not a huge amount of space for passengers in the back, although we’ve managed to squeeze three adults across the rear bench. It’s not ideal for long trips, especially for the poor person sitting behind the driver, but short journeys are fine. 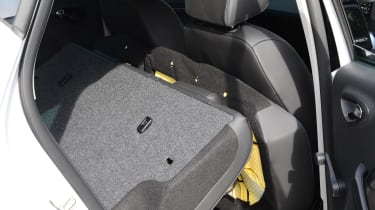 Unfortunately, it’s the same story in the driver’s seat. While the SEAT is reasonably refined on the motorway, the ride is on the firm side. The main reason for this discomfort is the seats. I’ve found it hard to find a decent position in the Ibiza, as the steering wheel feels too far away.

Our car has a 1.2-litre petrol, which continues to impress as we spend more time with it. Despite only having 89bhp, the engine is punchy enough, even with a full car; when it’s just me, it feels peppy. The Ibiza is great fun to drive short distances, thanks to its low-down torque and lively engine note. 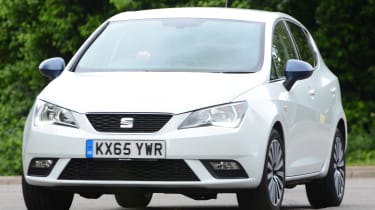 Another aspect of the SEAT that’s become more apparent over our time with the car is just how well designed the media system is on our Connect model. We drive a lot of different cars each week, but few systems on the market are as easy to use – even those in upmarket models.

You flick two buttons on the steering wheel to toggle between radio stations, plus you can pair your smartphone and access music via the touchscreen. These are small details, but things that can make all the difference. It’s just like the awkward boot; it’s a minor problem until you’ve got a huge work of art to fit in the back. 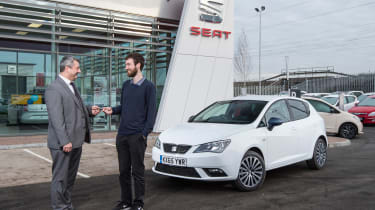 The Ibiza has always been SEAT’s core model – it was the first car brought to the UK by the brand, back in 1984, and has proven a strong seller ever since. Over the coming months of testing, we want to find out if the latest supermini has what it takes to beat rivals like the Ford Fiesta and Mazda 2 in a very competitive market.

We headed up to Motorvogue Bedford to collect our car and were greeted by sales controller Darren Dennison. “Young people love the Ibiza,” he told me. “They like its looks and the smartphone connectivity, too.”

You can see why younger drivers would love it – our car’s white paintjob looks cool and modern, while SEAT’s signature light and grille design gives it an edge over its Volkswagen Polo and Skoda Fabia cousins when it comes to sporty styling. 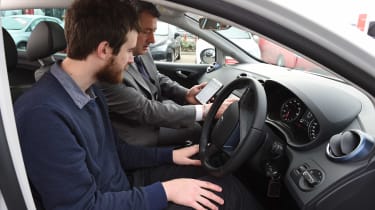 This is the Connect model, which gets Apple CarPlay and sat-nav as standard. The previous Ibiza had its screen stuck in a cheap-looking, dash-mounted cradle, but this updated version offers an integrated system, which is easy to use and features crisp graphics. It took just seconds to enter the address for our central London offices, then Darren showed us how to sync our phone to the system, and we were away, listening to our music and following the simple instructions that appear in between the instrument dials. Traffic alerts made sure we remained on schedule, too.

The journey back along the motorway, and then through town, gave us the chance to see how this latest Ibiza drives – and it impressed on both counts. It’s moderately quiet at speed and feels at home cruising at 70mph. In traffic, the small size means you can nip into gaps when needed, too. 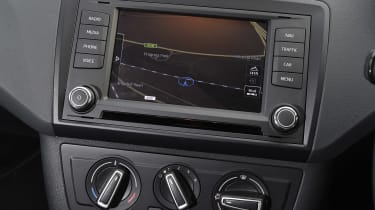 The engine produces just 89bhp, but thanks to an impressive 160Nm of torque at just 1,400rpm, it feels quicker than the stats suggest. It’s good for driving in town, although on the motorway, you still need to plan your overtakes carefully. It runs out of puff at higher revs, which can be disappointing when you finally make it out of the traffic jams and on to a quiet B-road.

That said, it’s smooth and eager, plus the five-speed gearbox benefits from a slick action, giving easy access to all the available power. Unfortunately, the Ibiza isn’t quite as good to drive as the Fiesta or Mazda, but it’s still very composed, just like the Polo it’s based on. The steering is well weighted and there’s plenty of grip, although it lacks the fun factor of its rivals.

One of the key benefits of the car is its running costs, with road tax setting you back only £30 a year. And while we haven’t yet had the chance to run a representative check on fuel consumption, SEAT’s claim of 57.6mpg means we shouldn’t have to make too many trips to the petrol station. 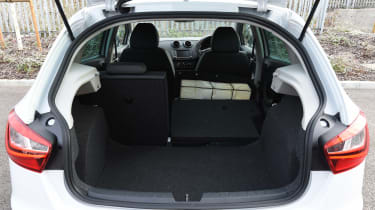 And then there’s the price. At £14,620, the Ibiza looks decent value for a car that packs many desirable features, such as sat-nav, alloys, air-con and a leather-trimmed steering wheel. Oh, and a Samsung Galaxy A3 mobile phone – yes, really.

We’ve also opted for the £150 Blue Pack that adds coloured accents to the wheels, door mirror housings and grille surround, plus the £230 Convenience pack that brings useful extras such as automatic lights.

We’re looking forward to putting the little SEAT through its paces on our fleet, as it’s left such a good first impression. With last month’s frozen temperatures and more bad weather guaranteed before winter’s out, we just hope we won’t have to spend too much time in the cold with a bucket and sponge keeping the white paint clean...