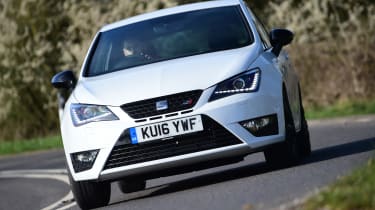 SEAT has a strong track record when it comes to building scorching hot hatchbacks, and the new Ibiza Cupra is aiming to build on that success. Its Leon Cupra has scooped the Best Hot Hatch award two years in a row at our New Car Awards, having seen off talented rivals in the form of the Ford Fiesta ST and Volkswagen Golf GTI.

However, every time the brand has tried to apply its performance-car treatment to its supermini-sized Ibiza, the results have been lacklustre. But now there’s a new Ibiza Cupra model on sale; it boasts a more powerful 1.8-litre turbocharged engine that replaces the old 1.4-litre turbo and supercharged unit, and it delivers greater performance and improves efficiency in the process.

The fourth-generation SEAT Ibiza has been on sale since 2008, and it’s offered in three body styles. There’s a five-door hatch, the three-door Sport Coupé (SC) and an ST estate, although the flagship Cupra only comes as a three-door SC. 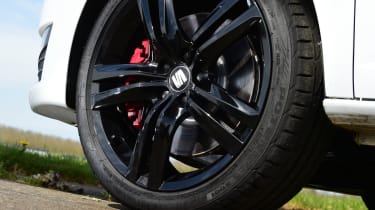 As with other models in the three-door SC line-up, the Cupra has been given a fresher look, an uprated interior and a number of efficiency-boosting mechanical tweaks for 2016. But it's under the bonnet where the biggest changes have been made. Gone is the old Cupra's 178bhp 1.4 TSI turbo and supercharged engine and seven-speed DSG twin-clutch gearbox, replaced by a 1.8 TSI turbo (lifted from the VW Polo GTI) and a six-speed manual gearbox.

Lowered and stiffened suspension combines with a clever electronic differential for sharper handling. The SEAT Ibiza SC Cupra doesn't have the attractive price of the Ford Fiesta ST, but it is well equipped and undercuts the VW Polo GTI by a significant margin, even though both cars use the same platform and running gear.

The SEAT Ibiza Cupra isn't quite as fun to drive as a Ford Fiesta ST, and doesn't feel quite as upmarket as a VW Polo GTI, but it offers a great compromise that puts it somewhere between the two. There’s enough practicality on offer to make the Cupra usable day-to-day, while its breadth of talent means it has a comfortable ride, effervescent personality and sharp agility that will help put a smile on your face.

With reasonable running costs and a five-star safety rating, the hottest SEAT supermini is a terrific all-round choice for sporty drivers looking for an affordable but entertaining drive.

More fun than a Polo GTI on a twisty back road, but not as engaging as the Fiesta ST

Quick steering and plenty of grip allow you to place the SEAT Ibiza Cupra accurately, and the car is pointy and agile. It feels like you can lean on the front tyres and carry plenty of speed in corners. Push the Drive mode button, and the dampers tighten up, giving an even more direct feel to the way the Ibiza drives as well as better-controlled roll in corners.

SEAT previously offered the Ibiza Cupra with a DSG automatic box only, but the six-speed manual is now the sole gearbox choice. It shows the company’s intent to deliver a sportier drive, and there’s no doubt that it involves you more in the experience of extracting speed from the chassis and powertrain.

However, the Cupra lacks the final layer of driver involvement and back-road composure that mark out the Ford Fiesta ST.

The switchable drive modes are similar to those found in the VW Polo GTI, but while the SEAT feels stiff in Sport mode, it’s also more comfortable than the VW in Normal, so the Ibiza has a wider spread of ability. 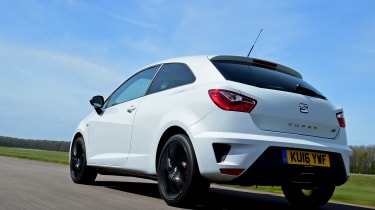 Still, the Cupra provides more fun than its Polo GTI sibling. With its extra grip and XDS electronic diff, the Ibiza puts its power down better than the Polo coming out of bends. These differences are small, and the cars feel very similar to drive when you’re not asking for maximum performance. Yet while there’s little to split the two in a straight line, the Ibiza offers more fun on a twisting country road.

The Ibiza Cupra's new 1.8-litre turbo delivers 12bhp more than its predecessor’s turbocharged and supercharged 1.4-litre, but more importantly, torque has been boosted by 70Nm to 320Nm. The new unit’s 189bhp output is good enough for a claimed 0-62mph time of 6.7 seconds, although we managed a 0-60mph time of 6.4 seconds on test.

The SEAT’s in-gear performance is impressive, too, and on full throttle, the Cupra’s sports exhaust emits a nice fruity whistle. The engine note in Sport mode provides a fitting soundtrack to the pace on offer – even if it’s artificially pumped into the cabin.

The new engine revs to nearly 7,000rpm, but it doesn’t build up towards the red line. Instead, it runs out of steam at 5,500rpm. It’s better to shift up to access the extra torque using the light but sweet manual.

Ibiza Cupra is cheaper than the Polo GTI, but running costs will be similar

The Ibiza shouldn’t cost the earth to run, despite its scorching performance. Stop-start technology helps the car emit 145g/km of CO2, but the similarly equipped VW Polo GTI is even lower, at 139g/km for the manual version.

Road tax will cost £145 per year, while claimed fuel economy of 45.6mpg lags a little behind the claimed 47.1mpg of the similarly powered Polo GTI. This was reflected in our real-world tests, where we returned 34.3mpg in the Ibiza Cupra, which was 2.6mpg less than a manual Polo GTI on a similar test route.

The Ford Fiesta beats both for claimed economy at least, with a combined cycle figure of an impressive 47.9mpg. 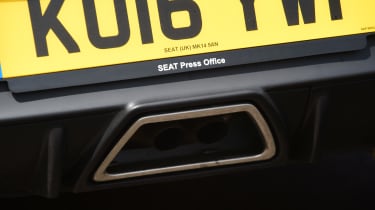 While general servicing and maintenance costs for the SEAT Ibiza Cupra should be competitive, don’t forget the extra expense of consumable items such as brakes, clutch and tyres which will wear out more rapidly the harder you drive – especially if you’re tempted out on a track day.

The SEAT Ibiza Cupra’s group 29 insurance is competitive for the hot supermini sector. Ford’s Fiesta ST is just one group higher, while the Mini Cooper S is in group 28.

The Ibiza Cupra’s predicted residual value of 40 per cent after three years is only slightly worse than what is achieved by the more expensive Clio Renaultsport, but the Polo GTI edges ahead again, with a 47 per cent rating. The Fiesta ST is also expected to do better than the SEAT, and should achieve 45 per cent of its new price over the same three-year/36,000-mile measure.

Sharp looks back up the Cupra's racy performance, although the Ibiza range is knocking on a bit

SEAT’s latest models feature sharp styling that helps them stand out from their VW Group siblings. The Ibiza was one of the first models to use the company’s current design philosophy when it was launched in 2008, so although a facelift late last year refreshed the car’s styling, the hard points underneath mean this is no spring chicken.

You’ll have to look closely to spot the changes, too, as the SEAT’s overall shape is familiar, with a pair of sharply creased intersecting lines on the doors that, together with the flared wheelarches, give the Cupra plenty of presence on the road.

The deeper front bumper features a bigger air dam to improve cooling, while the four slots under the main grille help in this area, too. SEAT’s Cupra badge marks the car out as the most performance-focused model in the range, and the chequered-flag emblem is repeated on the bootlid.

The Ibiza is even more aggressive from the rear, with a trapezoidal central-exit exhaust and some small diffuser-style strakes that complete the bumper’s darker look. Combined with two big vents at either side the SEAT certainly has plenty of kerb appeal, although a small boot spoiler can still make the Ibiza look awkward from some angles.

Gloss-black 17-inch alloy wheels on the Cupra Black complement its bright white body, whereas the standard car gets regular silver rims. However, unless you’re a diehard SEAT fan, you’d struggle to tell the difference between the Cupra and the lower-spec FR model. Only the Cupra lettering across the bootlid distinguishes it, while the chequered flag badges are on the small side. 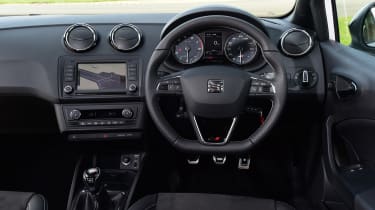 As with the exterior, the updates inside haven’t changed the cabin’s basic appearance, as the dashboard still curves away from you. Yet on this new car, higher-quality, soft-touch materials and an upgraded infotainment system make the Ibiza easier to live with. Sports seats are standard, plus there's gloss-black trim on the dashboard.

The centre console on the Ibiza Cupra contains a 6.5-inch touchscreen operated satnav and audio system, and it’s available with MirrorLink, Apple CarPlay and Android Auto to enable seamless connectivity with your chosen smartphone. With SEAT DriveApp you can access features like weather updates, and social media feeds, which the car will read aloud to you as you drive.

For a supermini, there’s plenty of useful storage space in the cabin, including decent-sized door bins, a large glovebox and a deep centre console cubby. There’s also plenty of seat and steering wheel adjustment, so it’s easy to find a comfortable driving position. The stereo is fiddly to use, but you do get a decent glovebox and useful door bins. The old car's sat-nav that clipped into a slot on the dash top has been replaced by a fully integrated touchscreen system that's intuitive to use.

There Ibiza has plenty of leg and headroom for the driver and front passenger, and the sport seats are comfortable over long distances. Access to the back seats is tight thanks to a lower roofline and smaller doors, and once on board, rear cabin space is on a par with the likes of the Peugeot 208 – so taller adults will struggle to get comfortable. 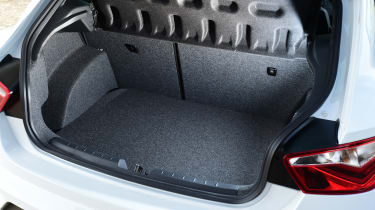 A 292-litre boot isn’t anywhere near the best in class, but it’s a healthy 88 litres larger than the platform-sharing VW Polo GTI’s. However, this is partly due to the VW’s greater underfloor storage – so, while the Ibiza can swallow more luggage, the Polo gives you extra security with its ability to store things out of sight.

Updated platform means reliability shouldn't be an issue, but dealer performance is not highly rated

SEAT dealers performed poorly in the 2014 Driver Power survey, finishing rock-bottom of our dealer survey, and the year before in 2013 the previous generation Ibiza finished 144th out of the 150 cars in our survey sample. The manufacturer is trying to address this by upgrading its network, and we’ve seen an improvement in 2016 as SEAT was rated 18th overall out of 32 manufacturers.

We will have to wait and see if the changes make a difference to the Ibiza model though, as in 2015 and 2016 there weren’t enough Ibiza owners taking part in the survey for the car to be included. 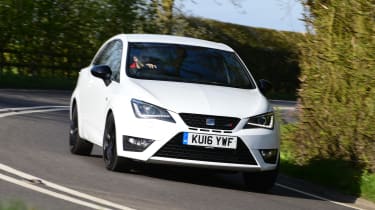 Still, the Ibiza has been in production for a few years now, so most electrical and mechanical problems should be ironed out.

A raft of standard safety kit helped the Ibiza achieve a five-star Euro NCAP crash test score back in 2011, while kit such as xenon lights, tiredness-recognition, a tyre-pressure monitor and SEAT’s Multi-Collision Braking feature that applies the brakes after a crash to help avoid more impacts all comes as standard. However, there are only four airbags – curtain bags are a £200 option – while rear seat curtain airbags are available for £195.

There’s a three-year/60,000-mile warranty as standard with the Ibiza, but you can extend it at extra cost to five-years/90,000 miles.

SEAT offers a pre-paid servicing pack that costs £498 for three years or 30,000 miles of cover, which should make budgeting a breeze even if the price isn’t super-competitive. 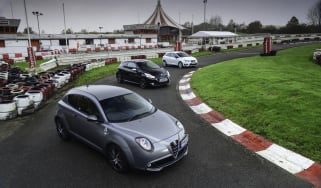 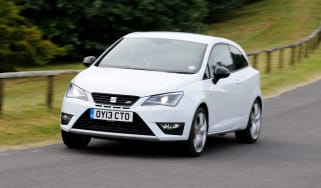