If you’re after a fast estate car the SEAT Leon ST Cupra is a top choice, but fewer than 50 of this limited run are UK-bound 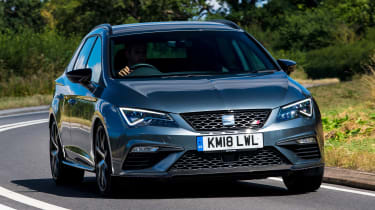 Even in its advancing years, the SEAT Leon ST Cupra remains a fine choice for those after a fast estate car. We’d argue whether this Carbon Edition model is worth the extra cash, but many will favour it on exclusivity alone. Fewer than 50 will come to the UK, so if you want one you’ll need to act fast.

It’s not uncommon for car makers to launch revenue generating special editions as a model reaches the end of production.

The tweaks are less extensive than those on the Cupra R, but exclusivity is on par. SEAT won’t divulge exactly how many are reserved for British buyers, but we’re told “fewer than 50” will reach UK showrooms. Priced from £35,575, that’s £2,400 more than the 4DRIVE and DSG-equipped model on which it is based. 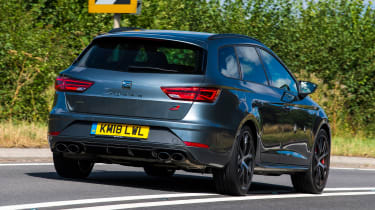 For your extra cash you get – as the name suggests – plenty of carbon trinkets. Available only in Monsoon Grey, the Cupra 300 Carbon Edition gets carbon fibre side blades, as well as carbon fibre front and rear diffusers. There’s a set of unique 19-inch alloy wheels, and quad-exit exhausts.

Unlike the Cupra hatch, which recently saw a 10bhp power dip due to the latest WLTP emissions regulations, the estate version retains its 296bhp 2.0-litre turbo engine. The only mechanical alterations for the Carbon Edition, in fact, are the Brembo brakes, which add fierce stopping power to the ST’s performance roster.

Otherwise, this Leon drives just like the standard Cupra. It feels ferociously quick, but with the added security of all-wheel drive, the wagon doesn’t squirm quite like the hatch. It offers traction in spades, with very little body roll through fast corners.

Despite using the older six-speed DSG transmission, the gearbox shifts quickly and smoothly. The short paddles aren’t as tactile as those in some of the SEAT’s rivals, however, and even in manual mode it’ll change cogs automatically as it hits the redline. In Cupra mode, full throttle upshifts are accompanied by a fabricated rasp from the exhaust.

The ride isn’t quite as accomplished as in a Volkswagen Golf R Estate, and refinement – especially on these 19-inch wheels – is particularly poor. Road noise is apparent from little more than town speeds, while rough motorways create an intrusive din. Still, the Cupra-branded bucket seats are supportive and comfortable on longer runs. 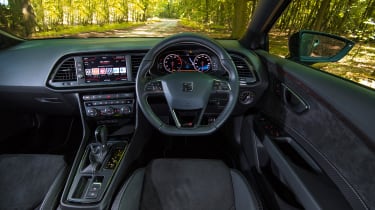 Along with all the carbon add-ons, this was our first opportunity to try SEAT’s Audi-inspired digital cockpit dials. While they are easily configurable using the steering wheel-mounted controls, the graphics aren’t as sophisticated and the fonts feel less premium. It’s a shame, because functionality is fantastic, with the ability to show full-screen mapping, trip detail and media info – all in place of the conventional speedo and rev counter.

Elsewhere, quality is good, if (again) a little way shy of the equivalent Volkswagen. The biggest problem, however, is the Golf is ever so slightly cheaper than this limited run Leon, too.