Limited-run SEAT Leon Cupra R ups the ante with 306bhp, but is that enough to topple the best cars in the class? 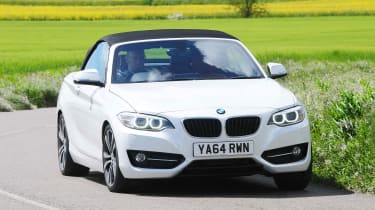 It’s a shame you can’t go out and buy a Leon Cupra R, because the sportier Spanish hot hatch is right up there with the best cars in its class. While rivals choose to boost power and add four-wheel drive, the Leon strips things back to basics and is all the better for it. If you can find one, you won’t be disappointed.

Thanks to complex four-wheel-drive systems, high-power engines and grip-inducing tyre technology, the 400bhp hyper hatch is no longer a pipe dream.

But while rivals are turning up the wick with unflappable, supercar-baiting family cars, SEAT has kept things simple. Incremental upgrades have ensured the Leon Cupra remains relevant, but is the brand’s latest effort the best of the lot?

We first drove the limited-run Cupra R in Spain late last year, and came away impressed by the car’s punchy powertrain, playful chassis and sweet steering. In fact, it all but fixed the standard car’s few failings, turning the fire-breathing Leon into a proper rival for cars like the latest Honda Civic Type R. 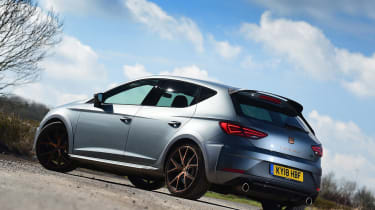 Back on UK roads, little has changed. The SEAT Leon Cupra R is still a fine hot hatch, feeling harder, more responsive and altogether more complete than the ageing Cupra 300. The 2.0-litre turbo engine is as eager as ever, offering endless punch and a familiar yet slightly synthesised growl. In fact, the Cupra R feels incredibly quick point to point.

Slacken things off and it sits on the motorway just like any other Leon, despite the firmer settings and big wheels. Things are a bit rough in the car’s Cupra mode, but fiddle with the Individual set-up and you’ll strike a beautiful balance between hardcore hot hatch and comfortable cruiser.

The Brembo brakes are super sharp, offering loads of feel through the pedal, while grip is astounding. Push too hard from a standstill and the tyres will scrabble for traction, but once you’re up and running the R’s standard-fit front differential and wider track makes for frankly alarming cornering pace. The snickety six-speed manual gearbox is unchanged, but allows for quick and precise changes without feeling unnecessarily weighty. 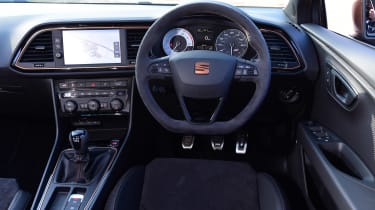 In addition to the pokier engine, bigger brakes and chassis tweaks, the Cupra R comes covered in unique copper trim. The coloured accents aren’t yet available elsewhere in the current SEAT range, though they’re likely to feature on the forthcoming Ateca Cupra – the brand’s first model from the standalone high performance sub-brand.

Fortunately – or unfortunately, depending on your point of view – the matt paint on our European test car isn’t available in the UK. British buyers will get a choice of black or metallic grey (as tested here), while 19-inch copper coloured wheels, part-Alcantara trim and carbon trinkets are standard.

Every version gets SEAT’s intuitive eight-inch infotainment display, as well as Apple CarPlay and Android Auto connectivity. Once more, eveything on our car came as standard, including those excentric alloy wheels, copper accents and sculpted sports seats. The navigation system works well, too. The deep 380-litre boot is unchanged from the standard Leon hatch and the high loading lip means it isn’t as practical as some rivals, though an ST estate version is on the way.

Yet the Cupra R’s biggest problem is its exclusivity. Just 24 are coming to the UK, and every single one is accounted for. That means, even if you’ve got the extra £5,095 (over the standard car) burning a hole in your pocket, there’s little chance you’ll be able to lay your hands on one. We can only hope SEAT applies the various tweaks to conventional Cupras in the months to come.