The SEAT Leon Cupra gets a power boost for 2017 and while it's fast, it's lacking a little sparkle 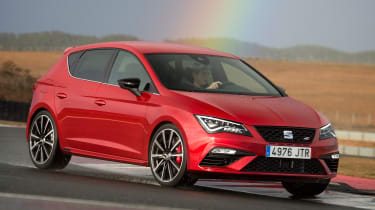 If you’re in the market for a 300bhp hot hatchback, the Leon Cupra 300 should definitely be on your list for consideration. It’s a rounded, extremely competent and genuinely rapid device, and while its price looks a little high, it goes some way to making up for this with an extensive equipment list. What it is not, sadly, is a really sparkling driver’s tool that can rival a Volkswagen Golf Clubsport or a Ford Focus RS. Perhaps a Cupra R will come along to fill that brief. But in the meantime, we have to file the Cupra 300 under ‘more fast than fun’.

The SEAT Leon Cupra has been a fixture on the hot hatchback market ever since it first appeared as a V6 model back in 2000. In its most recent incarnation with four-cylinder power, it has seen outputs of 261bhp, 276bhp and, most recently, 286bhp. Now SEAT has ramped it up again, with the Cupra 300.

The Cupra 300 is, in fact, the most powerful SEAT road car ever. It gets a retuned version of the familiar VW Group 2.0-litre turbocharged petrol engine, producing 300PS (hence the badge) - or 296bhp in UK numbers. There’s more torque, too, as the old Cupra’s 350Nm is boosted to 380Nm - and that figure is available across an impressively wide band, from 1,800rpm to 5,500rpm.

With that combination of four-wheel drive and a dual-clutch box, the ST manages to overcome its extra weight to be the fastest accelerating of the bunch; it can crack 0-62mph in just 4.9 seconds. But the others aren’t far behind; a manual SC takes 5.7sec, while a five-door with the same gearbox requires 5.8. You can cut a tenth off those manual-transmission times if you choose the automatic model. But regardless of spec, all Cupra 300s have a limited top speed of 155mph. 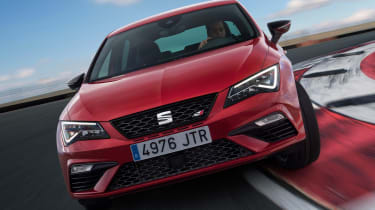 On the outside, the Cupra 300s get different front and rear bumpers, bespoke door sills, a rear roof spoiler, 19-inch titanium-finish alloy wheels and red brake callipers with the Cupra logo. It’s quite an arresting look, in fact - particularly as an SC, whose overall appearance switches from pretty to muscular. The ST, meanwhile, can be the epitome of discreet performance or a lairy hot-rodder, depending on your choice of paint job and wheel colour.

Inside, there’s an eight-inch touch-screen display instead of the old Cupra’s 6.5-inch unit, plus sports seats that manage to be supportive without feeling too claustrophobic. You now get an electronic handbrake instead of the proper lever, too. But beyond the gloss-black detailing and the flat-bottomed steering wheel (complete with Cupra logo, naturally), there’s not an enormous amount to remind you that you’re in the range-topping hot hatchback. As with all Leons, it’s neat and functional – but any Spanish flair is well hidden.

We’re focusing on the three-door SC and five-door hatch here. The good but unsurprising news is that these cars feel fast; there’s perhaps a slight hesitation in second gear, almost as if the system is limiting the torque levels to protect the transmission, but it doesn’t half kick on once you’re up and running. The engine will rev to more than 6,000rpm, and while it’s not the most characterful of notes, it’s never harsh. The DSG gearbox will give you staccato rasps from the exhaust on upshifts, too. 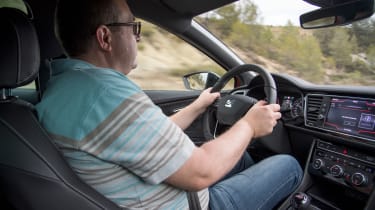 Equally impressive (and this is not something that you could say for all of Cupras in the past) is the ride quality. It’s a nicely judged mix, allowing the Leon to hang on impressively in corners while not cracking your fillings over speed bumps.

You can tweak the settings of the Leon’s adjustable hydraulic dampers as part of the standard-fit Cupra Drive Profiles, although it makes only a mild difference. The same can be said for the engine settings and steering profile - although at least you can set up your own preferred blend so you can make the most of the small variations.

So it’s as fast as you probably need a hot hatchback to be, compliant to the point of being comfortable, and pretty well specced. But we ought to say at this point that the outgoing Cupra 290 didn’t exactly feel slow when we tried it in May last year. And therein lies a bit of a problem - because we can’t help but feel a little frustrated that SEAT has just gone after more power (an easy target, given the VW Group parts bin) instead of delivering something to really make the Leon stand out as more than just a cheaper Volkswagen Golf R. 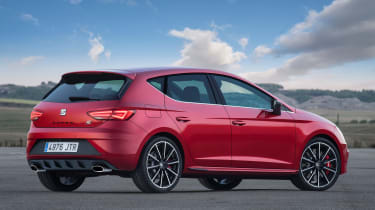 Take the steering, for example. It’s accurate enough, true, so you soon learn to trust it on twistier roads. But there’s a little bit too much slack around the straight ahead, and this never feels like a car that’s dancing on its nose. It’s hard to forgive the brake pedal modulation, too, which makes it hard to heel and toe on the manual, and impossible to overlook the configuration of the gearstick in the DSG versions, which forces you to push forwards to shift up. That said, many will favour the steering wheel mounted paddles – though frustratingly there’s no fully manual mode, as the transmission software automatically kicks up as you hit the red line.

Foibles like these give the impression that despite all of the marketing claims, SEAT’s motorsport team has actually had relatively little input here - and that the Cupra 300 is, when all’s said and done, a box-ticking exercise in how to build on existing strengths instead of an attempt to really develop something new.

It’s a commendable, astonishingly competent effort in lots of ways, but a little bit cynical in others.